House on Fire: A Novel 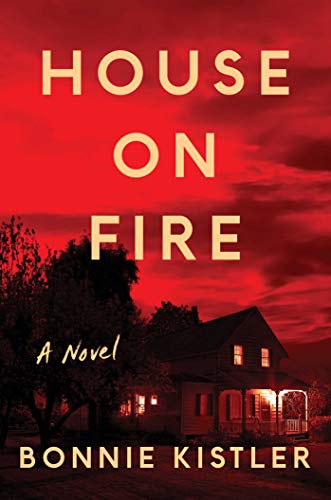 Divorce attorney Leigh Huyett believed she had it all: a loving second husband, a mixed family consisting of her 20-year-old twin sons and her delightful 14-year-old daughter Chrissy. Builder Peter Conley, to whom she's been married for five years, adores her as well as his two children, 17-year-old Kip, and 10-year-old Mia. They all bond well, living in a spacious home with horses, barn cats, and Shep, their canine. Life couldn't be better.

Pete and Leigh are away celebrating their anniversary, not expected back for another day when Chrissy learns they are on their way home. Kip, supposed to be caring for her, is at a party rejoicing over his acceptance to Duke, so Chrissy rides her bike to warn him to come home before their parents do.

Kip is slightly inebriated after a few beers, and Chrissy, ever the rule follower, insists she drive, even though she is not old enough. Kip got a DUI earlier in the year and lost his license, and she's afraid he'll be in more trouble if they are stopped. They take the back way home to avoid cops or traffic and it is raining. Chrissy swerves to miss a dog running into the road, crashing crash into a tree and landing in a ditch.

A nearby neighbor hears the crash and calls 911. Kip hops into the driver's seat so they won't see Chrissy behind the wheel. Kip's issues a breath test, and they are taken to the police station where Chrissy phones her parents to alert them where they are. Though stating she's not hurt, Chrissy is transported to the hospital. Hours later she dies.

An undetected aneurysm explains Chrissy's death, yet Kip's "reckless" driving is said to perpetuate its rupture. When Kip states Chrissy had been behind the wheel and hadn't hit her head, no one believes him. He also says a priest stopped at the scene to see if they were okay. A search is on for the said preacher to corroborate Chrissy in fact, was operating the truck. Unfortunately, the unknown man cannot be found, and Leigh does not believe his story. She feels he is covering his guilt, using her dead daughter to exonerate him.

Gone is the blissfully, happy blended family. Leigh, wracked with heartache is unable to function for a long time. She loves Kip but is grieved to be around him, so she asks Pete to send him to stay with his mother and stepfather. Not wanting to go there, Pete takes Kip to the new home Pete is building, heartbroken for this turn of events. Both he and Kip loved Chrissy, yet Pete now faces the battle of who comes first, his wife or his flesh and blood.

One day, Leigh drives down the road where the accident occurred, spotting a priest riding by and follows him home. Well-known and on sabbatical, he invites Leigh into his rental cottage while she explains her reason for following him. They share a common sorrow as he lost his son a year before by an armed burglar. Leigh finds solace talking with him and they meet every week.

"'No, don't. We should never apologize for grief. It doesn't mean we're weak. It's simply the price we pay for love.'

"It's too high a price. It has costing her everything."

Leigh goes back at work and gets mysterious phone calls from a Qatari wife who desperately seeks a divorce from her abusive husband, but she must do this in secrecy for he is a powerful diplomat and will not allow her to leave him. Leigh gets involved in a cloak-and-dagger situation, but it takes her mind off Chrissy.

While Kip awaits trial, Leigh is trying to attain custody of a war hero's child, find a missing pregnant daughter of a client who runs a rescue mission for older horses, maintain a friendship with an Episcopal priest, deal with her flighty ex-husband and his wife as well as her twins, Peter's obnoxious ex-wife, and her husband. There are way too many plot lines in this novel. Though they are of interest, they make one wonder what they have to do with the "perfect blended family" now falling apart.

Leigh and Pete both offer their own point of view with a high emotional content. This should highlight family experiences without adding more confusion. The pain and sorrow is handled well, and should be the crux of the tale without additional storylines slowing down the flow. The suspense and intrigue do offer a diversion, but may be better suited for another issue or two in a series.