A House Divided: A Lincoln and Speed Mystery 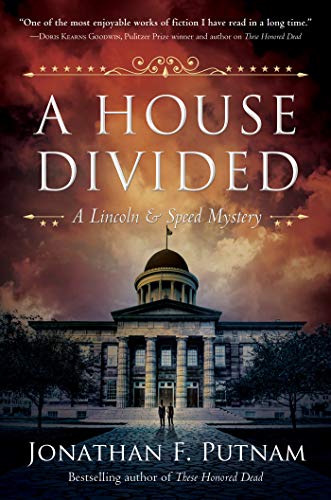 “Lincoln scholar Putnam has once again woven a fact-based story into an entertaining fiction for his readers to enjoy.”

Lawyer Abraham Lincoln is about to try a murder case, but it’s one of the oddest he’s accepted yet because there’s no corpse.

It all begins when the postmaster gives the sheriff a letter passing through his office. In it, someone states a man called William Trailor has been spending a great deal of money, saying it was left to him in his business partner’s will.

“The writer believes the unfortunate Mr. Fisher is the victim of foul play. When last seen, he was heading toward Springfield in the company of William Trailor.”

Soon, William Trailor and his brother Henry are behind bars, arrested for murder. Henry immediately turns on his brother, and gets himself released when he accuses William and another brother, Archibald, of committing the crime.

This fact is of particular interest to Speed, Lincoln’s roommate and friend, because Archibald Trailor saved Speed’s life when they were trapped during the Sudden Change, a freak ice storm striking as they returned by horseback from Chicago.

“Even without a dead body, Archibald and William Trailor were going to face murder charges in light of Hunry Trailor’s confession. Archibald had saved my life. Now his own hung in the balance.”

Though William is represented by a lawyer so fresh to the profession he’s still quoting his law school texts, Lincoln is hired by Archibald, a good soul who’s too loyal to his older brothers and, while not simple-minded, is not a very complex person.

There are a couple of twists to the case that will either help or hinder the verdict but Lincoln knows his way around a courtroom and soon proves nothing is as it seems.

The Illinois lawyer has other worries on his mind besides a murder case, however. A young woman has arrived in town, sister-in-law of a friend. She already has a coterie of suitors, among them Lincoln, his rival Douglas, and—surprisingly—Speed.

“Lincoln was one of the oldest bachelors in town and I thought it past time for him to have a wife. I vowed to help him with this task, but quickly found myself beguiled by Miss Todd’s considerable charms.”

Mary Todd has made it clear which of the three is her choice, but die-hard Speed insists on courting her anyway. Lincoln doesn’t take too kindly to this, and soon the two friends are battling it out in public, with both words and fisticuffs.

“I launched myself across the table, toppling him onto the floor and landing on top of him. He managed to roll over while he matched me blow for blow. All the while we shouted terrible things at each other, things I doubted could ever be taken back.”

Since Speed has always assisted in investigating Lincoln’s cases, will this breach harm Archibald’s case?

Another problem to be met is the case of a Chicago bank, embezzled of enough of its gold that it may have to close. Lincoln has arranged for a loan to be made from the Rothchild bankers. Now, adding to the turmoil in town, a rumor is going around that the man saying he represents the Rothchilds is an imposter, and the gold he’s offering to loan the state is counterfeit.

If it’s true, how will that fact affect Lincoln’s reputation when bankruptcy sets in?

Played against the historic event of embezzlement of a Chicago bank by an employee and the state of Illinois arranging a loan from foreign bankers to replace the lost gold, this story is full of true incidents tailored to make a believable fiction.

An interesting aside: Nothing is made of the fact that the postmaster opens a letter, reads it, and turns it over to the mayor. Perhaps there were no laws about tampering with the US mails at this date in time.

The story is rife with subplots, one being the plight of Irish workers on the canals, living unpaid because of the bank’s loss of funds, as well as Lincoln’s courtship of Mary Todd, hampered by Speed’s interference.

The mental picture of the staid-appearing Lincoln and his best friend pummeling each other like angry schoolboys presents a picture definitely not found in any history books.

As in previous Lincoln & Speed stories, Lincoln’s comprehension of law, as well as his down-home and wily knowledge of human nature plays a great part in the coming verdict. Whether true or not, A House Divided is a great read. Lincoln scholar Putnam has once again woven a fact-based story into an entertaining fiction for his readers to enjoy.