In the House in the Dark of the Woods 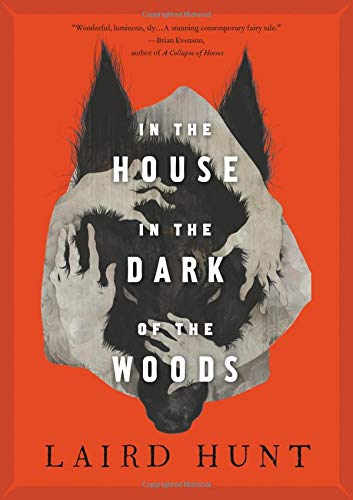 Threaded with magic and peril, Laird Hunt’s latest novel explores the wilds of colonial New England through the lens of a missing woman. Equal parts fairy tale and literary thriller, In the House in the Dark of the Woods tells an unexpected story of servitude, deceit, and surprise.

The novel opens with a woman in the woods. “I told my man I was off to pick berries and that he should watch our son for I would be gone some good while. So away I went with a basket.” From the start, Hunt’s language establishes the oddness of this world: it is vague and distant, nearly an abstraction.

The people the woman leaves behind remain nameless (man, son), but in the woods, she meets Captain Jane. Captain Jane wears a dark string around her wrist and a long scar down her cheek. She smells “foul and fair,” and the first thing that comes from her mouth is laughter. She has powerful roots in a small bag that can relieve tiredness and pain and turn eyes to “lanterns to pierce the dark.”

“‘Eliza?’” the woman asks, for it is the first specific name given in the story. Jane, after all, is the name given to nameless women: Jane Doe.

A voice from the house calls, “‘It is a common enough name!’”

Common or not, it is a moment of precision in an otherwise indefinite world. The cast of the woods grows to include a “first-folk” man, a little girl dressed in yellow, and Granny Someone, yet Eliza remains the only one with a clear, distinct name.

She is kind, this Eliza, bandaging the woman’s bloodied feet (back in the berry hunting, the woman removed her shoes to walk in the creek before becoming lost). Eliza slaughters a young pig and makes a fine meal. She has animals and gardens and a lake—all down a path out of sight of the house. She calls the lost woman “Goody,” a nickname for someone kept—a good girl, a good wife, a good daughter.

The warmth of Eliza’s house is not unlike the initial warmth of the witch’s cottage in Hansel and Gretel. It is too good and too welcoming, like Eliza herself.

Still, Eliza sets the woman free with healed feet and a bundle of food. When the woman asks if Eliza will share the beginning of the walk with her, Eliza replies, “‘Oh, I never leave this house and its fine gardens.’”

Like the woman’s own disappearance, Eliza’s presence in the house is ambiguous. She may be there by choice, and she may be a prisoner. The woman may have accidentally gotten lost in the woods, and she may have intentionally wandered away. Though there are times this ambiguity begs clarity, it is ultimately the driving force of the narrative: What is it these women want and to whom are they indebted?

It is, of course, no surprise that the woman’s first attempt to get home to her man and her son fails. Again, Captain Jane finds her and returns her to Eliza’s. And again, Hansel and Gretel come to mind in the form of foiled attempts. If it wasn’t clear already, it’s abundantly clear now: This is a fairy tale.

As the woman’s past begins to unfold in flitting moments of recollection, traditional fairy-tale themes weave their way into the story—abuse, neglect, violence, betrayal, faith. In order to understand both the woman’s actions and Eliza’s, the pieces of the past must be woven into the events within the house in the woods. It is a treasure hunt and a delightful, terrifying puzzle.

Like many puzzles and hunts, some pieces go missing or never quite find their place. There are threads that never come back around and moments that feel superfluous (the epilogue, for instance). However, Hunt’s woods are magical enough to allow for such gaps, and the story’s imbedded questions drive the narrative quickly past these small hiccups.

Possibly the most compelling element of the novel is its innate exploration of storytelling itself. Back in the basement of Eliza’s house, the woman is faced with pen and paper. She has been discouraged from reading and writing and reluctant to practice for fear of her man’s scolding.

But in Eliza’s basement, she explores the power and permanence of writing a tale. She thinks, “A tale is a funny thing, and even when it’s your own and you have a quill in your hand you must be careful where you touch it.”

Like many other moments in the novel, this one serves multiple purposes. It is both a caution for the woman, but also a rumination on craft. There are innumerable pieces to any given story, and they must be deliberately and precisely chosen. What is absent is just as necessary as what’s included. The woman warns us that storytelling is a business that requires diligent care, and the novel Hunt has constructed around her serves as a brilliant example.