The Fall of the House of Cabal (Johannes Cabal Novels) 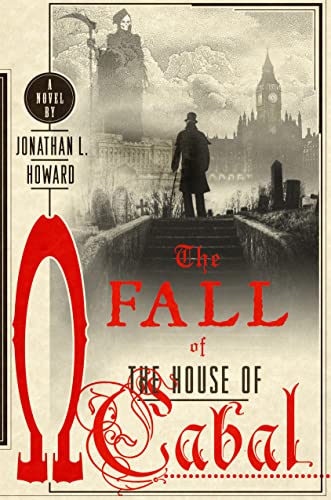 A necromancer, a witch, a vampire, and a devil walk into Hell . . .

While this could be the prelude to a bad joke, it’s also a fair summation of the plot of The Fall of the House of Cabal.

Truthfully, trying to synopsize this novel is similar to telling someone of a dream. It makes sense while it’s happening, with even the most weird juxtaposition of events having an acceptable logic, but when attempting to relate it to another person, what made sense while sleeping ineffably becomes so confusing when awake as to be simply chaotic imagery.

Believing he has found a clue which will lead to discovering a personally needed cure for death, Johannes Cabal, necromancer of no mean power, journeys to Hell and a couple of other places, assisted by his vampiric and often hapless brother, Horst, the brilliant criminologist Leonie Barrow, and Madame Zarenya, a half-arachnoid devil who likes nothing better than to spend her days fulfilling her succubus tendencies.

To say more would be spoiling the fun of allowing anyone to read the book him- or herself.

One cannot rely on a second-hand description of this novel except as a recommendation. Otherwise, it must be experienced first-hand.

This is one of the most entertaining, and amusing novels recently out in the genre. In the narrative, in which the author often speaks directly to the reader via footnotes, there are twinges of Douglas Adams, a sprinkling of Monty Python, the occasional pun, and a dash of Richard Armour—all wrapped up neatly in Jonathan L. Howard’s own dry and very talented wit.

If the reader has never had the pleasure of perusing any of the other novels in the Cabal series (though he is urged on page six—by the author himself—to stop then and there to go back and do so), he will have no idea what a delightful story this is going to be . . . and delightful it is, full of a fantasy-filled narrative punctuated with a plethora of wry and imagination-piquing words of more than four syllables—all of which will illuminate and educate the reader while entertaining. Truly an imaginative use of syntax.

To pluck a passage from the story:

“They proceeded with the curious feeling that they were in a play, which—in a manner of speaking, they were . . . a theater of improvisation that came with a butcher’s bill. Well-stocked with mechanicals, it also put real lives into jeopardy, and also took them.”

As for the fall of the House of Cabal itself . . . literally, figuratively . . . it’s the reader’s choice which way to interpret that.

If you like paranormal novels containing characters with sly humor and pithy wit, The Fall of the House of Cabal, will definitely be your cup of tea.