Hour of the Witch: A Novel 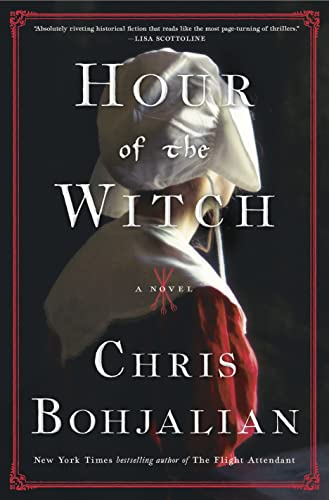 “In a page-turning vicious and psychological death spiral, Hour of the Witch will surprise with plot twists and character arcs stunning in their visual details.”

In this brutal and timely thriller, we are presented with an original Handmaid's Tale. But this is not another dystopian novel of witches and zealots. Like Margaret Atwood's Handmaid, this is a cautionary tale.

The main character—Mary Deerfield, a devoutly Christian 24-year-old woman of great beauty and intellect—is from a very wealthy family that emigrated from England to Boston to expand the Deerfield export-import business. Unbeknown to her parents for most of  Mary's marriage, her husband Thomas is a pathologically cruel mill owner who conceals his brutal behavior from his church and community. And now Mary desperately wants a divorce in a city that has only given a total of seven divorces up until 1662—for adultery, cruelty (measured by the dimensions of the battering ram), and ironically, impotence.

The more alarming charge against Mary Deerfield is the indictment for witchcraft. She is a truthteller in a community that has already decided on what is the truth. She stumbles and falls but gets up with bloodied knees and a defiant spirit. And Mary Deerfield is prepared to die.

Chris Bohjalian, the author, in a recent interview with fellow author Jodi Picoult,   described how he wrote Hour of the Witch during the Brett Kavanaugh's Sentate hearings, when he realized that nothing has changed about women's sexuality and credibility as people who can bear witness. Bohjalian has concluded that: "We always believe the male."

In one memorable scene, Constance Winston, an elderly woman who lives alone in the Neck, rages at the community's hypocrisy in hanging an independent woman for witchcraft: "She was sent to the scaffold because she had a sharper tongue and a shrewder mind than her accusers. It is always the case when men hang women. . . . there is nothing that frightens a man more than a woman who does not live happily under a man's thumb."

Chris Bohjalian climbs inside the head of the fervent believer in witchcraft as well as inside the minds of those who simultaneously doubt the existence of witches, yet cling to the belief in the devil. The author accomplishes an extraordinary feat, quietly devastating: in its grasp of the cult, the innocent, the abused, and those who are raised to doubt themselves.

In a page-turning vicious and psychological death spiral, Hour of the Witch will surprise with plot twists and character arcs stunning in their visual details. The psychologically logical motives of cult followers are a gut-punch to those who cannot grasp the power of group-think.

Applause is due for plumbing the depths of historical research (including studying preserved documents of an accused witch who threw her diary into an outhouse before being executed in the 1660s), and most of all, for interweaving the madness of witch hunts, past and present!

"Yes, this may be the hour of the witch. But the Devil? He most definitely wears breeches. The Devil can only be a man."

One of the truly memorable novels this year!