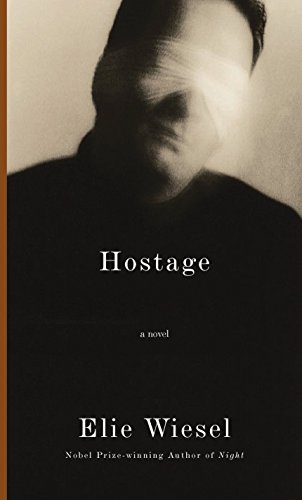 “Hostage is destined to stand alongside Night as a masterpiece: a convincing story imbued with purpose, meaning, and an elegantly disguised sense of moral conviction.”

Hostage, Elie Wiesel’s latest novel is a powerful examination of the Holocaust, the Israeli/Palestinian struggle, the power of memory, and the desire for emotional resolution.

It is set in 1975 New York City. Shaltiel Feigenberg, a gentle Jewish husband, professional storyteller, and writer is abducted from a Brooklyn street by an Arab and an Italian. He is placed in a basement, bound, and blindfolded. His life is to be exchanged for imprisoned Palestinian terrorists. Although Shaltiel is unknown to almost everyone, his abduction and captivity generate global news attention.

As the world waits apprehensively for his release, Shaltiel regales his captors with stories of his family, his childhood spent hiding from Nazis, the compassion of Russian soldiers who liberated him, and his older brother who turned from Judaism to communism and later escaped from Stalin’s ruthless leaders. All the while, his rescue has become paramount for every police officer and spy, as well as for leaders of the Western nations, the Israeli government, and the global news media.

Tied up and blindfolded in a dark basement, Shaltiel gradually unravels the fabric of a life filled with brutality, captivity, remorse, and fantasy. He struggles to find meaning among memories coated with fear and remorse.

On the emotional front, his Arab captor is filled with anger and cruelty, hurling anti-Semitic invectives, engaging in physical brutality, and he torturing Shaltiel. The Italian captor is less violent; he is a listener motivated by political purpose and an eye toward insurrection. His goal is to change the beliefs and habits of the masses in order to foment revolution.

Author Wiesel’s use of metaphor in Hostage is superb. Through his characters, he examines mankind’s history, meaning, and purpose. The Arab is the killer. His goal is to use imprisonment and murder to intimidate Americans and Israelis. He is willing to capture and kill any Jew in order to further his cause: the destruction of Israel and the establishment of a Palestinian state.

The Italian is the intellectual, fighting for the poor, weak, and oppressed. Less violent than the Arab, he has allowed himself to be influenced by the killer’s tactics and purpose.

Shaltiel is the tormented Jew who, having survived the Shoah, struggles to find meaning in the stories he has spent a lifetime collecting.

The essence of Mr. Wiesel’s purpose seems an examination of man’s inhumanity to man. His writing style is vivid, the characters captivating and well developed, manifesting a veritable constellation of emotions and experiences.

Through Shaltiel we feel a prisoner’s trepidation, doubt, humiliation, and degradation. The physical brutality of his Arab captor is contrasted by Shaltiel’s affectionate personality and the warmth and tenderness of his memories.

Beyond this, each of the characters anthropomorphizes the politics of nations and ideological movements in which some fight for Israel’s right to exist and some fight for its—and its people’s—destruction.

Shaltiel’s rocky relationship with his wife, Blanca, is examined as he comes to realize his family name and lineage will end with his death. If the novel has any weakness it could be in overly detailed treatment of both Shaltiel’s married years and Blanca’s personality.

With Hostage, Elie Wiesel has once again delivered a novel of intense, express purpose. The pacing is steady and intense, leaving the reader in a constant state of anxiety as to the kindhearted Shaltiel’s fate: murder or freedom? Elie Wiesel adroitly manipulates this anxiety to the very end. The prose is imposing and convincing as Wiesel delivers a ground zero examination of the Holocaust years, the rescue of a small number of incarcerated Jews, the collapse of tolerance among Soviet leaders under Stalin, Israel’s independence, and finally 1975 Brooklyn—all with beauty, skill, and grace.

Hostage is destined to stand alongside Night as a masterpiece: a convincing story imbued with purpose, meaning, and an elegantly disguised sense of moral conviction.