Horses of God: A Novel 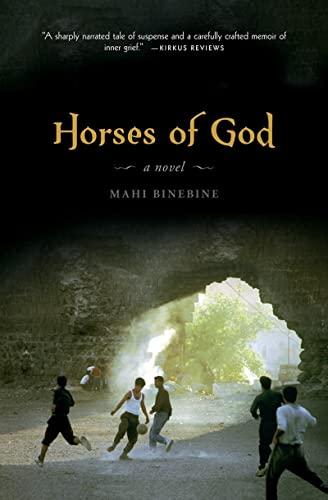 Is anything more frightening and mysterious to the modern American than the Islamist suicide bomber?

The act of suicide bombing combines two horrible acts into one: mass murder of innocent people with the decision take one’s own life. Yet sadly modern history proves there is a combination of amorality and personal desperation bringing many people to the point where suicide bombing becomes an action of choice.

Mahi Binehine’s Horses of God (translated from the French by Lulu Norman) profiles the lives of a group of young men as they drift from poverty to radical Islam to worst kind of terrorism.

To profile this challenging topic, Mr. Binebine selects a neat narrative device last employed most successfully by Alice Sebold in The Lovely Bones: the book is narrated by a dead person, here by a suicide bomber, Yachine, as the ghost of himself telling the reader about the life of his friends.

Yachine, his older brother Hamid, and their friends are from Sidi Moumen, a slum on the outskirts of Casablanca, Morocco. They are exceedingly poor and spend much of their day rummaging through the city’s garbage dump cutting strands of copper wire out of discarded tires. They are from broken families: one is the son of prostitute, one is an unloved child blamed for the death of a favored brother.

Despite their tough circumstances, their lives are not without some pleasures: the occasional cigarette laced with hashish and soccer victories over the teams from other slums. Mr. Binebine is at his best in narrating the petty pleasures and grim realities of Sidi Moumen. His voice is journalistic—neither begging the reader’s sympathy nor romanticizing the hardscrabble existence.

It is only in the final third of this small book that the boys become aware of the larger world around them and drift into radical Islam. This is through exposure to the seemingly benevolent Abu Zoubeir who attracts them with martial arts training, good food, and better jobs. The boys become religious for secular reasons. The embrace of Jihad is incremental.

Eventually, they willingly prepare for martyrdom, convinced of paradise in the afterworld and success in their final Earthly errand because “you cannot defeat a man who wants to die.” Inspired by this, they commit the most deadly act of terrorism in Morocco’s history.

Horses of God has some difficult moments. As with many translations, parts of the original text translate awkwardly, i.e., Yachine’s girlfriend’s breasts are “ripening pears.”

More troubling are discussions around homosexuality—including a scene in which the boys rape one of their male friends. The treatment of this topic reads as otherworldly in book that is otherwise very realistic. The misalignment is not necessarily the fault of the translator, just recognition of the enormous gap between traditional Arab thinking and the modern American mind on certain topics.

Finally, the book may inadvertently create the impression that Arab terrorists come from the poorest classes, while many have actually emerged from more prosperous circumstances.

At only 162 fast-moving pages, Horses of God can be read in two sittings. This is a small investment to gain clear-eyed look at the Jihadi suicide bomber, one of the most frightening and mysterious phenomena in today’s world.