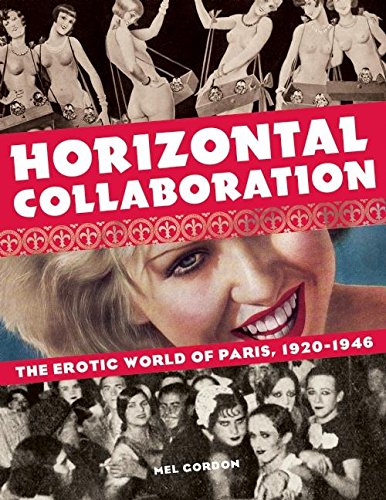 “an illuminating linguistic, cartographic, and historical exploration of Parisian lusts.”

Adding support to the historical narrative are lists of slang terms, maps, and a guidebook. The guidebook, assembled by Gordon from actual guides to Paris's disreputable establishments, provides a thumbnail sketch for the curious traveler. The brothel's location, décor, clientele, and cuisine are explained, along with the years each flourished.

In an introductory section, Gordon traces Paris's hedonistic exceptionalism back to the reign of King François (1494–1547), “the warrior-king, whose love of Italian culture and slim-hipped women nearly bankrupted the monarchy by the end of his reign.” Despite the “provisional divisions and maddening allegiances to a wide spectrum of creeds, dialects, extended clans, occupations, and political faiths, the inhabitants of fractious Gaul were united by a devotion to their cornucopia of earthly indulgences.”

Obsessive devotion to pleasure surfaced in the anti-clerical bawdiness of Gargantua and Pantagruel, by François Rabelais (1483–1553). During the American Revolution, Benjamin Franklin accommodated himself to Paris's sex tourist trade. Although sometimes the quest for sybaritic bliss went too far, as seen in the literary career of the Marquis de Sade (1740–1814), imprisoned in every French regime from Louis XVI to Napoleon. Paris's notoriety continued into the 19th and 20th centuries when the Decadence movement flourished prior to the conflagration of the First World War.

Gordon explores various aspects of Paris, from dance clubs to brothels to the criminal underworld and gay and lesbian subcultures. Each subset has its own slang and its own cultural mores. Brothels ranged from the high-class (maisons de société) to the unhygenic (maisons d'abattage; literally “slaughterhouses”).

The investigation into gay collaborationist activity represents a peculiar slice of life during the Black Years. Gordon profiles two notable gay collaborators, Violette Morris (also known as “Fat Claude”) and Maurice Sachs. As with the recently published Stormtrooper Families, the presence of gay collabos complicates the sexual politics and ideological seductions of the era.