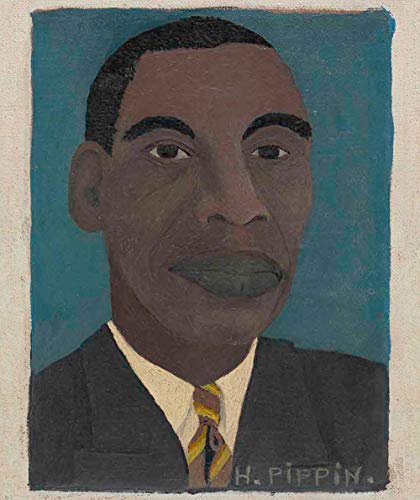 African American artist Horace Pippin was wounded on the battlefield in WWI, but it didn’t stop him from emerging as an innovative and groundbreaking artist in his generation. Art historian Anne Monahan’s Horace Pippin, American Modern is an in-depth analysis of the history and social scope of Pippin’s career and the impact he made with just 140 works of art that exhibited his aesthetic range and craft. Monahan provides heady text annotating a handsome volume of beautiful plates of Pippin’s artwork.

Monahan’s expansive study is illuminating and vital as it challenges previous studies of Pippin’s depictions of African American life in the Jim Crow era of segregation and blatant racism. Most pointedly, there is the question of the artist’s aesthetic and cultural intent by the white art establishment and moneyed patrons who knew how to exploit it.

Pippin was born in West Chester, PA. He was a self-taught artist, and despite starting late in his career as a professional he became successful as a folk and fine artist who soon attracted the attention of influential art collectors in Philadelphia, New York, and internationally. He also had solo exhibitions in major galleries.

One of the most instructive plates in the book is a Pippin self-portrait, which captures his visibly atrophied arm, but still at his easel wielding his brush and ready to paint. He depicted the battlefield in Europe where he was shot in the shoulder. Other stunning plates of his artwork in the book include his depiction of the hanging of abolitionist John Brown.

Monahan deftly sums up that Pippin started out being categorized as an “autodidact (self-taught) primitive” in the 1930s, and by the ’40s was being embraced by the art world as an innovative surrealist. His paintings of the battlefield of in Europe during WWI have still stun in their visceral and editorial impact.

His artwork has often been described in the subjective art jargon of the galleries and critics of the time. Monahan dissects all of the art and cultural politics that came into play in categorizing his work. At various times the white art establishment and academia called him primitive; among art historians he was called folkloric.

He painted landscapes, religious paintings, and pastoral depictions of rural poverty in the south, as well as vivid portraiture of moneyed white patrons in Chester County. Pippin also used distinctly different expressive styles in portraits of African Americans, including his wife and opera singer Marion Anderson.

It is a truism that all art is subjective, and influential art that has stood the test of time is ripe for fresh analysis when considered generations later. In Pippin’s era, it was subject to prevailing racism that could have ended any hope of having a successful commercial career.

How editorial was Pippin in his depictions of black and brown citizens in America? What is he saying with such landscapes of the rural south, with the vestiges of enslavement cast over images of a farm woman next to a modest log cabin, a child a formless figure in the yard, in front of a livid background of cotton fields, viewed by some as a sentimental journey of a politically benign pastoral scene? Others see something much more revealing about those surviving in a brutally racist country.

Monahan tackles all of the socio-political implications, making deft points from several perspectives. Sometimes, though, the attempts to nail some of the implications to the wall of understanding every angle end up in circular arguments.

Monahan gives the artist himself the final word by republishing Pippin’s own biography of his life and how he created art. His text appears in the book’s appendix. Pippin explains, “The pictures that I have already painted comes to me in my mind. And to me if it is a worthwhile picture. I paint it. I go over that picture in my mind several times and when I am ready to paint it I have all the details that I need.”

This title is invaluable research art book for historians and anyone interested in American art. Monahan reframes a lot of the dialogue with substantive analyses and research. But readers not used to detailed art analysis have to hang in to get to Monahan’s more condensed objective text and conclusions. It is well worth it. Pippin’s artwork captivates and inspires.