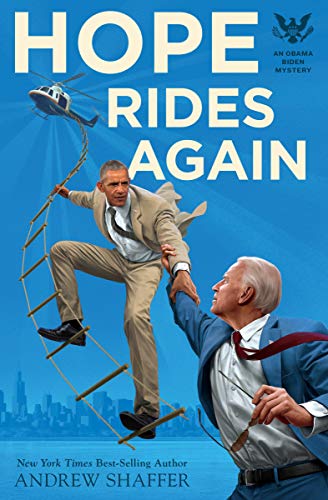 “another fanciful bit of fiction about two famous people, their camaraderie, and the way we’d like to imagine they’d face danger if it became personal.”

The political dynamic duo is back again, with long-suffering FBI agent Steve bring up the rear.

It’s St. Patrick’s Day in Chicago. Joe Biden, trying to ignore the notoriety of Murder on the Amtrak Express, written by “some two-bit hack” about his previous adventure with former president Obama, is on his way to the Rising Hope Center’s First Annual Global Economics Forum. Barack Obama is a guest at the event, and Joe’s been invited to hear Caruso, rapper-turned-activist, deliver the opening address.

“His hair was long and braided, a faded skull-and-crossbones tattoo peeked out his collar. He was tall as a cornstalk and spoke with a drawl turning his words into poetry. I caught myself nodding. The kids outside with signs weren’t protesters. They were fans of the charismatic man onstage.”

While there, Joe is introduced to Shaun Denton, a youngster who tells him how Rising Hope Center turned his life around. Shaun immediately finds a place in Joe’s heart.

“Kid like that, I just wanted to take him home with me, let him spend some time with the Bidens, see what a real family was like.”

Later, the former president’s phone goes missing, and it’s determined Shaun stole it. When the two track down the boy to retrieve the phone, they discover Shaun has been shot, and the phone is still missing.

Police think it’s a gang shooting but Joe, having talked to Shaun, isn’t so sure.

“You can’t tell by looking at someone if they’re in a gang, Joe. Forget whatever you’ve seen on Law and Order.”

“We’re the only ones who can do anything. You’ve got the connections. I’ve got the—”

With bodyguard Steve in tow, Obama and Biden will give Chicago a once-over it’s never before experienced. In the throes of the celebration of St. Patrick’s day, that “toddlin’ town” is about to get a going-over by the former president and former VP that will uncover a conspiracy reaching from the mayor’s office to a crusading pastor’s pulpit, throwing in a motor boat race across Lake Michigan and a helicopter rescue to add a little excitement.

Start out looking for a missing cell phone; end up being rescued from Lake Michigan by climbing a ladder into a hovering helicopter—all in a day’s work.

Whoever said the life of a retired politician isn’t exciting?

Undoubtedly cynics will dismiss this novel as a bit of pre-campaign propaganda while those who like a good story will hope it isn’t and keep on reading. The coming election of 2020 is mentioned, several times in fact. Other than that, this is simply another fanciful bit of fiction about two famous people, their camaraderie, and the way we’d like to imagine they’d face danger if it became personal.

Though perhaps a little less action-filled than the initial entry in this series—after all, what could top a fistfight on a moving elevated Amtrack?—the story is filled with more of those pithy one-liners filling the first—“We got along like two sticks being used to start a fire;” “He was a little rough around the edges, like a serrated knife,” and the exchanges between the two main characters, as well as the brief cameos with their spouses, continue in the same vein as previously.

Sit back, relax, read, and enjoy.