Honor Before Glory: The Epic World War II Story of the Japanese American GIs Who Rescued the Lost Battalion 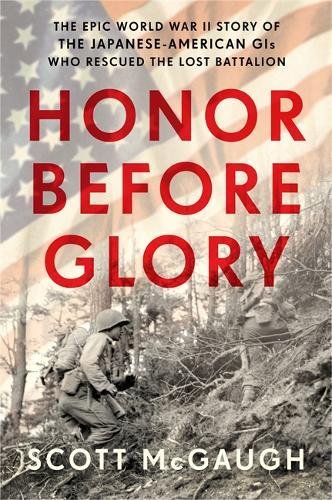 Those with an interest in military history, in particular World War II, should be familiar with the efforts of the 442nd Regimental Combat Team (RCT), a formation of Japanese-American citizens who volunteered to fight for their country. With the motto “Go for Broke,” it is characterized as the most decorated American military unit of the war.

Its members had every reason to prove and redeem themselves and their families, and that forms a large part of this book, over and above the “rescue” mentioned. Following the attack on Pearl Harbor and resultant backlash, President Roosevelt’s notorious Executive Order 9066 mandated the relocation of these Japanese-American citizens from the West Coast to internment camps in inland western states such as Idaho, Utah, and Arizona.

Essentially deprived of due process, homes, businesses, and belongings, these first (Issei) and second (Nissei) generation Japanese-Americans were kept behind barbed wire in substandard housing until their usefulness, and eventual manpower necessities, to the United States military became apparent. They were allowed to enlist in the American armed forces and many did as much to escape the camps as to demonstrate their loyalty to their adopted country.

In the event, some were sent to the Pacific to serve against their own, as it were, as translators, interpreters, and interrogators, yet not in combat due to the horrors that would be inflicted on them if captured by the Japanese in American uniform and an implicit distrust of them and said loyalty.

Those who went to the European Theater were designated the 442nd Regimental Combat Team, attached to the 36th Infantry Division. Fighting first in the Italian Campaign, the formation was later withdrawn and participated in the invasion of southern France in August, 1944, ultimately leading to the circumstances described: a week’s fighting in the Vosges Mountains to relieve another battalion of its own division which had been surrounded by the Germans.

As a result, the Nissei found themselves combatting a whole host of problems: fighting in autumn’s cold, the rainy weather, the terrain, physical and mental exhaustion, insufficient supplies of virtually everything, the Germans and, perhaps most telling, issues with their own chain of command.

By far, the biggest problems were the terrain, the Germans, and leadership at the highest levels. The forested, mountainous venue largely mandated advances along paths and the few logging roads in the forest, which also tended to inhibit resupply attempts from the air of those surrounded. Not surprisingly, many of the supplies fell into German hands.

Furthermore, it was a defense’s dream come true, notwithstanding the relatively low quality enemy troops opposing them. The Germans had artillery, mortars, and properly positioned and camouflaged machine guns as well as small arms to magnify the Americans’ troubles with the terrain.

Worst of all, the 36th Division was commanded by someone who had had more desk experience than front-line combat experience, which resulted in the battalion in question being surrounded in the first place and also, consequently, the need to relieve it in order to preclude the possibility and resultant embarrassment of its destruction or capture.

When efforts fell short of what was expected by higher command, some mid-level officers were relieved with the commanding general sometimes taking over local tactical control and displaying a lack of innovative tactics. This resulted in many frontal assaults against German positions and ordering the weakened battalion to break out with insufficient manpower, ammunition, and proper intelligence on enemy resources—all while dealing with their wounded.

In the end, breakthrough and relief of those surrounded were achieved but at a very high cost. The Japanese-American troops once again demonstrated their valor and bravery, earning a large number of combat decorations.

Author McGaugh has listed a cast of characters referenced in the text as well as an organizational diagram of the 36th Infantry Division and the attached 442nd RCT. The two maps included are really all that are needed. They depict the Mediterranean fronts of the European Theater of Operations where the Nissei served and the Vosges Mountains area where the action of the book took place.

Although there are no endnotes, the author has employed a wide variety of interviews, oral histories, and memoirs of many of the participants in addition to other relevant official primary and secondary sources.

In spite of deprivation of civil rights by their own nation, these citizens of Japanese ancestry proved themselves in every way during the course of their service. Recognition of this fact came in 1988 with U.S. government acknowledgment and $1.6 billion in authorized reparations. We could do no less in an effort to mitigate this historical injustice.