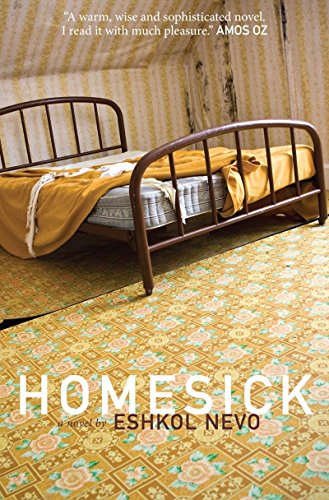 Homesick is a warm, embracing novel that captures how, lacking clear boundaries, Israeli neighbors observe one another’s private lives close up. The reader quickly becomes just such an observer and feels like a part of a close-knit, extended family whose members are not necessarily related. In this and other respects, Eshkol Nevo’s first novel reminds this reader of the novels of his literary fathers, Amos Oz and A. B. Yehoshua.

The novel’s narrative alternates between the voices of several characters who speak naturally (one of whom writes letters from overseas) and an omniscient narrator who speaks in rhyming prose—a middle-eastern literary form known in Arabic and Hebrew as maqama—all conveyed skillfully by the translator, Sondra Silverston. In less skillful hands maqama rhymes can become as predictable and forgettable as mediocre rap lyrics, but Silverston does not follow the form slavishly and will forgo a rhyme rather than fall into that trap. In one place, for example, where the obvious rhyme to a preceding sentence ending in “had” would be “dad” she instead uses “father.” American readers will have no difficulty with her British English as long as they know that draughts is the British word for the game we Americans know as checkers, and aubergine is the vegetable we know as eggplant.

The book is divided into five sections separated by song lyrics by a fictional Israeli rock band; each of the five sections is further divided into one- to three-page sub-chapters separated by asterisks (which makes for good subway or suburban commuter rail reading, though this reader found it difficult to put down despite the asterisks), and it can take half a paragraph into each sub-chapter before the reader identifies the speaker from context, or in the case of the maqama, sub-chapters from the rhymes. Some readers might find this initially off-putting, but this reviewer urges them to persevere while the book picks up its rhythm.

The central characters are an unmarried undergraduate couple in their early to mid-twenties (Israelis don’t begin their university educations until they complete their army service), who decide to live together in 1995, shortly before the Rabin assassination.

Amir, the author’s alter ego, is a psychology major studying at Tel Aviv University. Noa is a photography major studying at the Bezalel Art College in Jerusalem. They agree to find a place half way between the two cities, but Noa steers them to Maoz Ziyon, a working class suburb just west of Jerusalem and just south of the Tel-Aviv-Jerusalem highway, across the highway from the upper-middle class suburb Mivaseret Ziyon. Before 1948 Maoz Ziyon was El-Castel, an Arab village whose inhabitants fled the IDF and in subsequent years were replaced by Jewish immigrants from Kurdistan.

Amir and Noa rent a tiny apartment from the couple next door, Moshe and Sima Zakian. The apartment has a kitchen the size of a small bathroom, a living room the size of a small kitchen, a bedroom the size of a walk-in closet, and a hot water heater located in Moshe and Sima’s apartment next door which Amir and Noa turn on by uncovering a hole in the paper-thin wall that separates the apartments, reaching in, and flicking a switch. Sima uses the same hole in the wall to deliver her tenants’ mail, to invite Noa over for coffee, and to eavesdrop. When Amir and Noa at various points complain to each other that one doesn’t give the other enough mental and emotional space, it occurs to this reader that their domicile lacks sufficient physical space for two people.

The book’s Hebrew title literally means Four Houses and Longing, and each of its characters expresses his or her own longing. Amir and Noa each long for the other’s passionate, enthusiastic side that has dissipated since they moved in together and became domesticated.

Moshe, a bus driver, and Sima, a stay at home mom only a year older than her tenants, are parents to Liron, a five year-old boy, and Lilach, an infant girl. They live downstairs from Moshe’s parents, Avram and Gina. Sima rebelled against religious parents but nonetheless deferred college to marry Moshe and raise their children. Despite his wife’s secularism, Moshe is strongly influenced by his brother Menachem, an Orthodox rabbi. Sima longs for the higher education and cultural sophistication that eluded her and that her husband, who never completed his high school matriculation exams, lacks, especially compared to Amir. For his part Moshe longs for his brother’s approval and envies his religiosity.

When they first arrive in Maoz Ziyon, Amir and Noa mistake the home of Reuven and Nechama, whose house is across an empty lot from the Zakians, for their intended destination, and inadvertently pay a shiva call on the couple whose older son Gidi has just been killed as a soldier serving in Lebanon. The couple’s younger son Yotam later seeks out and befriends Amir. Yotam longs not only for his older brother, but also for his parents’ intimacy and emotional health before they were overcome by grief.

Down the street from the Zakians is a construction site where Saddiq, a Palestinian worker whom Nevo portrays sympathetically (the book has been translated into and published in Arabic), recognizes Avram and Gina’s house as the one he and his family fled from when he was an eight year-old, and becomes pre-occupied with his own longing for his lost childhood home. In a moment of delirium Avram mistakes Saddiq for Nissan, his and Gina’s oldest son who died at age two shortly after they moved in to the house, and is filled with longing for the child they lost.

And if all the above mentioned longing were not enough, Amir corresponds with a childhood friend and army buddy who is trekking across South and Central America and whose accounts of various adventures are tinged with homesickness. But despite all these longings, and the historical backdrop of Rabin’s assassination, and the subsequent suicide bombings, this book is not depressing. On the contrary its empathic tone has a sweetness that reminds this reader of some of the films of François Truffaut and of Mike Leigh’s film Life Is Sweet.

There are a couple of somewhat contrived plot devises that move the dramatic action forward, but by the time they appear Nevo has already won us over, and this reviewer was willing to give him the benefit of the doubt. If you enjoy Homesick as much as this reviewer did you’ll want to pass it on to someone you’re fond of as soon as you finish reading it.