The Homeplace: A Mystery 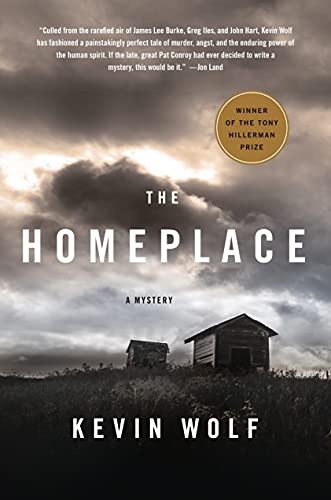 "What’s hard to believe is that The Homeplace is the work of a previously unpublished writer . . . "

The Homeplace won the Tony Hillerman Prize in the fall of 2015. The prize goes to an unpublished writer of a mystery that captures the southwest flavor of Hillerman’s work.

It’s easy to see why The Homeplace won. Set out on the plains of eastern Colorado, the landscape in The Homplace points more Midwest than Southwest, but no matter. Similar to Hillerman’s, the prose here is clear-eyed and non-flashy. The characters are vivid. And the mystery is a grabber, with an everyman undertow.

What’s hard to believe is that The Homeplace is the work of a previously unpublished writer; Kevin Wolf turns 65 in December. Let’s hope this first release leads to digging through any stories squirreled away in a desk drawer or gathering dust on a shelf.

The Homeplace revolves around Chase Ford. He’s coming home to Comanche County, where there’s “forty miles of dirt for every mile of blacktop.” He’s a former basketball star, and he’s also the first of four generations of Ford men to put Comanche County in the rearview mirror. At least, that is, until now.

Ford’s point of view drives the story, but Wolf gives us a complete small-town ensemble. There’s Birdie Hawkins, a game warden for the Department of Wildlife. There’s Mercy Saylor, who works in the café in Brandon; and deputy sheriff Paco Martinez. There’s also Ray-Ray Jackson, who lives on the edges of society. Ray-Ray likes fresh jalapeno with his deer heart when he’s eating off his illegal kills out in the brush.

The sky is big and the wind blows, but life in the small town has a trapped, closed-in feeling. Everybody knows a bit too much about each other. Each of the characters has issues, whether it’s bosses, mothers, or society in general. The Homeplace does not lend itself to neat character summaries. Complexities abound. And while Chase is the engine here, Birdie and Ray-Ray in particular make for a memorable supporting cast. Wolf layers all his characters; no single-notes allowed.

Wolf swoops smoothly from cool omniscience to close inside his character’s heads, as when Chase and Mercy reconnect in the café for the first time since he disappeared over the horizon. “Quiet slipped into the room and took the empty chair at their table. Pans and pots clanged in the kitchen. Dishes loaded with eggs and bacon slid over the front counter, and the cash register drawer opened and shut. They both stared out the window, content in that minute to say nothing.”

On the day Chase returns, Jimmy Riley’s body is found near four dead buffalo. Jimmy is stark naked, and there’s a bullet hole in his head. Jimmy reminds Chase of himself at that same age—including the fact that Jimmy had been seeing Chase’s half-sister, a young woman he never knew.

Chase has his ghosts and troubles he’s dragging with him. There are harsh memories from his youth. One of the worst involves his father. There are things he could have done differently to help. But he left. And became a big star. Everyone in America knows Chase’s name due to one dramatic moment on the basketball court, when Chase played for the Lakers. But not everything was or is what it seems. Everywhere he looks around him; and at the reflection of his own decisions and mistakes along the way, Chase sees many instances when reputation doesn’t match cold reality—especially his own.

The Homeplace is billed as a mystery—dead body in the first few pages, etcetera. Who done it? But with its weight and dry-eyed character studies, The Homeplace could easily be read as straight novel. As Chase pursues the truth—and he’s not alone—he’s tempted one more time to follow old patterns and familiar  temptations. He longs for the “simple times of long before” but realizes, this time, that he has to do what’s right.

“I try to make my books reflect humanity as I see it,” said Tony Hillerman of his writing. And that might be the most Hillerman-like quality of The Homeplace: its utter and convincing sense of humanity.