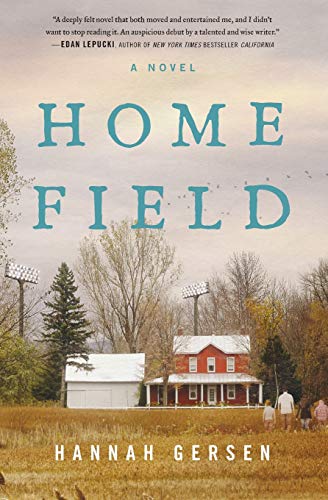 In many ways, the debut novel Home Field resembles the high-school football games at the center of the story: Sometimes white-knuckle dramatic, sometimes too slow, an explosion of smells and sights and sounds, and definitely worth staying until the end.

Perhaps the book’s greatest charm lies in its depiction of a fictitious small town in western Maryland called Willowboro during the era just before cell phones and Internet downloads, when a college student had to use library computers to check email. Four businesses “were the cornerstones of Willowboro’s social life: Asaro’s Pizza, Mike’s Video Time, Jenny’s Luncheonette, and the post office,” and the whole town turns out for the high school football booster party.

The novel certainly starts dramatically as Dean Renner—head coach of that beloved football team—and his 18-year-old stepdaughter, Stephanie, literally gallop to Dean’s father’s farmhouse to find that Dean’s wife Nicole, Stephanie’s mother, has hanged herself in the barn nearby.

From there, Home Field traces the tangled impact of Nicole’s death on Dean, Stephanie, and Dean and Nicole’s two sons, eleven-year-old Robbie and eight-year-old Bryan.

Stephanie, heading off to college at Swarthmore, abruptly pushes away Dean, who she has always considered her father because her birth father died when she was a preschooler. At Swarthmore, she tumbles into a morass of drinking, drugs, and cutting classes.

Robbie, too, cuts classes. Only his role in the high school play gives him a sense of belonging anywhere.

Bryan, always the peacemaker, succumbs to his churchgoing aunt’s pressure to “take Jesus into his heart.”

Dean, wracked by guilt over Nicole’s death and confusion over the children’s reactions, gives up coaching the football team in order to have more time with his sons. But he promptly switches his obsessiveness into coaching the girls’ cross-country team. He further yo-yos his emotions in an on-again, off-again romance with a middle school counselor, Laura Lanning, even though she is engaged to someone else.

Unfortunately, author Hannah Gersen may be as obsessed with sports as Dean is. She recounts in eye-glazing detail seemingly every training regimen and every minute in every football game and cross-country race.

Countering those playbook passages, the description of Dean’s love for sports and for the athletes he coaches is powerful and genuine. “There was nothing he loved more than a hot summer day at the beginning of a new season, the way it stood in contrast to the nights to come; when the black sky would be kept at bay by bright lights, when the field would smell like kicked-up dirt and mud, when it would rain, or the wind would blow cold, and the game would go on anyway; when the crowds behind him would holler and cheer and tamp their feet onto the bleachers.”

But even the most beautiful writing can drag a book down if there’s too much of it. And Gersen tends to pad her 432-page novel with unnecessary descriptions of dozens of walk-on characters—sparkling as those descriptions may be. An emergency room doctor is “young, with a goatee and a sort of unformed look about his mouth” and breath that smells of coffee and licorice gum. A boy at the homecoming dance “looked like a used-car salesman in his shiny suit and conservative tie.”

Luckily, Gersen’s language is on-target where it matters: in the characters’ relationships.

Stephanie remembers “a cold winter morning when she came down to breakfast to find her mother standing stock-still at the kitchen counter, staring at a lemon on the cutting board.” Nicole asks Stephanie to cut the lemon, because “it was somehow too difficult to find the right knife and to hold the lemon still and to wield the knife precisely enough to slice it into pieces.”

That stark scene, by itself, almost explains Nicole’s suicide, if anything can.