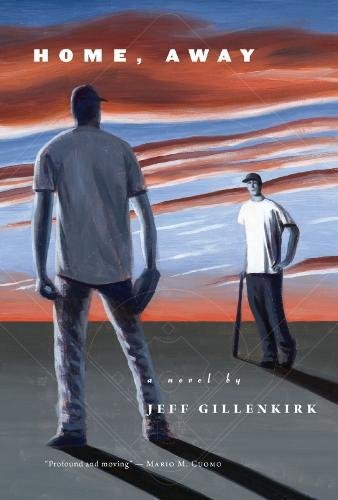 In this innovative novel, the author makes all too clear the impossibility of a divorced father’s leading a normal life while playing professional baseball. Home games aren’t so bad, but Away games make hash of anybody’s schedule. And what if you get traded?

Author and journalist Jeff Gillenkirk turns this situation into a touching and even gripping tale of a ball player named Jason Thibodeaux who means well, even twice giving up his career to take care of his son, but who often makes serious mistakes, particularly because he wants desperately for his boy to become a ballplayer. He forgets, for example, that passing the national game to the next generation has to be the product of desire on the part of both teacher and learner.

Readers of Home, Away, whether they have children or not, will immediately sympathize with Jason in his attempts to understand and guide his son Rafe, especially since the boy, looking for love and approval, gets into serious trouble when he enters his confusing teen years.

The author describes baseball from a professional’s view as “a wholly self-contained and self-referential world.” The charm of such a world, the way Gillenkirk shows it, matches the way devoted fans view it. But he might have added that this kind of world isn’t conducive to a stable family life, particularly if the professional player, although divorced, desires fervently to help raise his son.

Not only does Gillenkirk excel in showing us the intensity and heartbreak of the father-son relationship when work and life conflict, he also pictures the world of baseball with authenticity. In his portrayal of the professional game he includes convincing descriptions of relationships with other players as well as managers, coaches, and baseball annies, women who follow team members around the circuit and often become personally involved with them. Gillenkirk pictures life in the minors and the majors as well as historians have. The author’s online profile reveals no experience as a pro player, but his uncanny descriptions of living with, and loving, the national game make this reviewer think he’s harboring some high-level baseball somewhere in his background.

Gillenkirk possesses solid skill as a novelist. The flow of the narrative draws the reader in partly by means of short transition pieces in the voice of a USA Today reporter, whose commentary serves as a sort of Greek chorus. Most of his descriptions of places ring true. He characterizes Mexico aptly as “a country running on humor, instinct and a kind of valiant dignity.” He also comes up with some neat metaphors and similes; for example, batters have “the divine right of swings.”

Not all events that occur in this story will convince readers. Would the average player who produced an unplanned child before marrying the mother say later, “Why bother having kids if you aren’t going to be there [for them]?” Jason didn’t “bother having a child;” he created it unawares, without any bother. And would a pro athlete really give up a forty-two million dollar contract to supervise his wayward teenager? Moreover, Gillenkirk depicts Jason’s divorced wife Vicki as almost impossibly cruel in her determination to keep their son completely to herself.

The only lapse in background description occurs when Jason’s son Rafe and Jason’s ex-wife Vicki (who has reformed) locate him in Cleveland, just three blocks from Jacobs Field, supposedly living in a two-story house complete with porch and grassy yard. Actually, Jacobs Field, known as “The Jake” until January of 2008, when it was renamed Progressive Field, stands in downtown Cleveland surrounded by commercial buildings, including Cleveland’s tall landmark, Terminal Tower. Three blocks from Progressive Field is Cleveland’s main street, Euclid Avenue. There isn’t a private home surrounded by a grassy yard within several miles.

But this and other minor slips fail to detract from the power of this novel to make us consider the theme as a social problem. Personalizing the problem through fiction only makes it more heartfelt. We have all read about women who find themselves torn between their desire to raise their children personally and their determination to pursue a demanding career. Now we are asked to consider the problems of a divorced father who wants to help raise his son while engaging in professional baseball, with its unavoidable absences (Home, Away) and its uncertainty about the length of his tenure with a particular team. No wonder the sports pages, like the other parts of the newspaper, are studded with dismaying stories of separation, adultery, addiction, and violence.

The author presents no complete answer to the problem he presents. Things work out with a certain degree of satisfaction only when everyone makes some compromises and cooperates to help the others. But isn’t that always the solution?