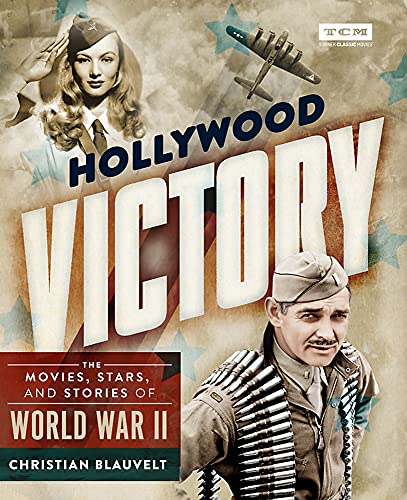 “World War II was a unique experience for Hollywood.”

“When Hollywood Went to War” is a familiar refrain of the support that the entire motion picture industry gave to the American war effort in World War II. But the story of exactly how the movie industry mobilized its influential power has rarely been told. This delightfully illustrated new volume covers how the entire story of the powerhouses of Hollywood, from moguls to stars, supported America’s greatest conflict in a variety of ways.

Beginning in the early 1930s, the rise of fascism and the Nazi Party in Germany put Hollywood in a similar position to Hollywood and Communist China today.  They ignored the rising oppression of the Nazi regime in order to maintain access to the lucrative German movie market, even though many of the most powerful people in the industry were Jewish, particularly Louis B. Mayer, arguably the most powerful man in town. Up until about 1938, Mayer and almost all the other studio heads altered some of their movies to ensure they didn’t offend the Nazis, similar to how Hollywood today is very careful to not offend the huge Chinese market.

All of this changed as the tyranny of the Nazi regime could no longer be ignored, and with the outbreak of war in September 1939, some of the greatest political movies of the era, particularly Charlie Chaplin’s magnum opus The Great Dictator, were made to both mock and raise awareness of the rising threat, especially after the Germans overran Western Europe in the spring of 1940. While a strong undercurrent of isolationism ran though Hollywood as it did all of America prior to Pearl Harbor, the movie industry began to stir in its support of the defense of America, making more patriotic movies, and beginning to ponder how to raise awareness of America’s need for defense preparedness.

Everything changed in Hollywood on December 7, 1941. Now firmly committed to serving the war effort, both the movie studios and individual stars made numerous contributions to the war, ranging from selling war bonds to opening the Hollywood canteen where service members could mingle with their favorite movie stars. And of course, the creation of the United Services Organization, known popularly as the USO, sent entertainers around the world to put on shows for the troops in every theater of the war, the most famous becoming the indomitable Bob Hope, who continued to provide shows to US troops for the next 50 years in Korea, Vietnam, and Desert Storm. These efforts were not without risk, and the loss of Carol Lombard, wife of Clark Gable, in a plane crash while on a war bonds drive hit Hollywood hard.

Notably, the author also looks at the forgotten players in Hollywood as well, particularly the German exiles, many of them Jewish and anti-Nazi who played German villains in films during the war and Chinese and Korean Americans who played Japanese villains, showing the irony of their situation playing characters of the enemy for American audiences.

In addition, the author also explores the many contributions of African American actors to the war effort through war bond drives and mobilizing minorities for both defense industry jobs and joining a still segregated military for a chance to serve, particularly Hattie McDaniel, the recent Academy Award winner from Gone with the Wind. The culmination of this enrollment of minorities was the “Good Neighbor” outreach by Hollywood stars like Carmen Miranda and the ultimate ambassador, Walt Disney and his famous cartoon characters, to Latin and South American countries as part of an effort to keep them from joining the Axis powers.

The ultimate service was by those Hollywood stars that put on a uniform. Although many of them served behind the lines, either making training films or serving a variety of staff roles, some of them served in combat, most notably Jimmy Stewart, one of the leading men of Hollywood, who joined the Army Air Force and flew over 20 bomber missions over Europe, rising to the rank of Colonel.

World War II was a unique experience for Hollywood. Never again would the entire entertainment industry be so firmly involved in a national crisis or so united in supporting the military. This is truly a book for the ages, chronicling a time when the “Good War” united all Americans with a singular purpose.