The Hollywood Sign: Fantasy and Reality of an American Icon (Icons of America) 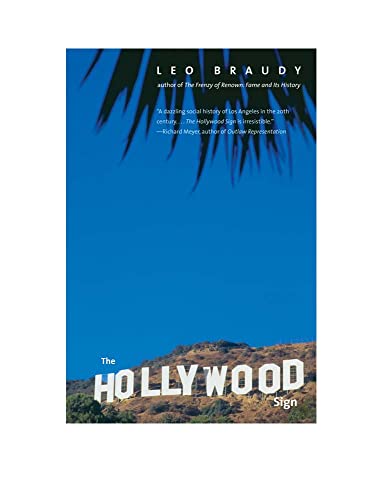 “. . . an informative, entertaining chronicle not only about Hollywood and its famous sign but also about what makes a place.”

Places enjoy a certain celebrity that, combined with other attributes, contributes to a particular place’s place brand.

Because a brand is a promise—an expectation, a preview of quality to come—the place brand represents the essence, the intangible articulation of the place: its character, culture, values, style, features, resources, and more.

In The Hollywood Sign, Leo Braudy tells the story of the making of Hollywood, its drama and intrigues, and the singularly important role of the Hollywood sign.

Initially erected as a temporary promotion for a real estate subdivision, the Hollywood sign was reconstructed many times as it evolved to be the iconic symbol of Hollywood. This book is a contextual meditation on the evolution of the idea, the ambiance, the image that characterizes the brand of the place known as Hollywood.

Like a blank stage set, the Hollywood sign is open to interpretation by the viewer, whose aspirations and worries, circumstances and schemes, knowledge and outlook inevitably frame and inform the interpretation of what is seen and perceived.

Notably, Hollywood itself is an “an abstraction, a metonym that seemed to refer to everything about the movies except for the town that supposedly gave them birth.”

Great places have great physical attributes that both reflect and inform the place’s place brand and also provide access to realizing the promise of the place brand. But not Hollywood.

If you encounter that place, located between downtown Los Angles and the Pacific Ocean, you are likely to have a place experience mirroring Gertrude Stein’s infamous putdown of Oakland, located across the Bay, east of San Francisco: “there is no there there.” The “there” in Hollywood is not a collection of urban features and resources conducive to rewarding place experiences but a sign announcing and identifying the place.

Just as the Hollywood movie is the product of and the means to transport the imagination, so, too, is the substance behind the Hollywood place brand more imaginary than real, more ephemeral than tangible, more conceptual than substantive.

Several different versions of Hollywood have emerged. There was “a specific place with geographic boundaries, constantly changing and contested. Then there was Hollywood as a generally accepted name for the homeland of the American movie industry, like Fleet Street in London for newspapers or Wall Street in New York for finance, a shorthand for the stares and the films. Then allied to that sense of physical place was yet another Hollywood, a more or less intangible place on earth or the atmosphere above it, to which aspirants to fame could come and be recognized.”

Certain memorable three-dimensional icons may symbolize a place and its place brand: Big Ben in London, the Eiffel Tower in Paris, and until destroyed by the 9/11 terrorist attacks, the World Trade Center Twin Towers in New York City.

Hollywood, likewise, has such an icon—the Hollywood sign—that is arguably disproportionately important to Hollywood given its lack of a central place. At the same time, while the three dimensional place icons of other high profile places can be seen up close, touched, and experienced, the Hollywood sign is something that is seen but not, for the most part, touched, for it is located in the natural, brush-laden—and largely inaccessible except to the most intrepid hikers—hills above Hollywood.

Tourists and others arriving in Hollywood have no real destination that is part of the place itself, integral to the essence of this place, utilized and experienced by the residents of the place, and accessible to visitors.

Visitors to Hollywood can get a “staged theme park experience” by visiting Universal Studios. Or they might take a double-decker tour of stars’ homes, but from a distance: driving the streets and attempting to look in from the outside, rather than getting up close and personal with the Hollywood stars and the people who make the movies.

The Hollywood sign is about image and fantasy, a projection dominating the mundane of real life. Not inappropriately, the original purpose of the Hollywood sign was to promote a real estate development. Inasmuch as real estate marketing traffics in fantasy and projection, as does film, and the entrepreneurial process of implementing a real estate development project and making a film have much in common, it is not so surprising that the marketing symbol intended to promote the former was co-opted to serve the promotional purposes of the latter:

“The symbiosis of real estate, advertising and the sense of a special place” was especially pronounced in Southern California, where “Advertising was the intermediary between the raw land and the more abstract idea of what would happen to the buyer after he or she was settled. Here especially the vision of a better self could be anchored in the land.”

Writing of the distinctive place attributes of Hollywood, Mr. Braudy observes, “Unlike Paris, London, or Berlin, Hollywood and the West were not part of a mature urban setting with a long cultural history. Instead, like American character itself, it was a raw world, filled with open space in which to build. By contrast with the storied cities of the East and Europe, Los Angeles and Hollywood there to be created from the ground up, shaped and manipulated, until they became every moviegoer’s other world—cities of the imagination. As the embryonic star system began to identify the previously anonymous faces on the screen, ‘Hollywood’ became a catchall term for the mythic space where they could all be found.”

Given the proliferation of “runaway” films—so labeled to reflect movies made in places offering more seductive and enticing incentives—the symbolic significance of the Hollywood sign becomes ever greater over time.

In this regard, the author concludes: “The Hollywood sign, and all it signifies, remains approachable but almost impossible to attain . . . its physical presence continues to be an imperfect version of its larger meaning, always aspiring, never quite there.”

The Hollywood Sign is an informative, entertaining chronicle not only about Hollywood and its famous sign but also about what makes a place. Just like many popular Hollywood films, this book is great edutainment.