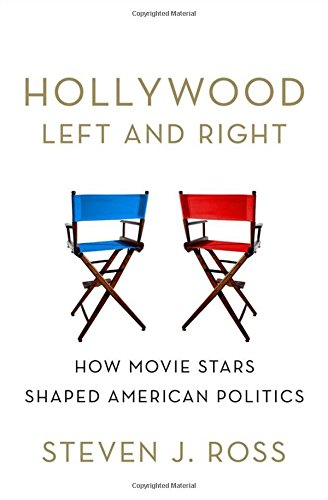 “Hollywood Left and Right is nonfiction at its best: entertaining and engaging, probing and provocative, detailed and comprehensive in coverage, multifaceted and far-ranging in its treatment, objective and balanced, appropriately paced in covering a complex, big story.”

While many have labeled the current era the “information age,” replacing the tangible and hard goods dominance during the earlier “modern capitalism” and “industrial revolution,” some would alternately assert that entertainment dominates the society and economy of the 21st century—and neither party would be incorrect.

Setting aside the role of social media, film is arguably the most influential, lucrative, and glamorous entertainment form. Film producers, directors, and the celebrities who star in films are the most powerful of all entertainers—except perhaps those who dominate the music scene. Today, films, movie stars, entertainment culture, marketing, power, and politics are not distinct but integrated, morphing together in a mashup mélange in which the most powerful of Hollywood entertainers create extraordinary economic value and exert phenomenal influence.

The film industry migrated from New York in the second decade of the 20th century to Los Angeles, more specifically Hollywood. While in 1910 Hollywood had no movie presence, by 1919 its 70 studios accounted for 80% of the world’s movie production, and by 1921 represented some $1 billion dollars of capital investment. By 1937 Lewis B. Mayer was the country’s highest compensated executive. In the 1930s, Hollywood movie executives earned 19 of the 25 highest salaries in America.

The political power of movie stars has contributed to California’s national influence and to the prosperity of Los Angeles, the larger metro area of which Hollywood is a part. Hollywood celebrities have been elected to the U.S. Senate: George Murphy; Governor of California the country’s most populous state, Arnold Schwarzenegger, and President of the United States Ronald Reagan. Contrary to popular perception that Hollywood is dominated by the left, the very success of these three individuals in ascending to the highest elective offices reflects a central key argument advanced by Steven J. Ross—that movie stars are highly influential in both liberal and conservative political agendas—has highly entertaining, authoritative, seminally important study of Hollywood politics: Hollywood Left and Right: How Movie Stars Shaped American Politics.

Why has Hollywood assumed such a powerful role in society—not just in the country’s culture but its politics? Ultimately, movie stars shape our values and the very essence of what it means to be an American. Hollywood controls, innovates, and excels in the application of the media, which over time has become ever more critical to the marketing process.

The merging of marketing and entertainment was recognized a half century ago, when Marlon Brando observed, “If an actor can be influential selling deodorants he can be just as useful selling ideas.” Marty Kaplin, the Deputy Campaign Manager for Walter Mondale’s 1984 Presidential campaign, said, “A Presidential campaign is 90% marketing.” Applying the AIDA marketing acronym—attention, interest, desire, action—Hollywood excels in capturing attention, creating interest, developing desire, and stimulating action. Hollywood movie stars are highly influential, not only as celebrities role models, but in connecting with audiences at “an emotional level and with a sense of intimacy they rarely feel about politicians,” Mr. Ross writes.

The author asserts, “Movie stars do more than just show us how to dress, look or love, they teach us how to think and act politically.” Warren Beatty recognized the powerful role of entertainment, observing, “In movies you can get people to listen to what you have to say in the way that politics—the art of the possible—doesn’t always achieve.”

Politicians are attracted to Hollywood celebrity not just because they are star struck like many audience members, but because they recognize that celebrity association could enhance their appeal amongst voters. Especially important is that Hollywood movie stars control and also influence substantial money, which politicians need for their campaigns.

In Hollywood Left and Right Steven Ross profiles ten extraordinary entertainers who artfully deployed their Hollywood celebrity to advance political agendas. The movie stars featured and the political causes they promote(d) are:

3. Edward G. Robinson: Progressive social policy and opposition to rise of Adolf Hitler and the influence of the Nazis;

Steven Ross summarizes the essence of the political argument of the left as being “hope and guilt,” and of the right as “fear and reassurance.”

Ultimately, the Hollywood celebrities drawn to liberal politics focus on big issues and reform. That said, “the left has always had to pursue a harder path, for its struggles to initiate reform while the right fights to maintain the status quo,” the author notes. Those Hollywood celebrities committed to a conservative political agenda were generally more drawn to the power of high office: initially, as influential funders and advisors and, more recently, as elected public officials, to champion their vision for preserving, or, increasingly, recreating a desired status quo.

The author insightfully observes that save for Arnold Schwarzenegger—whose election as Governor of California was part of a career path, acting only a means to an end—the two primary entertainers who sought public office, George Murphy and Ronald Reagan, had much less successful careers in movies than did the stars who focused their energies on issue-oriented politics, because they “did not want to give up their fame, wealth and adulteration for the contentious electoral arena.”

Arnold Schwarzenegger pursued four fascinating and ultimately successful marketing campaigns: first of his personal career aspirations to be a world champion body builder, then as a successful entrepreneur, next a movie star, and, ultimately, a politician. In deliberating about running for California Governor he concluded that the Republican Party’s “problems were rooted in its inability to create a compelling storyline. Marketing a candidate, he insisted, was similar to marketing a movie—both needed a compelling concept to succeed,” Mr. Ross writes.

Accordingly to Steven Ross, Arnold Schwarzenegger “approached his gubernatorial bid as he would a major movie opening, that meant playing to those who knew him best and were most likely to be favorable to his candidacy: the entertainment media. His strength lay in milking the same media outlets he had relied on to market his films—appearances on ‘Oprah,’ ‘Howard Stern,’ ‘Larry King,’ ‘Jay Leno’—as well as conversations with reporters from Variety, ‘Access Hollywood,’ ‘Inside Edition’ and ‘E!’ Other candidates may have wanted similar exposure, but only someone with Arnold’s celebrity could get on TV shows for often and as long as he wanted.”

Significantly, Arnold bypassed and even ignored the traditional Main Street media. Recognizing the shifting structure of marketing messages, Arnold sought opportunities to gain access to voters in ways that other politicians could not feasibly achieve, emphasizing entertainment talk shows.

As Oprah Winfrey—on whose show Arnold had a most effective visit highlighted by his wife Maria Shriver telling about how her husband brought her coffee and drove their kids to school—observed, “Over the years, I have not found that interviewing politicians about the issues worked for my viewing audiences. I try to bring issues that people understand through their hearts and their feelings so they can make decisions.”

Just as the shift in marketing media, from advertising in the mainstream print publications to talk shows and social networking, has transformed B-to-C marketing, so, too, have parallel media shifts transformed political P-to-C marketing. Arnold Schwarzenegger modeled this shift in his successful gubernatorial election in 2003. And, more recently, Barack Obama adapted new marketing methods to become elected President of the United States in 2008.

Hollywood Left and Right is a fascinating study of culture, politics, history, entrepreneuriialism, marketing, media, entertainment, and personal success, all told through the backstories, personal agendas, and strategies of leading Hollywood stars. The author conveys significant, important, larger themes through personal profiles of leading stars, alternating those on the left and those on the right.

Hollywood Left and Right is nonfiction at its best: entertaining and engaging, probing and provocative, detailed and comprehensive in coverage, multifaceted and far-ranging in its treatment, objective and balanced, appropriately paced in covering a complex, big story.