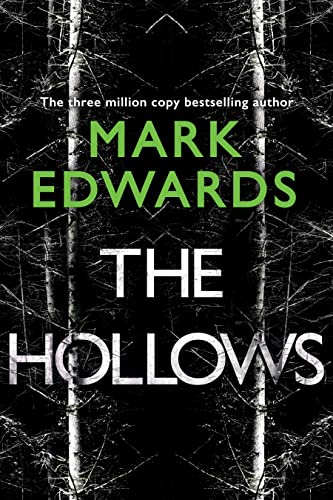 Since his divorce, Tom Anderson, a British music journalist, finds himself at odds. His ex has taken his daughter Frankie back to live in the States, and Tom misses her terribly. He arranges a quiet ten-day vacation with Frankie at Hollow Falls, a camp in the forests of northern Maine. Here, he plans to reconnect with the 14 year old and let her know how much he cares for her.

Frankie, your typical teenager, is upset when they arrive. She finds the area spooky and creepy, for she is not used to being isolated in the woods.

It is opening week, and Greg Quinn, the manager, checks them into their cottage while Vivian, his assistant, is stand-offish. Frankie immediately labels them as weird. When she learns there is no Wi-Fi out in the "middle of nowhere," she complains, but Tom is relieved, for he hopes to spend quality time with Frankie without her being glued to her cell phone.

They meet their next-door neighbors, David Butler, his wife Connie, and 15-year-old son, Ryan. David tells Tom they are there for a reason; this is more than a vacation.

Connie is a Podcaster dealing with true crime with quite a following. David mentions the deaths of two local schoolteachers that took place 20 years ago. They hope to gain more information about the alleged killer, a young man named Everett Miller, who bludgeoned the two teachers. Speculation is Everett disappeared—maybe to Canada—but it’s rumored he is still alive and roaming these deep woods.

One night, Tom swears he sees someone staring at him in the window. But this is not human; it has the features of a goat. Shaking his head, Tom starts to think the spookiness and the stories of the area are getting to him. He says nothing, not wanting to disclose what he saw, believing others will think he's nuts.

Frankie and Ryan become friends and hang out together. Before long, they begin to sense an eeriness surround them. When Frankie complains to Ryan about no cell service, he suggests they walk over to Penance, the next town.

"'They've got to have 4G there,' he said. 'Or we'll be able to find a Subway or a Dunkin' or something. Somewhere with Wi-Fi.'

"'It's just cruel,' Frankie had said, hoping Ryan could tell she was being ironic. 'Expecting us to exist without internet.'

"Despite what she'd said to her dad, she wasn't that bothered about the lack of a connection. It was nice to have a break from all the drama in the WhatsApp group she was in, and Sienna and Abby would be able to catch her up when she got home.

"The real reason she'd wanted to go on this little expedition was walking beside her. Fifteen years old, six feet tall, fit as hell. He looked just like Harry Styles. Actually, that would be one good reason to get back online. To share a picture of Ryan. Her friends would freak."

As they walked into Penance, they run into a couple of local teens bouncing a basketball. Ryan stops to ask if there is somewhere they can get onto Wi-Fi, but the kids stare at them, saying nothing. They leave, and the boy asks if they're staying at Hollow Falls. When Ryan says they are, he asks if they've seen any ghosts.

"The boy looked at her like she was a moron. 'I asked if you'd seen any ghosts.'

"His voice was odd. Like it hadn't broken properly yet. His eyes, though huge like an anime character's, were sleepy. Was he stoned? . . . .
. . . "'You're trespassing,' said the boy, staring right into Frankie's eyes.

"'It was so great to meet you guys,' said Ryan, after a stunned pause. 'Come on, Frankie.' And he walked away quickly. Frankie followed."

Ryan laughed as they got away from the kids, stating they are freaks though Frankie surmises Ryan is as flustered as she. They walk around spotting a few stores and take pictures on their phones. Noticing a signal of not password-protected Wi-Fi, Frankie is excited to use her phone. While she peruses her messages, Ryan posts photos on his Instagram site along with comments, but she doesn't think anything of it until he shows her what he wrote:

"Come to the asshole of the world! Penance, ME. Where the dogs in the junkyard have higher IQs than the people. #Penance #shithole #vacationfromhell."

Though shocked, Frankie doesn't say anything, not wanting Ryan to think she is a spoilsport. But she admitted, "This place was a shithole. A weird, creepy shithole." She thinks Ryan's comments are mean but believes he is upset by how the kids treated them, so she lets it go.

The days pass. She feels comfortable with Ryan yet spooked by the gossip going around about the history of the place. Then strange things begin to happen. The Penance kids seem to be on a path to revenge. Apparently, they don't like their town being denigrated, so they go after Frankie and Ryan. When Frankie discovers a gutted rabbit near the cabin, she knows it can only be those kids trying to scare them. And—their efforts are working, for even Tom is beginning to think they should leave.

Nikki, a local who owns the bookstore in Penance, confronts Tom, warning him to take Frankie and go, stating they are in danger. And when he encounters the juveniles throwing rocks at Ryan and Frankie, he insists they cut their vacation short. But their leaving doesn't happen soon enough before mayhem strikes.

Tom shares his point of view in specific chapters showing how he is handling his failed marriage, his down-the-tubes career, and how he tries to protect Frankie. His angst and horror are highly apparent as time passes and more incidents occur.

Meanwhile, Frankie hopes to come to grips with her relationship with her dad and also with Ryan. Never before knowing a boy before like him, she doesn't want to lose his friendship. They are both young, yet they show maturity in their situations while looking out for each other.

The Hollows is bursting with trepidation, and the descriptive location adds to the foreboding in this novel. It is reminiscent of that old saying, "Watch out for what goes bump in the night!" The power of this tale builds until the climactic ending, where one only wants to breathe a sigh of relief.