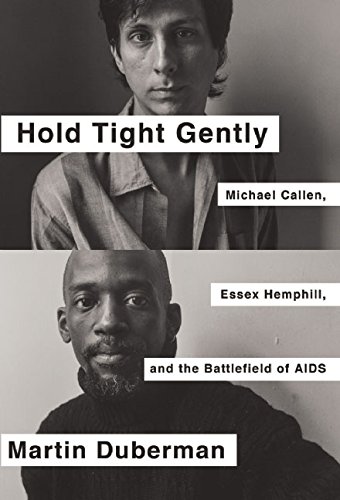 “Duberman’s objective analysis, as well as his activist voice, is incisive, passionate, and poetic.”

Singer Michael Callen died in 1993. He may be most remembered as a member of the a cappella group The Flirtations, but that not was what first put him in the national spotlight.

Poet Essex Hemphill died in 1995 and may be remembered from the infamous PBS broadcast of Marlon Riggs’ documentary Tongues Untied, but he was already a famous out poet-performer in his own right.  The achievements of these two artists turned AIDS activists, fighting on the front lines during the height of the epidemic, are chronicled in Martin Duberman’s moving dual biography Hold Tight Gently.

The title in fact comes from Hemphill’s groundbreaking book Brother to Brother, a collection of stories, essays, and poems by and for gay black men. Callen and Hemphill were fearless activists and were among the inestimable number of American gay male artists lost in the first 15 years of the AIDS epidemic.

Duberman not only has complete command of the social and political landscape of the AIDS era, he was intimately involved with advocacy himself and writes from the inside track of the heroic and sometimes desperate measures of gay organizations in fighting for medical and civil rights of people living with AIDS.

Time has not softened Duberman’s scalding assessment of the governmental indifference, medical politics, and prevailing homophobia that cost so many gay lives.

The author also doesn’t pull back from revisiting the often-counterproductive infighting of a community overwhelmed with loss and at war with the straight world. His perspective and analysis of this monumentally important movement of AIDS activism, is, from several angles, rescued history. Strategically, Duberman includes some of his own diaries entries the grimmest years of the epidemic.

Callen and Hemphill were artists at the height of their creative powers when they were diagnosed with HIV-AIDS. As different as they were in background, careers, families, and relationships, they were on some parallel tracks with a selfless and fierce commitment to AIDS activism, despite personal sacrifices.

Callen, a gay white man from the Midwest moved to New York to perform and after his diagnosis fought for AIDS patient advocacy. He was first diagnosed with AIDS in the early 80s and early on worked to get information about diagnosis, treatment, and prevention to the gay community in New York. He was a long-term AIDS survivor and fierce advocate for getting explicit information out about safe sex, working tirelessly for advocacy of people with AIDS being part of the medical and social response to the epidemic.

He appeared before congress to bring AIDS awareness and expose political hypocrisies and homophobia. Callen knew as much or more about the medical facts and theories of AIDS and worked with everyone from Dr. Mathilde Krim to gay citizens and all minorities dealing with AIDS.

Hemphill, a black gay man from Washington, DC, worked to bring together the disparate voices of black gay men, lesbian writers and artists in performance and print in DC, Philadelphia, and eventually on a national level, artists and activists reaching out for visibility, dialogue and inclusion, in what was to become dubbed the Second Harlem Renaissance. He fought for recognition of gay identity, challenging national African American civic and religious leaders to deal with acceptance of GLBTQ minorities within hetero-normative minority communities.

Both Callen and Hemphill retreated from activism and returned to the sanctuary of their creative lives as their health declined and creating some of their best work evocative of their artistic, political, and gay lives. Callen writing and recording songs that would result in his finest vocal collection of his material as a solo artist and his collaborations with the Flirtations. Duberman includes some of Hemphill’s most stirring poetry from his final book Vital Signs.

At the height of the AIDS epidemic, Duberman founded CUNY’s Center for Lesbian and Gay Studies to further LGBT scholarship and curriculum. This book stands among his finest achievements, as impressive, in different ways, as his masterful 2007 biography of American art and ballet curator Lincoln Kirstein.

Like it is in that work, Duberman’s objective analysis, as well as his activist voice, is incisive, passionate, and poetic.