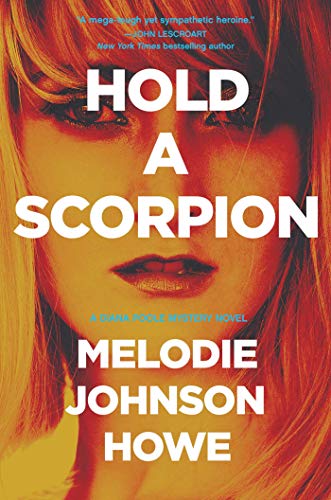 In the 1986 film The Morning After, Jane Fonda stars as Alex Sternbergen, a once-heralded movie star on a downward career slide. In the memorable opening scene she awakens next to a guy with a knife sticking out of his chest. Knowing that she’ll be pegged for the murder, Alex is forced to face her worst personal demons as she goes on the run to find the real killer before she’s arrested and charged with the crime.

The movie was a gripper that earned Fonda an Academy Award Nomination for Best Actress, and was adapted by Eileen Lottman into a compelling post-film novella. A big factor in its success was the blend of Alex’s candid Hollywood cynicism and her charming vulnerability as a product of it. She’s completely self-aware of how she’s faring in an industry that makes and breaks stars with heartbreaking speed and determined to forge a better life beyond the screen.

Memories of that film may come back to many readers of Melodie Johnson Howe’s Hold a Scorpion, the latest in a line of perfectly crafted thrillers featuring Diana Poole as a younger but similarly cynical—and charming—actress turned amateur sleuth. In this and previous stories in the series, Diana’s pulled into investigations because she’s personally threatened by the bad guys, but also determined by her own sense of right and wrong to get to the truth.

In this book, the personal connection comes in the form of a diamond-encrusted scorpion that sat at the bedside of Diana’s actress mother during the final days of her life. Within the story’s first pages Diana drives up to her Malibu home (after watching a matinee of one of her older films) and spots a woman staring at her from across the Pacific Coast Highway. The woman waves at Diana as a black limo pulls up, takes one look at the man who gets out of the limo, and boldly walks right into traffic.

The woman is killed instantly—and violently—as she’s struck by two vehicles going 55 mph. The next day, Diana is visited by a distraught, gun-wielding man who had been at the scene who asks her about the jeweled scorpion that he believes the dead woman was carrying. A day or so later Diana goes back to the accident scene and finds that scorpion amid debris at the side of the road.

These events put the mystery in motion as Diana strives to understand the significance of the scorpion, the reason the strange woman walked into traffic, and certain mysteries of her own mother’s death. It’s what happens in between these and subsequent scenes, however, that makes Diana Poole so compelling.

The day after the accident, for example, she reads for a romantic lead in a movie with a big star. Her reading is flawless (as noted by the director, who tells her “you’re better than your mother, Diana,”) but everyone in the room is attuned to a comment from the big star that belies his own insecurity. A comment that forecasts what will soon be Diana’s latest letdown.

Not that she didn’t see it coming. As Diana tells us, “We all fear oblivion, but Hollywood fears it more. In show business you can still be alive but not exist. You wake up one morning and your name is meaningless. Your face and your talent no longer command attention. You might as well be dead. But it’s worse because you’re not.”

Fortunately for readers, “oblivion” is something that will never happen to Melodie Johnson Howe. As a former actress who wanted far more to be a writer, she’s lived a life that provides the kind of the insider details that make Hollywood novels so irresistible. Those details first appeared on the page two decades ago through celebrated short stories and the novels Beauty Dies and The Mother Shadow, which was nominated for the Agatha and Edgar Awards.

That success will continue if Howe stays on track with the thrillers in this series. From her Shooting Hollywood short story collection, to the novel City of Mirrors, to Hold a Scorpion, all of the Diana Poole stories are driven by fabulously real characters and the same kind of self-awareness that made Fonda’s character so appealing in that movie 30 years ago. Collectively they likewise represent a fine Morning After a life in Hollywood, forecasting a wealth of great work to come.