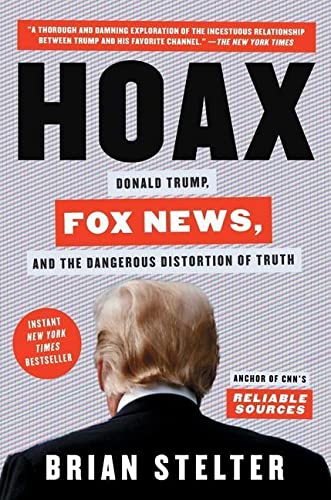 “Brian Stalter’s book explores the perfidious relationship between the president of the United States and Fox News, an affiliation that explains much about the catastrophe of Trump’s term in office.”

The 2020 presidential election has catalyzed an avalanche of books about President Donald J. Trump. Some contain genuine revelations, but all follow familiar paths in describing this dangerous, obtuse, bombastic, and boastful bully. No one will be able to argue that we did not know who this man really was. The literature is available and accessible. We have no one to blame but ourselves.

The cornerstone of American freedom is the First Amendment to the Constitution, in particular the freedom of the press. The media fosters the interchange of ideas, and the citizenry can then select what kind of nation they want America to be. When the Bill of Rights was adopted in 1791, partisan newspapers made up the press. That has always been the case throughout American history. Although journalists like to portray themselves as selfless patriots, in fact they are part of a commercialized business.

Although the technology has changed, the media today continues to be highly politicized. With the advent of cable news channels, in particular Fox News, the press has evolved into a powerful manipulator of governmental policy.

Brian Stelter is the chief media correspondent for CNN Worldwide. His new book, Hoax, about Fox News and its influence on Donald Trump’s administration tells the story of what is often referred to as “Trump TV.” Rupert Murdoch, the Australian magnate, hired Roger Ailes to set up an alternative media outlet that would pander exclusively to conservative views, rumors, and fabrications. It proved popular and lucrative. When failing New York real estate entrepreneur Donald Trump won the 2016 presidential election with the assistance of the Russian dictator Vladimir Putin, the synergism between Fox News and Trump solidified. Stelter describes this relationship through narratives and anecdotes.

The prima donnas on the Fox daily menu feed Trump’s childish need for attention while promoting their own ratings. The prime-time hosts avoid any pretense of objectivity, relying on alternative facts and bluster. Trump adherents among the public eat up the drivel.

It is hard to determine whether Trump runs Fox News or whether Fox News runs Trump. Almost exclusively, Trump only appears on Fox News, mostly through his phone calls. Trump spends a good portion of his day watching Fox News. Stelter shows how a comment made on Fox will find its way to revealed national policy within a few hours. When Trump likes the way someone performs on Fox, he hires them for his administration. Those who leave the administration find their way to Fox News.

It could be that Trump and Fox News simply hold the same views on immigration, political activism, racial discrimination, and partisan affairs. Viewers chose to watch channels with which they agree, and there is an enormous audience on Fox that produces ratings and sales of advertisements. Presidents have always sought advice from persons outside their administration, although Trump’s nightly phone calls to and from Sean Hannity suggest that the president has become obeisant to his pals at Fox News.

Brian Stalter’s book explores the perfidious relationship between the president of the United States and Fox News, an affiliation that explains much about the catastrophe of Trump’s term in office.