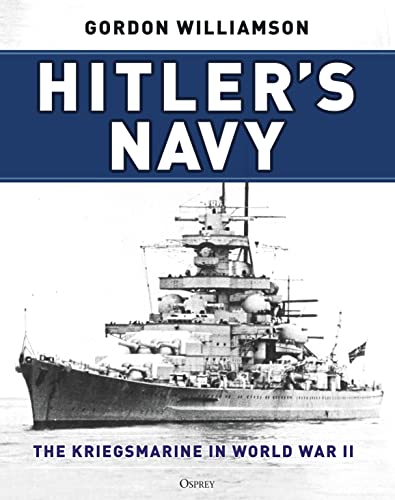 Continuing their series on the major navies of World War II, Osprey Publishing’s new volume provides a comprehensive reference for the German Kriegsmarine—the major operations, order of battle, warship and submarine specifications, and other details about the naval forces of the Third Reich.

The German Navy began the war woefully unprepared and understrength to face the major maritime forces of England and France. Although the Navy was highly professional with well-trained officers and sailors, the desired naval buildup of the Navy high command, particularly the construction of U-boats that would become the primary fighting arm, was far from complete in September 1939.

As the author notes, the German Navy played little role in Hitler’s war plans and had almost no impact on any major campaigns of the European theater except the Norwegian invasion in April 1940. Although the Navy played a key role in transporting the troops that would capture most of Norway’s primary ports and airfields, catching the Royal Navy strategically off guard and allowing significant reinforcements by air, the heavy losses from both Norwegian defenders and battles with the Royal Navy decimated the German surface fleet and ensured it would never attempt a major fleet operation for the remainder of the war.

Although the Germans fought several notable surface naval actions, including the sorties by the battleship Bismarck and the battle cruiser Scharnhorst to conduct commerce raiding, the overwhelming power of the Royal Navy, later supplemented by the US Navy ultimately devastated even the powerful U-boat arm to give the Allies undisputed mastery of the Atlantic Ocean and Mediterranean Sea. While the U-boats inflicted heavy losses on Allied merchant shipping, the industrial ability of American shipyards, combined with new tactics and weapons ensured the vital lifeline between the New World and the Old remained open for the war.

The author provides an amazing amount of detail on the entire German Navy order for battle, from the famous battleships and battle cruisers to the numerous classes of U-boats that introduced advanced technologies that would be tested and incorporated into many Allied navies after the war. The actions of German coastal craft such as torpedo, gun boats, and minesweepers are also covered, providing the student of naval history a very broad overview of the ships and weapons used by the Kriegsmarine. The illustrations and three view depictions of the various classes of ships and submarines are very well done, and the detailed specifications for each class of vessel will definitely make this the standard reference for the Kriegsmarine order-of-battle.