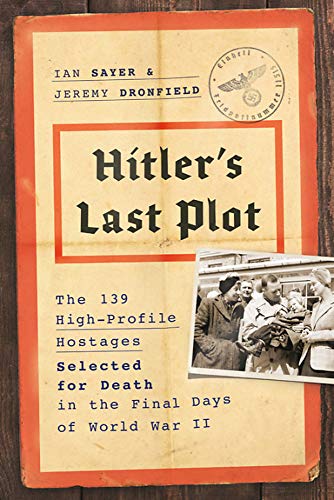 “Hitler’s Last Plot is certainly among the first to bring together a more detailed look at how the Nazis tried to use these people as a means of mitigating or avoiding postwar Allied retribution and how close they were to possible extermination.”

Among the millions of people caught up in the Nazis’ prison and concentration camp system, not surprisingly, were many who were considered high value prisoners. They were both foreign and domestic “enemies of the state.” They were politicians, diplomats, generals, certain nobility, foreign national leaders, anti-Nazi resisters and others who ran afoul of the regime, pastors and clergymen, and real and presumed relatives of many of these, among others.

If there was any difference between these and the other millions, it was that these high value prisoners were kept in relative comfort, comparatively speaking, within the established camp system at places like Dachau, Buchenwald, and Sachsenhausen. Ultimately, they could have been used as hostages in negotiations with the Allies as the inevitable end of the Third Reich approached.

However, in the dying days of the Nazi regime, it was also entirely possible that orders could come down from the highest authority, i.e. Hitler, to execute the prisoners in order to prevent their return to Allied custody if no suitable negotiated arrangement could be reached between the warring parties.

The story of the so-called Prominenten has been known for some time yet has not necessarily been that well publicized. Hitler’s Last Plot is certainly among the first to bring together a more detailed look at how the Nazis tried to use these people as a means of mitigating or avoiding postwar Allied retribution and how close they were to possible extermination.

Besides being members of the categories referenced above, they were also citizens of Germany as well as many other countries from all over Europe: Denmark, Austria, Latvia, France, Hungary, Italy, Greece, Great Britain, the Soviet Union, etc. Many were very well-known while others were less so, being what were referred to as Sippenhaftlingen or “kin prisoners,” those relatives of family members who had crossed or resisted the regime.

What made this story suspenseful and fearful for these prisoners was the fact that not only were they uprooted from camps where they had perhaps come to feel comfortable all while processing the possibility that removal to another camp was just an excuse in order to execute them before they could be liberated. In the event, an order had come down from “the highest authority” that that was ultimately to be the case.

Their removal was also fraught with a lack of comfort, food and drink; attack by Allied aircraft; roads clogged by refugees fleeing the fighting; and military movements to the front and vehicles that broke down or were otherwise subject to the ongoing fuel shortages across the Third Reich as they were moved from each stop or camp along the route.

That their guards were a combination of regular SS and Sicherheitsdienst (SD), the security and intelligence arm of the SS, was another factor for the prisoners to consider inasmuch as the former tended not to be cold blooded killers nearly as much as the latter. Personality conflicts arose as well between the guards’ commanding officers.

As the Allies closed in on what remained of Germany proper, there tended to be an attitude of “what’s in it for me if I surrender without harm to the prisoners?” as opposed to those who would be loyal to Hitler to the bitter end and would face charges of war crimes at war’s end in any event. The prisoners exploited this divergence to their own benefit and salvation, not surprisingly.

Fortunately, this volume contains two maps. With these, the reader may follow the trek across Germany to its final destination in the South Tyrol in Italy along the Austrian border where the odyssey came to its end. The photographic section has many shots of locations, persons, and figures mentioned in the text. The one appendix is a list of prisoner names, nationalities and years of birth and death. As it was, many lived to a ripe old age.

There are also standard footnote citations, a bibliography of published and unpublished archival and other sources, and an index.

Not all of World War II was fought on the battlefield. There were many others who fought the good fight from behind walls and barbed wire, certainly a moral fight by those who took it upon themselves to oppose Nazism and lived to tell the tale.