Hitler's Commando: The Daring Missions of Otto Skorzeny and the Nazi Special Forces 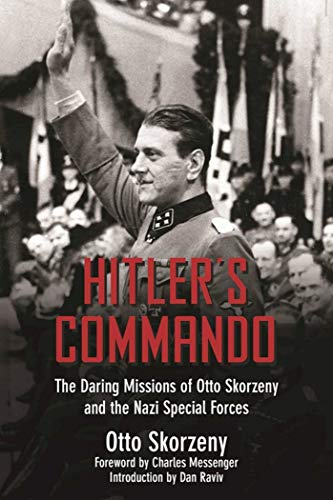 “the reader is left with the impression of a brave and resourceful man who served an evil cause . . .”

Memoirs and autobiographies are always problematic books. On the one hand, they are first-hand recollections of events, providing primary source accounts of historical events. However, they are often full of distortion, half-truths, or outright fabrications depending on the author’s desire either to protect his reputation or tarnish a rival’s.

This is especially true of the memoirs of German World War II generals and soldiers. While the common soldiers often have similar experiences to their American or British counterparts—the shared misery of living in the field, the constant threat of death, and the overall experience of combat—senior commanders often have very divergent viewpoints on battles and campaigns.

German generals in particular have acquired a reputation of both overinflating their own ability to win the war if “only Hitler hadn’t gotten in the way,” and minimizing the war crimes and atrocities conducted by the Nazi regime, either with the direct or benign support of the military.

This volume, originally written by Otto Skorzeny in the late 1950s, provides some interesting insights into the character of the man Allied wartime intelligence once called “the most dangerous man in Europe.” A revised edition containing a new foreword and introduction, this short memoir provides his account of his most famous wartime exploits and some interesting insights to his attitude toward the war, Hitler, and the Nazi cause.

By his own report, Skorzeny was a fairly average soldier before a chance encounter with Hitler and the assignment to rescue Benito Mussolini from his Italian mountaintop prison hurled him into Hitler’s favor and the Allies’ attention.

The story of Mussolini’s rescue is fairly short for being the most important event in Skorzeny’s career. Although the rescue is often studied as a textbook special operations mission, his recounting of it is somewhat anti-climactic. The biggest challenge for Skorzeny and his team was finding where the Italians had imprisoned Mussolini after the fall of his government and the Allied invasion at Salerno.

This tale was definitely an interesting chase scene and there can be no doubt of Skorzeny’s battlefield courage from his recounting of being shot down on a reconnaissance flight to find the redoubt, and leading the assault by flying with a group of German paratroopers and commandos in a flimsy glider made of canvas and aluminum tubing to assault the mountaintop hotel where Mussolini was kept.

But the middle part of the book is not nearly as interesting.  Skorzeny seems to sympathize with the German generals that conducted the July 20, 1944, bomb attack that nearly assassinated Hitler, which seems a bit incongruous with his earlier ardent support and admiration for Hitler. The reader is left wondering how much of this is perhaps pandering to a Western audience looking for “good” German officers in the post-war period when Communism became a greater threat than Nazism, or if he was genuinely sympathetic to these officers.

The action picks back up again for Skorzney’s final two notable missions, the overthrowing of the Hungarian government of Admiral Horthy that was seeking a separate peace with the Soviets in the fall of 1944, and his most famous mission, the creation of German special units disguised as Americans to assist in the German 1944 Ardennes Offensive, known to Americans as the Battle of the Bulge.

The Ardennes operation really stands out in this book. Although Skorzeny tries to make the operation more useful than it was, from a strictly military point of view the mission was a complete failure. The German commandos were assigned to capture bridges over the Meuse River to hold them for German panzers to cross on their way to the ultimate objective of Antwerp, and they were not able to capture a single bridge.

Yet the propaganda and psychological warfare aspect of the mission were far more successful. Once the first group of Germans was captured and spread wild tales of dozens of German saboteurs disguised as American soldiers conducting missions behind the lines, the entire Allied front was consumed by GIs looking for German spies. Although Skorzeny only mentions it in passing, the rumor that his commandos were trying to attack the Allied Headquarters forced American military police to practically imprison General Eisenhower in his headquarters for days during the battle for fear Skorzeny might succeed.

The final part of the book is mostly his tale of his captivity at the end of the war, his trial and acquittal on war crimes, and his general impression of imprisonment before he was released from Allied custody.

It is interesting to note that he was questioned on multiple occasions about the massacre of American POWs at Malmedy during the Ardennes offensive, which he not only denied, but refused to acknowledge the German Army could do, although it was the most notorious event of the battle and was, in fact, conducted by members of a Waffen SS Panzer unit nearby.

In the end the reader is left with the impression of a brave and resourceful man who served an evil cause. Skorzeny was no coward, but he certainly was not repentant for what the Nazis did, either, refusing to acknowledge any atrocities, especially the massacre at Malmedy, and it is clear that although he accepted the defeat of Germany, he does not seem to have abandoned the Nazi cause.