Hitler Saved My Life: WARNING―This Book Makes Jokes About the Third Reich, the Reign of Terror, World War I, Cancer, Millard Fillmore, Chernobyl, and ... Nude Photograph of an Unattractive Man. 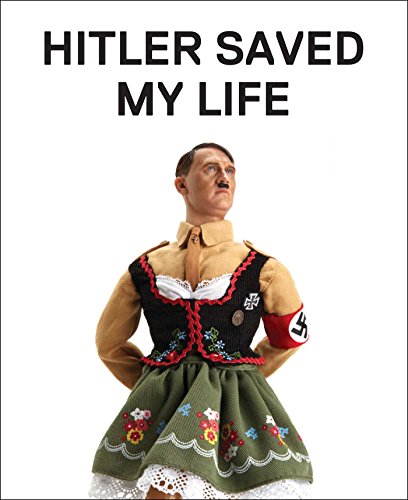 No, this isn’t a memoir written by Richard Spencer. Instead, Hitler Saved My Life, by Jim Riswold, is one man’s journey with having leukemia and the redemptive power of art. In this case the art involves putting Hitler in a dress and turning Kim Jong-il into a lollipop. A lengthy warning label offers insights into Mr. Riswold’s artistic process. It states, “WARNING: This book makes jokes about the Third Reich, the Reign of Terror, World War I, cancer, Millard Fillmore, Chernobyl, and features a full-frontal nude photograph of an unattractive man.” In other words, this isn’t the usual tearjerker cancer story. It is a gleefully offensive cancer story. It is the Blazing Saddles of cancer stories.

Jim Riswold may not be well known, although his advertising campaigns are. He did the “Bo Knows” campaign. He teamed up Michael Jordan with Bugs Bunny and Spike Lee with Nike. According to his biography, he worked at Wieden+Kennedy and did “some other stuff that sold a lot of shoes. Before his days as a glorified shoe salesman, he co-wrote Ulysses with James Joyce and singlehandedly won the Crimean War.” He calls himself a fake artist, but this is getting ahead of the story.

In 2000 he was diagnosed with leukemia. He eventually quit the world of advertising and began making “Hitler art.” This was Riswold’s demented version of art therapy. It made him feel better, but it made his family, co-workers, and the Portland art scene feel a bit uncomfortable. His art had titles like “Goebbels's Daisy,” “Heydrich Slips in a Tub,” and “Hitler in Dior.”

Riswold considers himself a “fake artist,” since he did very little of the actual creation. He bought the Third Reich figures online, and he had a professional photographer take the pictures. On the other hand, Riswold functioned as a kind of creative director in the art-making process. He came up with the titles and staged the pieces.

Juxtaposed between these satiric images of Third Reich leaders, he tells his cancer story. He swears a lot. He complains about the American healthcare establishment. He also hammers away with paragraphs of declarative sentences. What he lacks in literary elegance he makes up for with acid wit. His background in advertising gives him an expertise in exposing the layers of doublespeak, medical jargon, and bureaucratic headaches involved in his cancer journey.

“I do not qualify for a clinical trial of STI-571 because while, yes, I have leukemia, and, yes, leukemia is bad, my leukemia is not bad enough yet. It is against the rules for me take a medicine that has the best chance for saving my life.” He even invents a new term for what he experienced. Instead of Kafkaesque, his experience was Kafkaesquer.

The mixed success of his funny Hitler leads Riswold to branch out into other subjects. He creates a series of photographs based on the French Revolution to raise money for his daughter’s school. Later work pokes fun at Chairman Mao, German philosophers, and Jeff Koons. “Jeff Koons Does the Dishes” is a dish rack of plates and bowls with Jeff Koons art on it. Another photo is titled “The People’s Liberation Army Goes Shopping (For a Jeff Koons Balloon Dog).”

As should be obvious by now, Hitler Saved My Life isn’t for everybody. It takes the depressing topic of cancer and lightens the mood by making fun of history’s bullies. Dictators, Nazis, and Kim Jong-il relied on a scared populace, but Riswold takes another tack. Hitler isn’t scary, he’s a punchline.

While it could be argued that his cancer gave him the necessary out for making Hitler art, this hasn’t stopped someone like Mel Brooks. In this age of rising autocracy and skeevy alt-right bottom feeders coarsening the political discourse, one thing remains clear: Tyrants hate being laughed at. Cancer is bad. So is Hitler. When people point and laugh at what scares them, things get a little better.