Hitler in Los Angeles: How Jews Foiled Nazi Plots Against Hollywood and America 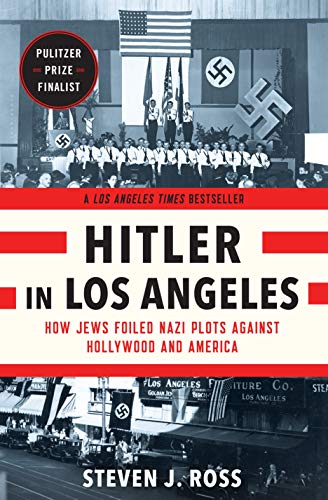 “No American city was more important to Nazis than Los Angeles; home to Hollywood, the greatest propaganda machine in the world. Nazis planned to kill the city’s Jews and to sabotage the nation’s military installations. Plans existed to hang prominent Hollywood figures in public, for driving through Boyle Heights (primarily Jewish) and machine gunning as many Jews as possible; and for blowing up American defense installations and seizing munitions from the National Guard armories along the Pacific Coast.”

This true story of WWII describes Hitler’s largely unknown plan to occupy and control the United States, beginning with Los Angeles, and the takeover of Hollywood for use Nazi in propaganda. This was a time when anti-Semitism in the United States was alive and well with numerous hate groups urged on by the bigoted likes of Henry Ford and Charles Lindbergh.

Here we find a chilling, captivating story of espionage and resistance by two brave Jews and their cadre of daring spies who infiltrated Nazi organizations in Southern California. They were not government agents. Nor were they active in the U.S. military. They were not paid by the FBI or the OSS (precursor of the CIA). They were brave citizens who put their lives on the line to protect America from Nazi Germany. Their courage, along with funding from private Jewish organizations and Hollywood studios, enabled them to succeed.

Not long after Hitler assumed power in Germany, Los Angeles attorney Leon Lewis and his associate spymaster Joseph Roos began to gather information about militant German organizations in Southern California. To accomplish this, they gathered, trained and deployed spies who infiltrated the German Bund and similar organizations. To their shock, as early as 1936, German militias in the Los Angeles area were plotting attacks against United States military locations and naval vessels.

American Jews and Hollywood studios were also a primary target for Nazis in Los Angeles. Hitler and his propaganda chief Joseph Goebbels understood the power and influence of Hollywood as a potential propaganda tool. But before they could take over the American movie industry, they needed to eliminate the Jews who owned many of the major studios.

Rather than hide and plot treason, Nazis in Los Angeles brazenly distributed anti-Semitic literature in an attempt to turn Americans against their Jewish neighbors. They dropped hate-filled flyers against Jews from airplanes and skyscrapers, used radio attacks and posted anti-Jewish newspaper articles. Nazis and their sympathizers created a 50-acre compound which was to be “Hitler’s West Coast headquarters, after the Nazi takeover.”

German organizations added members constantly. Yet their intent remained clouded from mainstream American media and the government. Leon Lewis had influence with the American government and military because of his stature as a brave soldier and his connections in Washington. Yet in the early years of Roosevelt’s first term, during the Great Depression, no one seemed interested in the machinations of Hitler and his beer hall putsches.

When the war finally began, no one in Roosevelt’s administration seemed interested in helping Jews, whether in Europe or in America. The State Department was heavily influenced by anti-Semites then, like Breckenridge Long. Few in Washington seemed interested in recognizing the nefarious plans of Nazis in Los Angeles—even after presented with Lewis’s proof that an invasion was certain to follow. They certainly did not lift a finger to help American or European Jews.

Leon Lewis and his spies displayed intense courage in the face of extreme danger as they spied upon German organizations in and near Los Angeles. Their commitment to fight Nazis in America and their willingness to risk their lives to help Americans in peril is astounding. Nazis began to call Leon Lewis, “the most dangerous man in America,” because of his intense determination to uncover and destroy Nazi plans to occupy and control the United States.

Author Steven J. Ross employs impeccable research and a driving no-holds-barred writing style, revealing a shocking Nazi plot to invade America, to control it as part of “Greater Germany”; to control Hollywood by turning it into a German propaganda machine and to murder as many American Jews as possible.

Today in America, we’re faced with marches and public displays by white supremacists who chant, “Jews will not replace us.” We witnessed this as recently as in Charlottesville, Virginia, in 2017. This book may serve as a brief call to arms for Americans who think that fascists cannot control our society. Let this be a warning that will never go unheeded by our leaders.

Ross’ story of daring hometown resistance against militant German groups who were plotting America’s demise is captivating and intense. His nonfiction revelation of Nazi plans to invade Los Angeles reads like an exciting spy novel. Ross reveals this true story of resistance by American Jews and Gentiles with an exciting, evocative writing style. Readers will never be able to think about Nazi Germany and California the same way again.