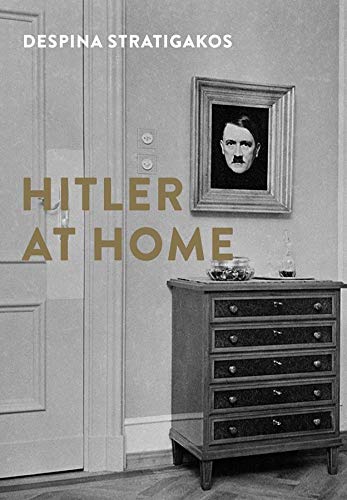 On September 18, 1931, the Regensburger Echo ran a front-page article, “Suicide in Hitler's Apartment.” The body of Geli Raubal, Hitler's niece, was found with a single gunshot wound to the chest. Hitler, the head of an extremist political party, was also unmarried.

By all accounts, the suicide seemed rather suspicious and exposed the strange domestic relations of the darkly charismatic political figure. Despina Stratigakos begins with this incident in her new book, Hitler at Home, a handsomely produced volume that explores how Nazism used domestic architecture to construct Hitler as a normal member of the middle class. The book is divided into two sections. The first is an architectural history of Hitler's three homes. The second section investigates domestic and international coverage of Hitler in domestic settings.

Stratigakos is the associate professor of architecture at the University of Buffalo, State University of New York. Her mother suffered under the Nazi occupation of Kefalonia. This personal history energizes the project, adding an immediacy to this specific analysis of The Third Reich.

Instead of focusing on the neoclassical gigantism of Albert Speer, she focuses on the works of Gerdy Troost. Troost, like Leni Riefenstahl, was a highly influential woman in the Third Reich, instrumental in successfully manufacturing the image of Hitler. The book explores three important domestic spaces used by Hitler: the Old Chancellery in Berlin, his Munich apartment at 16 Prince Regent Square, and the mountain home on the Obersalzberg. The main objective of Hitler and the Nazi apparatus was for these three spaces to make Hitler appear like a learned member of the German middle-class.

Both Nazi propaganda and a compliant foreign press (in this case English and American) assisted in normalizing Hitler, defanging the poisonous ideology and murderous rise to power. The foreign press willingly played along, turning the shouting former Austrian corporal into a benevolent uncle commiserating with children and the locals with folksy charm. Stratigakos reveals that Hitler, like any modern politician, is only a manufactured commodity.

The domestic spaces are explored through the use of archival photographs, architectural elevations, and, in one case, a surviving fabric book for Hitler's Berghof estate. It shows that the Nazi regime did indeed have a particular design style, a kind of völkisch Modernism. The photos of the interior design and china table settings exhibit a refined tastefulness. But Stratigakos makes sure the style doesn't seduce, since the regime's elegance was built on mass murder, foreign conquest, and moral hypocrisy.

On numerous instances, the author tells how Hitler's three residences involved him selling the notion he was an ordinary German. In fact, his residences cost numerous times what a laborer would have earned. When Germany became mired in a losing war on two fronts, Hitler still worried about interior design and other minutiae. When the war ends, the Berghof becomes a problematic tourist attraction. The domestic spaces of Hitler continue to bedevil historians and German citizens alike, the residences possessing a moral contagion seemingly impossible to eradicate.

Hitler at Home is a magisterial interdisciplinary history that explores the domestic spaces used by Hitler. In these modern times where Hitler has become a punchline, an excuse, and a caricature, Stratigakos reveals the stories behind his three homes. She also unearths the life story of Gerdy Troost, an influential figure in Hitler's entourage, and a woman who thrived in the male-dominated militarist world of the Third Reich.