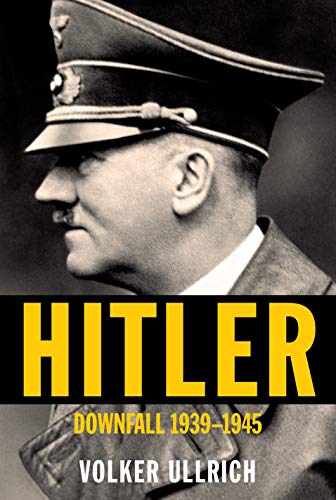 “Ullrich’s work is a remarkable treatise on the malevolence of power in modern times. Take care, lest we fall into the trap of autocracy.”

It is valuable to learn how autocrats and dictators gain power and rule their followers. Adolf Hitler was the paradigm tyrant, a vicious killer who overwhelmed Germany with his rhetoric and bitterness toward familiar targets who he claimed had sabotaged the greatness of the Teutonic people. He weaponized hatred and resentment. There are an estimated 128,000 books published about the Austrian private whose actions resulted in the death of over 50 million people. Why publish another book? Because it is superb and will be considered the definitive work about this evil despot.

Volker Ullrich, a German historian, has written an authoritative two-volume work on the life and death of Adolf Hitler. The first volume covers Hitler’s rise to power. The second volume details the war he started that concluded with his suicide. Ullrich’s work is a monumental undertaking, with 632 pages of text, followed by an extraordinary set of notes and maps of the war. Jefferson Chase, a Berlin-based journalist, translated Ullrich’s text, retaining the cadence of the original German.

Even students of the Fuhrer’s notorious rule will learn about new incidents that occurred during Hitler’s regime. Most know about the Stauffenberg assassination attempt in 1944, but there was an earlier failed attempt on Hitler’s life. Hitler’s spellbinding speechmaking before adoring crowds was also well known, but most of the Fuhrer’s speeches were transmitted by radio. Few remember that Hitler’s rise to power in 1933 as Chancellor was the result of a lawful election.

There are revelations in this book that will cause Americans to pause. Hitler was a repetitive liar. He had his own set of alternate facts that lay at the core of his beliefs. His temper tantrums were frequent. Hitler first saw the Jews as immigrants who should be deported from the Fatherland. Briefly, he considered exporting all Jews to Madagascar. Only later, as his Wehrmacht conquered most of Europe, did Hitler realize that extermination was the only way to make Europe Judenrein (“clean of Jews”).

Hitler’s reckless attack on the Soviet Union which ultimately led to his downfall hides the fact that he admired Stalin’s ruthlessness. After his defeat at Stalingrad, Hitler ordered his troops to never surrender and to die fighting. They did so in large numbers.

Ultimately, when Hitler’s war produced only setbacks after a string of easy victories, the Fuhrer blamed everyone and anyone else. He never accepted responsibility for anything adverse. He did not have to deal with a free press. Newspapers were solidly Nazified or closed down within months of his taking power. Remarkably, he did worry about losing the devotion of the Deutsche volk. The people, however, remained loyal to the leader who they thought was God’s anointed, the Chosen One. Ultimately, Hitler lost faith in the German people. They had failed, not Hitler.

Ullrich’s work is a remarkable treatise on the malevolence of power in modern times. Take care, lest we fall into the trap of autocracy.