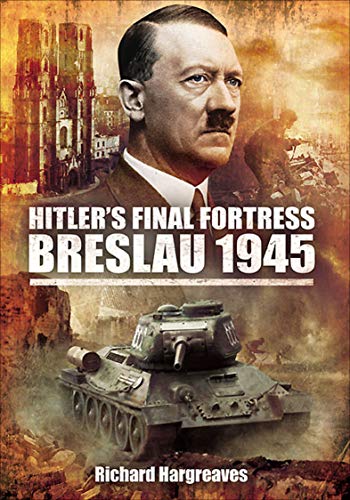 It should have been evident that it would only be a matter of time before roles were reversed on the Eastern Front: Germany would be on the strategic defensive and the Soviet Union would take the war to the German homeland. Germany would reap what she had sowed in attacking her Communist neighbor in 1941.

During the course of the fighting retreat back to the Fatherland, Adolf Hitler designated a number of cities as fortresses to be defended to the last man and last cartridge in an attempt to tie up large formations of Soviet troops and give the Wehrmacht time to shore up its defenses. Hitler, unreasonably, also expected every foot of German soil to be defended even though his armies’ manpower was being bled dry on every front.

Author Richard Hargreaves has undertaken to describe Fortress Breslau and its nearly 90-day siege in early 1945. As was the case with the other so-called fortresses, Nazi party leaders were in denial, relying on propaganda, fighting spirit, and draconian measures (shootings and hangings for perceived cowardice and desertion) to overcome manpower and material deficiencies. They refused to allow, until the last possible moment, the evacuation of women, children, the old, the infirm. Such an action was considered, not surprisingly, defeatist.

In the event, Breslau did hold out almost to the official end of the war before the fortress commander surrendered, primarily because the Soviets’ emphasis became the capture of Berlin, relegating Breslau to a backwater. In the meantime, however, what had once been a Silesian cultural gem was turned into a vast ruin and graveyard, with survivors living in cellars and whatever other shelter could be found, eating what could be had and teenage boys being pressed into service against the Soviets.

At the end, following the surrender, the citizenry suffered what was the usual fate of German cities. In spite of the surrender terms which guaranteed good treatment, the Soviets, stoked by alcohol and bent on revenge for what the Germans did in the Soviet Union, proceeded to plunder, pillage, rape, and sometimes murder their way through the city.

After the war, Breslau became Wroclaw and was incorporated into Poland as its borders were moved to the west to accommodate, and validate, Stalin’s seizure of eastern Poland in 1939. The city was “de-Germanized,” and most of the remaining population was forced to resettle to either of the two postwar German states. It was years before the city rose from the ashes, with much of what could be salvaged in the way of building materials being sent to rebuild Warsaw.

Although this volume is considered one of military history, and there are descriptions of some of the combat that occurred (urban combat, air attacks, and artillery shelling) the author has chosen to concentrate primarily on the perspective of the city’s inhabitants and what they were forced to undergo. It is much more of an intimate, personal, through-their-eyes account of the siege, told through primary sources such as diaries, memoirs, newspapers, official reports, documentaries, interviews, and recollections of survivors and their descendants.

This does not detract from what is a hard look into an all or nothing defense of the city, orchestrated by the Wehrmacht and the Nazi Party. Its fanatical defense of National Socialist principles and the ongoing hope that German forces outside the city would beat back the Soviet armies and relieve the inhabitants kept the defense going as long as it did.

Helpfully included in this volume are 11 maps which show many of the prominent locations and buildings mentioned in the text, the city center, and suburbs, towns in the outlying areas, the frontlines and ongoing military situation, and a contemporary look at the city now. The photographic section provides prewar looks at many of the buildings, locations, and amenities, the postwar destruction of same, a modern day look at the rebuilt city, as well as artifacts and other items related to the siege.

Extensive notes are located at the end of each chapter and generally identify the source of quotations in the text. As noted above, sources were more than ample to provide an in-depth look at the actions, destruction, and suffering that occurred in the city.

For a brutally honest and personal look at World War II urban combat and the consequences of fighting under a totalitarian regime and its policies, one need look no farther than Hitler’s Final Fortress.