Hitler, Mussolini, and Me 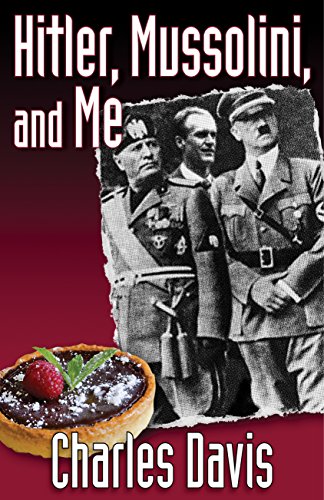 Charles Davis skewers Hitler and Mussolini in a witty satire that reveals the twisted personalities of two monsters whose acts of atrocity were fueled by their own inadequacies, both physical and moral.

Dubbed by Davis’s fiction narrator, Irish ex-patriot and self-proclaimed art historian Colgan as The Flatulent Windbag and The Constipated Prick, Hitler’s interminable monologues and Mussolini’s insecurities as a dictator are described in a series of often scatological vignettes that evoke equal parts of laughter and self-conscious guilt. One feels guilty for laughing at two such vile tyrants, but Colgan says that “real people are far more frightening than bogeymen and monsters because we cannot pretend they are something ‘other.’”

Colgan faces a crisis when his grown daughter finds a yellowed newspaper clipping of her father photographed with Hitler and Mussolini during the Nazi dictator’s 1938 visit to Italy. The headline says “The Man Who Saved Hitler and Mussolini.” Appalled by what she sees as “dear old dad hobnobbing with two of the century’s most notorious dictators,” she stomps out of her father’s apartment before he can give her any explanation.

Colgan writes a memoir about his meeting with Hitler and Mussolini so his daughter will know the circumstances behind his serving as Hitler’s guide and expert on Italian art and architecture. If his daughter returns, he will give her the memoir; if she only returns to arrange his funeral and dispose of his belongings, then she will find it among the other bits and pieces of his life. He only hopes that she will eventually understand. “We are all tainted by the compromises we make. These things happen.”

Colgan’s selection as Hitler’s guide is not by choice; it is more in the nature of an offer he can’t refuse. When Mussolini’s Fascist government chooses you for a particular role, it is safer to accept than to decline. Mussolini may be a balding, corseted buffoon, but he is still the dictator even though Colgan believes “he always seems to be faking it, like a little boy shouting ‘Me, too!’”

Still resentful of being chosen as Hitler’s guide, Colgan, with Mussolini and other Italian dignitaries, meets Hitler’s train: “the man who alighted from the train was remarkably unremarkable . . . he had a long body with short legs attached like an afterthought.”

If Colgan is unimpressed with Hitler’s physical appearance, he is much struck by one attribute of Hitler’s not mentioned in most history books: the Nazi dictator’s eye-watering, sinus-stinging flatulence. Much of the scatological comments Colgan includes in his memoir deal Hitler’s very unpleasant—and frequent—expulsion of intestinal gas. “But after a few days in his company, I could understand why he had to wear those awful lederhosen: given his gastric affliction, ventilation was vital.”

Colgan notes in his memoir that Mussolini had the opposite problem from Hitler: Mussolini had chronic constipation. Although Colgan cannot prove that the tyrants’ gastrointestinal problems had an impact on the war, he does not rule it out.

Another trait of Hitler’s that nearly drives Colgan into gibbering madness is the Fuhrer’s incessant talking. “But Hitler was merciless, going on and on like some old Norse saga while his listeners engaged in an equally epic battle to stay awake.” What is so gripping is that all the dialogue of both Hitler and Mussolini are their actual words, sometimes used out of context, but nonetheless it is their words and frightening in the sense that both Hitler and Mussolini said exactly what they believed. Colgan admits that his generation should have listened more closely, but he says that in 1938 no one could imagine the Holocaust.

Colgan does admit that he contemplates assassinating both Hitler and Mussolini, and he has two opportunities to do so, but neither time attempted any action. “I mean, I’m really not cut out for killing people. I can skewer them with words, but organizing the nitty-gritty of physical harm is beyond me. “ He sums up his failure by saying that “Opportunity is often presented to people incapable of seizing it.”

Hitler, Mussolini, and Me by Charles Davis is humorous, satirical, and filled with the irony that all the clues to the coming atrocities were there to be seen, but few had the imagination to follow them to their logical conclusion. The jokes that Davis sprinkles through the manuscript are jokes told at the time by the Nazis and the Allies.

In his Afterword Davis lists books for those interested in further delving in to the personalities of Hitler and Mussolini. Many of the book titles and certain expressions used in the story are not translated from German or Italian, which is a very minor irritant for the reader not fluent in either language, but it does not adversely impact a reader’s enjoyment.

Although superficially a witty, satirical historical novel, Hitler, Mussolini, and Me also asks profound philosophical questions about how that generation could have followed two such physically unattractive men whose political beliefs were based on envy, greed, and hatred. They are questions to ponder long after the last page is turned.