The History of Living Forever: A Novel 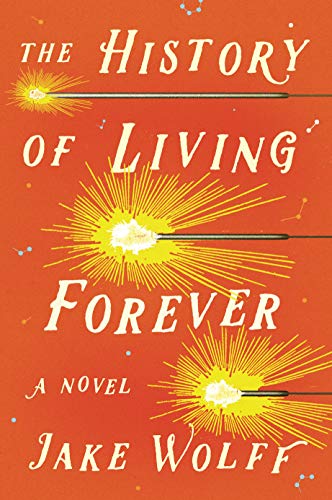 “Reading The History of Living Forever is a thoroughly enjoyable experience.”

In the acknowledgements, Jake Wolff notes that he spent ten years writing The History of Living Forever. This is one of those big, ambitious first novels. The book spans 24 years in the life of its narrator, Conrad, but the event that sets the narrative in motion is the death of 16-year-old Conrad’s high school chemistry teacher and lover, Sammy Tamari.

Sammy’s death leads Conrad on a search for why he died and an attempt to finish Sammy’s obsessive quest for the elixir of life. The novel jumps back and forth from young Conrad’s attempts to keep his feckless, alcoholic father from dying to 40-year-old Conrad’s anxiety over his husband’s brain cancer.

Wolff also gives us in Sammy’s life story a physically beautiful, brilliant man who never feels connected to anyone—who only feels happiness briefly after electroshock treatments. All that keeps Sammy going is his crazy hunt for the elixir of life, not because he wants to live forever—Sammy has suicidal tendencies—but because it might be a panacea, something that would bring him more than fleeting glimpses of happiness and connectedness.

Sammy’s unhappiness seems to be a magnet for loving people: young Conrad; Catherine, Sammy’s ex-girlfriend and mother of his son; and Sadiq, with whom Sammy has a five-year relationship. Sammy hurts and betrays all who love him, but after his death they still come together to complete his work. Sammy isn’t the only character with a history of betrayal. Young Conrad also hurts the people closest to him, particularly his devoted friend RJ. The hunt for the elixir brings out the worst in people.

Yet The History of Living Together is also a celebration of the possibility of love, of the gift of loving. Young Conrad did love Sammy and is now devoted to his ailing husband. Sadiq and Catherine loved Sammy, though perhaps it was his spiritual darkness that was the magnet.

The quest for the elixir joins Conrad and his companions with some bizarre characters who are also after the elixir: a ruthless, money-grabbing doctor; two Romanians from the Immortalist Underground; and a super-rich, unnamed Celebrity Client. Sometimes these figures are allies, sometimes dangerous rivals. In the hunt for the elixir, no one can be trusted.

Like Russian nested dolls, The History of Living Together (the title of a book Sammy wants to write), contains stories within stories. Forty-year-old Conrad is driven to tell the story of his attempt at 16 to finish Sammy’s work and solve the mystery of his death. Sixteen-year-old Conrad pieces together Sammy’s story from notebooks Sammy has left him. Sammy’s search for the elixir absorbs stories of earlier quests that stoked his obsessive mind.

At times, the novel reminds one of the work of Thomas Pynchon in its paranoid sense of a dark, secret world underneath what we think of as normal reality, but Wolff has his own, unique vision and a gripping poetic style. His characterizations sometimes call to mind Michael Chabon’s best work. The book is filled with surprising, apt metaphors, of memorable aphorisms. There’s a great deal of poetry in Wolff’s writing, and his style both carries the reader along and makes her stop and enjoy particularly lovely bits of verbal scenery.

Reading The History of Living Forever is a thoroughly enjoyable experience.