A History of Britain in Thirty-Six Postage Stamps 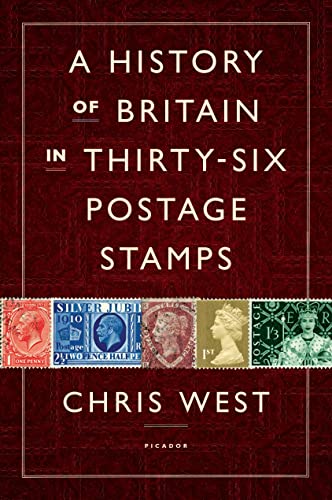 “. . . a perfect summation of the last few centuries using stamps as the guideposts.”

There is a beauty that goes beyond the image chosen to grace the front of any stamp. It is found in the stories that surround its creation, the circumstances that brought it about, and the people who contributed either directly or indirectly to the stamp itself.

In 1840 a little piece of glue and paper could take your thoughts from one end of England to the other. In a few years it could allow you to communicate with America or a brother in Australia.

Husbands at war were no longer lost to wives, companies could reach out to new customers, and politicians found a new way to harass voters with their spin, false promises, and baloney.

The arrival of an organized postal delivery and affordable postage was a revolution. The birth of Britain’s modern postal system in 1840 is the opening note of Chris West’s A History of Britain in Thirty-Six Postage Stamps. The stamps he singles out take us along the next 250+ years of British life.

Images gracing these stamps begin with the stoic profile of a new leader. On the Penny Black, 1840, Queen Victoria is seen in profile, her head looking out into the future. The stamp is simple and straightforward. Without saying a word it speaks loudly about what is ahead for the English people.

Her reign comes to embody the best of English virtue, dedication, and public spirit. Building on the changes brought about by the Industrial Revolution, the county moves to the world stage by taking the best of the “British stiff upper lip” mentality and making it work.

But there are millions left behind. Mr. West never hesitates to remind us that behind the brightness of success there are many who can barely see the light from such a distance. They are left behind hungry, tired and poor.

These dark corners, the hideaway places that politicians only seem to only to remember at election time, are just as much a part of history as triumphs in Parliament or on a battlefield across an ocean.

With grace and an occasional knowing wink, Mr. West moves with balanced authority over the years. His style and understanding of what it means to be British keeps him from slipping into a dry recitation of events. He not only tells us the story behind each stamp, but he incorporates other disparate factors into the mix.

Few aspects of history escape this overview. He dives into the feelings of the people, the motives behind the politicians, the events that were beyond the control of the country.

In a simple and direct language he writes of the changing mores and attitudes of the country. The way that over time, the class structure begins to rupture and the strict lines of demarcation seem to dissolve.

Mr. West understands that history is not just one specific date or a fixed event on a country’s calendar. The calendar is a reference point, but that is all. The real story is in the overlap in these stories, the way that people and ideas can straddle one era and affect others.

In the case of Charles Dickens he makes the point that, while Dickens is associated with the Victorian Era, what shaped the man came from what preceded that time. As an example of the hypocrisy that hides behind the public image that Victoria’s reign was one of tight, constricted behavior he slips in references to Dickens’s own affair with an actress or the underlying mindset behind the “homo-erotic spankings” found in education.

Art, sports, and culture move Britain as much as the rhetoric of politicians. When the Beatles arrive on the scene the country is still working through the after-effects of the Second World War. Their arrival has the same effect as Judy Garland opening the door to her farmhouse and finding the colorful world of Oz laid out in front of her.

But like Oz, much of that world is a dream. For outside of London and Carnaby Street and Strawberry Fields there is still a lot of black and white countryside and broken government programs, fighting unions and people looking for relief.

As detached as he is from what he writes about, he ought to acknowledge sometimes the hypocrisy in a situation: such as that of those who took umbrage at Sid Vicious’s version of “My Way.” Their inability to grasp that what he was doing was nothing but following through on the promise of the song itself.

The story really isn’t about the song, it’s about the people around the story and the different ways they interpret the action. It becomes a metaphor for a political regime who can’t understand the hypocrisy or failure in their own beliefs.

The death of Princess Diana almost fractures the British reserve—a reserve Mr. West fully understands. But he also knows that the story is just as much about the changing place of royalty and media in the British Empire as her death.

When the 21st century arrives electronics build on the world of the postage stamp. Computers and the Internet have made communication immediate. Information travels so fast that we almost can’t keep up with it.

Spin becomes truth. Tabloids influence politics and leaders. Stocks and securities are traded so fast that their actual worth becomes nearly irrelevant.

Through it all the stamps that adorn the letters and mail of the country tell a story about its people and place in the world. The art chosen reflects the country and its leaders. But it can also inspire.

For someone outside of Great Britain who is looking to understand the country, A History of Britain in Thirty-Six Postage Stamps serves as a perfect summation of the last few centuries using stamps as the guideposts.