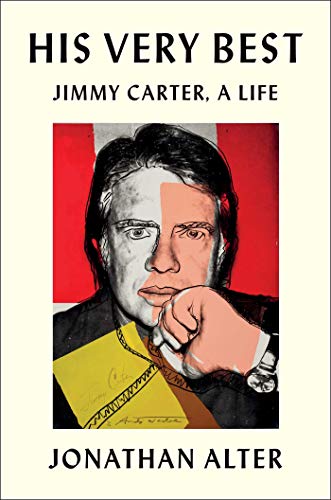 “Alter provides a multi-dimensional portrait of an American president’s journey as a husband, father, and perhaps his most fulfilling role, as humanitarian.”

Historian Jonathan Alter’s His Very Best is a compelling portrait of President Jimmy Carter, whose four years in office were full of achievement and missed opportunities because of world events largely out of his administration’s control.

It is obvious that Alter still admires Carter greatly but does not pull any punches from examining his failures as well. And the author interviewed Carter many times for this thorough and deftly condensed assessment of the political legacies of the Carter administration.

But there is so much more about Carter’s life than his term as the 39th president, a life that is, on balance, equally fascinating, starting from his childhood growing up in Plains, Georgia, where his family didn’t have running water or electricity until he was 13, to being a prolific bestselling author and globally respected activist, humanitarian, philanthropist, and American folk hero in the decades after his term in office.

Among Carter’s unheralded policies he was passionate about was confronting climate change, initiating détente with adversarial nations, as well as a host of proactive domestic policies in agriculture, technology, medicine, and education.

Carter was lauded for his attention to details and scientific approach to solving problems, as well as his home-grown charisma and candor. But as Alter reveals, Carter could also be politically impulsive, overconfident, and furtive.

Overshadowing his administration’s achievement was skyrocketing inflation of the late ’70s due to OPEC’s political maneuvering of world oil prices. The standoff caused long lines at gas stations, job loss, and economic strife in the US—all seditiously tangled by the siege of the American Embassy in Iran as the Shah’s regime collapsed, sealing Carter’s fate as a one-term president.

Alter also brings dimension to Carter’s personal life, including his complex relationships with his father and the indomitable Lillian Carter, who became a celebrity in her own right. And his celebrity siblings, the rabble-rousing Billy and his famous evangelical preacher sister Ruth. Alter also touches on Carter’s sometimes difficult, but devoted relationships with his own children.

But at the center of everything in Carter’s life is his marriage to Rosalyn. They have been married for more than 70 years. Alter quotes Carter’s poems to Rosalyn and excerpts from the couple’s letters while Carter was at the Naval Academy.

After his graduation, Carter carved out a stellar record as an officer, up the chain of command and those he commanded, known for his evenhandedness and scientific approach to every problem. He was a commissioned officer on the first US nuclear submarine. His expertise extended to the near catastrophe at the Three-Mile Island nuclear accident in 1979.

Although they hadn’t intended to raise their family in Plains, the Carters moved back to Plains after Jimmy’s father died to save his peanut farm. And when he entered politics he was viewed as a hayseed peanut farmer, but in reality he was an innovative business leader.

And when he first flirted with running for office, he wasn’t squeamish about playing hardball politics. This included being dodgy in his private and public position on segregation and the Black civil rights movement. When he first ran for political office in Georgia, he was reduced to dog-whistling messaging, for instance, about Jim Crow laws and luring George Wallace segregationists into his camp.

Carter later publicly admitted that he regretted being late to the cause of the Black civil rights movement and tried to make up for his past positions. When he was elected in Georgia, he publicly rejected the structural racism that had been the bulwark of Dixiecrat politicians.

In 1979, Carter was gearing up to seek a second term, but Ted Kennedy decided to challenge him for the nomination. Meanwhile, Carter was embroiled in the uncontrollable situation in Iran when exiled cleric Ayatollah Khomeini returned to Iran, lead the revolution, and deposed the US protected Shah of Iran. He was installed there in 1953 by the US to ensure American political and financial assets, and as an outpost to monitor Soviet aggression. Iranians stormed the US Embassy, and held 51 American hostages—this became a 444-day standoff.

Carter was against letting the Shah of Iran seeking medical asylum in the US and was politically pressured into it by a meddling Kissinger and the Rockefellers.

Carter’s hands were tied, and he floundered, even though his main objective was not to risk the hostages lives with Khomeini, who wouldn’t have hesitated to assassinate them if provoked. The standoff led to Carter looking weak.

And his deep background and is expert of his ability to detailing and de-tangling complex political events. Alter’s account of the historic 1978 Camp Davis Accords is a gripping condensed chapter of geopolitical wrestling and clashing worldviews between Egyptian president Anwar Sadat, Israeli Prime Minister Menachem Begin, with their strategy teams in tow, and Carter playing host and running interference for 13 days. Carter’s finesse lay in getting the leaders back to the bargaining table when they were repeatedly looking for excuses to back out.

Alter cites Carter’s “virtuosic” diplomatic win at Camp David as one of the most significant peace treaties, however tenuous, since WWII.

Alter provides a multi-dimensional portrait of an American president’s journey as a husband, father, and perhaps his most fulfilling role, as humanitarian.

In a year when the current administration scandal books are glutting the bestseller lists this is a most welcome biography of a busy 96-year-old ex-president who is still out there, with Rosalyn, working to build a better world despite the raging political storms.