His Sinful Touch (The Mad Morelands) 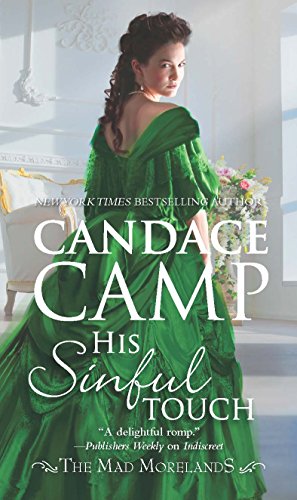 His Sinful Touch by Candace Camp is yet another a delightful romp in her Mad Morelands series. Though it is the fifth installment, the story and characters are easily understood through context.

His Sinful Touch centers around Alexander Moreland. He and his twin brother, Constantine, are the youngest children of the Duke and Duchess of Broughton. All of the Moreland children, it seems, are unique in that they all possess some sort of psychic talent, and Alex is no exception.

By holding various objects in his hands, Alex has the ability to sense emotions attached to said objects, usually those of the objects’ owner. It is an ability that he hasn’t fully explored, however, until he comes upon a beautiful young woman, Sabrina, who begs his help.

She is dressed as a man and has no memory of who she is or where she has come from. Assuming by her various bruises and her disguise that she must be fleeing from something or someone, Alex resolves to help her uncover her identity and attempts to put his talent to use by reading the few objects she has brought with her.

Alex brings her to stay with his eccentric family, some of whom are understandably suspicious of her. With their help, however, Alex and Sabrina begin to unearth her story and discover that she may have been the victim of a plot by her guardian to steal her coming inheritance.

Meanwhile, Alex and Sabrina must fight their growing attraction for each other, not only because Alex believes that acting upon his feelings would be to take advantage of Sabrina, who is obviously in a compromised position, but because Sabrina found a wedding ring in her pocket, apparently a leftover from her previous life.

Fearing that Sabrina may in fact already be married, the two are given pause to proceed romantically, made harder by the fact that there seems to exist a sort of physic connection between them as well. Before they can fully uncover the truth about Sabrina’s past life, however, a man appears on the scene, claiming to be her husband and demanding that she be returned to him, further complicating their feelings for each other.

As Sabrina’s memory does begin to disturbingly surface, Camp does a good job handling the fact that Sabrina now seems to have two separate personalities. Sabrina begins to remember that she was once a shy, demure girl, always wanting to please those around her, which is in direct contrast to her new self, which is far more daring and independent, much more a woman, especially after she succumbs to a very intimate night with Alex.

Sabrina struggles with how she will reconcile these two parts of her one self, a task Alex also attempts to help her understand and come to terms with. It would have been easy to ignore this dilemma inside of Sabrina, but in bringing it to light, Camp is able to explore a deeper side to Sabrina.

Overall, Camp does an excellent job of weaving together the many clues and strands of this story into a convincing whole. Her characters are authentic and believable, as are the supporting characters and plot lines, despite the somewhat unrealistic premise of the series as a whole. Her prose is clean and well-done, and her dialogue real and engaging.

One suspects that the next installment of the series will center on Alex’s twin brother, Con. Camp does a perfect job blending mystery with romance, and her latest in the Morelands series will surely leave her readers panting and wanting more. She has produced a solid, well-told tale that is sure to delight her fans. A very fun read!

Michelle Cox is author of the Henrietta and Inspector Howard historical mystery series.