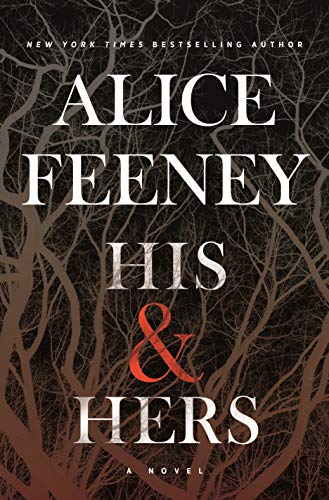 “Filled with exquisitely flawed characters and tight, dynamic prose, His & Hers by Alice Feeney may be another New York Times and international bestseller.”

The peaceful English village of Blackdown turns ugly when an anonymous caller reports a Jane Doe dead in the woods.

Rachel Hopkins, a local woman, has been stabbed to death with the message “Two Faced” written in red varnish on her fingernails.

As if something she had done meant she deserved to die.

Anna Andrews, a hard-driven news reporter, believes she’s finally climbed to the top of the professional ladder, until the anchor that she replaced during maternity leave reappears at the station, sending Anna back down a few rungs.

Relegated to covering the grisly murder in her small hometown, Anna hopes she can claw her way back up to the top and regain her spot at the anchor desk.

Arriving in Blackdown, she discovers Detective Jack Harper, head of the Major Crime Team, working the case. She and Jack have a complicated past. One that includes a failed marriage and a less than stellar rapport.

Trying to get information about the case from her ex-husband makes Anna’s situation even worse. But Jack Harper has his own set of problems.

Not only is his ex-wife a pushy reporter, hell-bent on getting under his skin, but the victim turns out to be a woman he knows intimately, making him suspect number one—if his relationship with Rachel goes public.

In the signature style of many novels of psychological suspense, Alice Feeney uses multiple point-of-view characters to heighten the drama of her latest release.

Alternating between Jack and Anna’s perspective—the his and hers of the title—Feeney presents a tangled web of backstory, reversals, and reveals as the twisted story comes to light.

To add to the complications, there’s a third perspective interspersed with that of Jack and Anna.

“I’ve read that some killers want to get caught, but not me. There would be no more fun if the game were over, and although I’ve lost a lot, I still have too much to lose. I don’t even think of myself as a killer really; I’m just a person who has decided to do a public service for the benefit of others.”

But could the “killer” be Jack or Anna? Feeney dangles the possibility in front of the reader as a literary carrot.

Feeney creates enough doubt in the reader’s mind about both protagonists that the words of the killer could belong to either . . . or neither.

Like a snake eating its own tail, who is investigating and who is hiding their crimes becomes harder and harder to discern.

Although neither is a true unreliable narrator, they don’t tell each other, or the reader, the whole truth. It’s possible they aren’t even being truthful in their own minds.

As Jack says about himself, “Truth in my work is everything, but truth in my personal life can feel like a bright light I need to turn away from.” Not to mention it’s something he hopes to keep his colleagues from discovering.

Lying by omission, and a few drinking binges, makes it impossible to know for sure who is innocent and who has blood on their hands.

As Anna muses, “People working in the media today have more power than politicians, but what good is trying to tell the truth about the world when I can’t bear to be honest about my own story: who I am, where I came from, what I’ve done.”

As the backstory becomes the present, readers discover more and more ways in which all the characters are connected and why no one is exempt from suspicion.

Filled with exquisitely flawed characters and tight, dynamic prose, His & Hers by Alice Feeney may be another New York Times and international bestseller.