The Hippocratic Myth: Why Doctors Are Under Pressure to Ration Care, Practice Politics, and Compromise their Promise to Heal 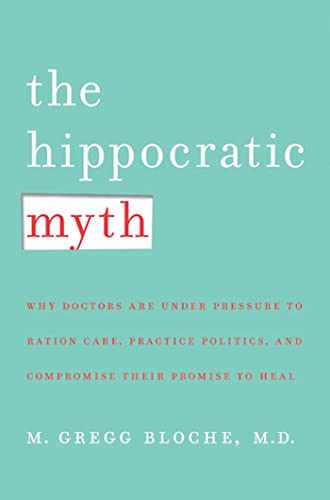 The Hippocratic oath, “I will enter only for the good of my patients”, challenges doctors to resist market pressures and social expectations. What sustained the oath’s promise of uncompromising commitment was that for the past 20 centuries, medical technology was unable to do very much, and what it did it did inexpensively. Not until the 19th century, with anesthesia and antiseptics, did the doctors begin to win over disease. The 20th century brought us X-rays, electrocardiograms, and a host of expensive technologies. Medicine became an industry-scale enterprise, and with that, began to get involved in legal issues, such as the diagnosis of insanity, fitness for combat, the confinement of the sick against their will, the compulsory vaccination of the healthy, and also public values.

The Hippocratic Myth includes case studies showing doctors are increasingly coming into conflict between patients and the demands of society, and as a result are increasingly breaking their Hippocratic oath to their patients. The premise of the book is that doctors' choices that go against the Hippocratic oath, whether in diagnosis, limit setting in care, or in support of state sanctioned violence should be made out in the open rather than continue the hypocrisy we have now—a hypocrisy that is unsustainable socially, economically, and politically, as it:

1. prevents candid discussion about politics and morality in medicine,
2. shelters prejudice from scrutiny, and
3. is dismissive of democratic mechanisms for setting health policy.

One such hypocrisy is that physicians will deny the influence of politics on their clinical decisions. For example, you pick your health plan before you get sick. The consequence is that the doctor is limited to the treatments provided by the plan. The implication is that the responsibility of rationing health care falls onto the patient, not the doctor. The claim is that the doctor who limits care isn’t betraying the patient but honoring the patient’s frugality. The truth is that doctors should not withhold care to save money, no matter who is being frugal, and this tradeoff should be open to public discussion and decision.

We are all for cutting medical expenses except when our loved one’s health is at stake, and medical necessity forbids counting costs against clinical benefits. But this is a contradiction; and this contradiction sets up conflict among doctors, patients, and HMOs. Dr. Bloche provides several cases of medical care gone horribly wrong because of cost-cutting pressures in which life-saving tests were prevented from being performed, where dangerous conditions were allowed to progress for too long. Tests were not given because conditions that would make the tests “necessary” were ruled out because the cost of the test outweighed the likelihood of detection.

And even though a doctor may prescribe a test or service doesn’t mean that it is medically necessary, and interpreting “necessity” is how health plans ration care. An HMO will almost never refuse to cover care for common practices but will also retain wide space to ration care when diagnosis and treatment come under scientific uncertainty. Uncertainty allows a doctor to pick and choose among medical opinions for the lowest-cost diagnosis—even if it means delaying critical care. That an HMO may reward a doctor for saying “no” has been approved by the U.S. Supreme Court, and Dr. Bloche quotes Justice David Souter in this, “[W]hatever the HMO, there must be rationing and the inducement to ration.” Saying “no” for reasons of rationing, depending on the context, may or may not be the same as withholding care. But withholding care is against the law.

Probabilities of discovery of a condition are weighed against the cost of the test by HMO rules. When it all goes wrong, the fact that a rationalization was made is denied by the rationalizers—because saying so in a court of law is equivalent to an admission of guilt. Judges don’t weigh cost to benefit ratios, and juries are instructed to defer to doctor opinion. Not ordering a test deemed “necessary” falls under negligence law—and is labeled medical malpractice. And so the doctor is caught between being right and being cheap. The economic value of a human life is between $5 million and $10 million, and the baseline of what may be spent per person for medical care is based on the probability detection by medical test. One example of this tradeoff is seen in the choice of mammogram versus MRI. The mammogram is less effective—but costs less. The MRI is more accurate—but costs more.

End of life decisions also provide legal room for rationing care. Given a poor prognosis, physicians will resist providing care they deem futile rather than attempt to prolong life, while family members may want everything possible done. “Medical futility” is a reason to not treat without fear of legal liability. The definition of “futility” is unclear and becomes a sheltered legal space for saying no to expensive treatment. This becomes a loophole that opens up the opportunities for hypocrisy, rationalization, and self-deception—and doctor-patient trust may be turned into what lawyers call an adversarial relationship. Taken to political extremes during the 2010 election-year campaigning, this turned into claims that Democrats won they would convene death panels for grandma.

As to general cost controls in medicine, the political stance is that costs can be cut through eliminating pure waste. There are claims that up to 30% of medical costs provide absolutely no benefit. The problem is in figuring out which 30%. Waste may only be known after the fact, and is due to the variability of the patient. One might say that the wasteful 30% of medical cost will always exist because we can’t always distinguish between what will improve life and what won’t.

In the chapter titled Doctors as Warriors, Dr. Bloch provides the backstory of the U.S. government’s dabbling in brainwashing techniques. In the 60s the CIA surreptitiously supplied LSD to unknowing subjects and a few died under unclear circumstances. This program was disclosed in 1975 as MK-ULTRA, acquired through the Freedom of Information act.

The SERE program (Survival, Evasion, Resistance and Escape), started by the Department of Defense during the Korean War was intended to prepare participants for ill treatment at the hands of their captors. The intent was to push soldiers to the edges of their endurance, so as to build resilience in those who might become prisoners of war in countries that did not adhere to the Geneva Conventions. In 2007 waterboarding participants as a training technique was dropped by SERE.

Dr. Bloche claims that there is a body of classified evidence that SERE methods were used during training settings as a means for extracting truth. However, evidence shows that individuals abused by torture will say anything to get the torture to stop. Torture may be useful for obtaining false confessions, but is a poor means for extracting truth; regardless, James Mitchell, SERE’s chief psychologist, waterboarded Al-Qaeda detainees held by the CIA, and the videotapes of the torture sessions were later destroyed by order of the CIA.

Civilian psychiatrists and academics involved in the development of torture methods needed a legal safe harbor. Where doctors’ credentials and claims substituted for medical fact, the U.S. Department of Justice approved the methods. Once approved, there would be no professional misconduct implied in their use. Doctors gave justification to lawyers who gave legal advice based on the justification by doctors, and torture was redefined as not torture. For torture to be defined as torture now, one had to intend to inflict pain and suffering—whether pain and suffering actually occurred need not be taken into consideration. Having a doctor present during torture showed that in good faith torture was not being committed.

Dr. Scott Uithol joined a behavioral science consultation team that was assigned to Abu Ghraib in 2003. In Dr. Uithol’s 33 days there, he oversaw the setting of schedules of sleep deprivation, shackling, sexual insult, and other programs of “stressors.” Each program was designed to break prisoners of uncooperative behavior. The medical information generated from each session of torture was used to plan the next. In the press, Dr. Uithol was subsequently labeled one of America’s torture doctors. In Abu Ghraib, torture was not used to extract truth, but to break down a captive’s will in phases. Phase one was intended to instill hopelessness and despair. Phase two was intended to motivate captives to comply. It gets worse. If a little torture provided a little compliance, the belief became that greater amounts of torture would yield greater compliance. Torture programs became sessions of direct physical violence monitored by doctors: a descent into sadism for the perpetrators.

That this was really happening and involving American doctors could not be kept hidden for long. The American Psychological Association (APA) task force looked into this in 2005 and generated a report. The author, Dr. Bloche, was invited to speak to this task force while it was in session but prior to his speaking engagement, the APA task force learned what he would say—and he was promptly disinvited.

The APA task force report concluded endorsing interrogation while condemning torture. Doctors would not need to concern themselves with ethics or international law, only the rules and regulations (of national security) governing their roles. The report was, in effect, a free pass for the doctors who were paid to monitor torture. The military members of the task force won out over the civilian members. In the military, all lawful orders are mandatory, and disobeying a lawful order can remove ethical and legal cover and result in career-ending censure. After the task force report was released and criticized, the civilian members repudiated it, while the military members made it part of their Standard Operating Procedures.

The APA only reversed its standing in 2010 that human rights are above national law, and one may see a timeline of the debate at http://ethicalpsychology.org/timeline/
The other APA, the American Psychiatric Association, came out against torture in 2006, but only as an unenforceable “position statement,” not as a matter of ethical standards.

Overall, The Hippocratic Myth book is an important, readable, richly detailed, and extensively footnoted mix of journalistic reportage and academic prose. While the clear language of journalism was used in presenting the case studies, the complex academic prose of analysis could have been subjected to better editing. It’s as if the author were two distinct personalities and the text crafted in two distinct styles.