The Hilltop: A Novel 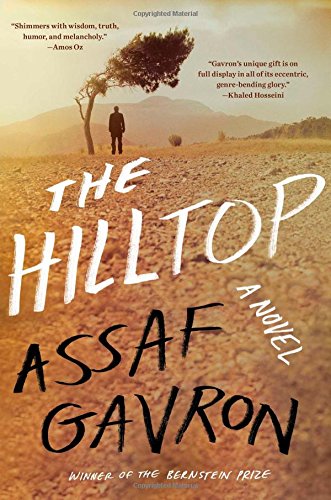 “The Hilltop is recommended to all readers who enjoy a good story grounded in current events.”

To center-left Israelis and their overseas supporters the Jewish settlements in the West Bank are poison pills that imperil the State of Israel’s Jewish character and democratic form of government, and the settlers are seen as religious fanatics.

To find out just who the settlers really are and what daily life is like in the settlements one such center-left Israeli, novelist Assaf Gavron spent two years living in Tekoa Dalet, a remote hilltop settlement southeast of Jerusalem that became the model for the fictional unauthorized settlement Ma’aleh Hermesh C in his fifth novel The Hilltop (in Hebrew Hagivah), a 448-page doorstopper with a two-page list of characters and a map of the village whose serious narrative is seasoned with satire.

Gavron describes the residents of his fictional village as a mix of families, “young couples, and singles too—some were lovers of the Land of Israel; others were lovers of serenity and nature; still others, lovers of low costs.” They include sabras as well as immigrants from Ukraine, France, and America—nearly all of whom harbor feelings of antipathy toward their Palestinian neighbors in the adjacent village of Kharmish whom they view as the enemy.

And yet when government contractors attempt to build the separation barrier between the two villages both sides oppose its construction: the Palestinians because their homes and olive groves would be on opposite sides of the barrier, while the settlers oppose any division of the land and fear the barrier would become the border of a future Palestinian state.

Ma’aleh Hermesh C’s inhabitants also include Yoni, an Ethiopian IDF soldier stationed to both protect the settlement and to post notices of its evacuation, a demise that time and again is postponed thanks to a combination of bureaucratic ineptitude, a lack of will on the part of IDF brass, and the intervention of right-wing cabinet ministers and American billionaire Sheldon Mamelstein (a fictional version of Sheldon Adelson) for whom the settlement’s playground is named. When a Washington Post reporter takes a wrong turn and winds up at Ma’aleh Hermesh C the failure to implement the evacuation enrages the American president.

The settlement’s leader, founder and most veteran member Othniel Assis is an ideologue who grows organic vegetables and dairy goats on a farm named for his oldest daughter Gitit who has a crush on Yoni. Her teenage brother Yakir and his online religious Zionist friends harass Muslim players and blow up a virtual mosque in Second Life, a multiplayer Internet game.

But the characters who are most fully developed and to whose childhoods and young adult years Gavron devotes two of the novel’s five sections are a pair of orphaned kibbutz-raised brothers, former Wall Street options trader Roni Kuper and his newly religious settler younger brother Gabi Nehushtan (a Hebraization of Kuper).

Early in the novel a penniless Roni, a casualty of the 2008 financial crash and his own risky trading strategy who has just returned to Israel one step ahead of angry investors whose fortunes he has lost, shows up on Gabi’s doorstep, and the narrative continues into 2010 interrupted by the brothers’ backstories.

After losing their parents at a tender age and experiencing ostracism and abuse on the kibbutz where they failed to bond with their adoptive parents Roni and Gabi become young adults with stunted moral development and poor impulse control. Roni becomes a driven entrepreneur and overachiever, while Gabi drifts from working for an Israeli moving company in New York, to fundraising in south Florida, to being a stay at home dad and husband in Tel Aviv before losing his child and marriage and finding purpose and community in the religious Zionist wing of Orthodox Judaism.

The two sections devoted to the brothers lives before arriving at Ma’aleh Hermesh C feature the book’s most compelling narrative prose, and within the novel’s larger context the message they convey is that the settlements in Israel’s Wild East are places where emotionally unstable people who have hit bottom can start over. But that description does not fit all the residents of Ma’aleh Hermesh C who embody the pioneering spirit of the pre-state period and whose lives even readers who disapprove of West Bank settlements can come to care about.

Notwithstanding the political satire, Gavron’s third person narration is sufficiently neutral that right-wing supporters of the settlements will identify with the characters’ plucky ability to persevere under the perpetually postponed evacuation order’s Damocles sword, while left-wing readers will come away with a better understanding of why a two-state solution to the conflict remains elusive and why it may already be too late to implement. The Hilltop is recommended to all readers who enjoy a good story grounded in current events.

Kudos to translator Steven Cohen for rendering Ma’aleh Hermesh C’s immigrant settlers’ beginners’ Hebrew into broken English reminiscent of Jonathan Safran Foer’s Ukrainian translator in Everything Is Illuminated, which is one of the many contemporary American novels Gavron has translated into Hebrew.