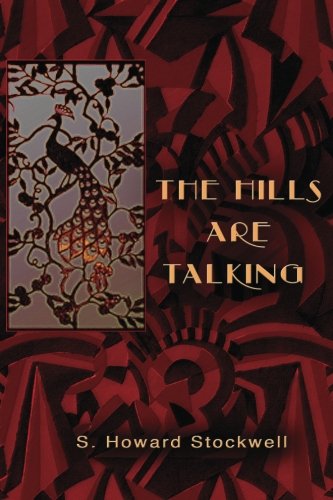 S. Howard Stockwell’s much-anticipated Volume II of her Montecito trilogy, The Hills Are Talking takes up where her first volume, which she published in 2012, The Hill Baron’s Kitchen, left us. We are once again drawn back into an irresistible love story from the roaring twenties filled with mystery, romance, art, architecture, and of course, culinary extravagance.

In the spirit of some of our country’s finest family saga writers, Stockwell’s books sweep with vigor over land and sea and not only expose legendary California families, but provide us with an erudite history lesson and a delicious banquet of gourmet food and wine. The art of creating a fictional family saga novel requires large amounts of endurance, imagination, and planning to say nothing of just plain hard work. Stockwell has succeeded admirably on all counts.

Stockwell’s debut novel begins in the year 1925 as a giant earthquake devastates the rarefied enclave of Montecito. It is in this maelstrom we are introduced to Paco, a dashing and humble delivery boy, and to the millionaires’ estates that boomed in the 1920s.

Book Two, The Hills Are Talking, can stand on its own and be read with satisfaction without referring to Stockwell’s initial effort, in which the artistic Paco Oakley begins his love affair with cooking, finds his true identity, and learns he is as rich as the many Montecito barons he serves.

The author’s obvious passion for cooking pops up with the regularity of a well-done soufflé: “By five a.m. the great ship’s kitchen was intoxicating with the scent of all these potions that formed the base for myriad dishes that would pour out during the day’s continual service under the direction of the Head Chef, Monsieur Conte-del-Beouf, always at the whims of the passengers. The pastry Chef and his assistants had already been at work for several hours producing the parade of specialties; classic breads plus hundreds of baguettes, all sorts of biscuits, brioche, croissants and popovers. So many tarts, Napoleons, éclairs, cookies and candies were created in a day that it required a monitor just to keep a count. One pastry cook was famous for cakes including the celebrated Gateau Noix, made of hazelnuts and walnuts with citron, the multi layered dacquoise and the much prized mille feuilles. They would turn out a thousand petite fours and that many ladyfingers for delicate charlottes, not to mention the hundreds of rich custard crème brûlée, carefully burnt sugar crusted just before service.”

Stockwell’s characters are well developed and they parade through the pages with spice and bravado. Their stories are firmly rooted in both the entitled world with its indulgent lifestyles of the rich and privileged as well as those who surround them and suffer unfortunate collateral damage.

Here is how she introduces her central character: “Now Paco was beyond good looking, with smiling eyes that crinkled at the outside corners and gave the impression he was always smiling, revealing a new, soft, intelligent light. Most thought of him as genuine and reliable, always generous, and a bit of a dreamer, fostering ambitions they thought were impossible, until he earned the chance to study in Florence. Paco was brainy, glib and funny with a leisurely California nature. His esthetics dominated him. Observing the details of all things was his real occupation. He had a curious way of squinting and moving his head to inspect a certain subject from many sides. Above all he was a sensual being, his slim muscular body had filled out, and overall, he had become a grown man, full blown and powerful. Paco suffered through many turns of fate, but instead of beating him down, it polished him.”

Her writing reveals an evanescent slice of that knife edge between happiness and seamy sadness. No one escapes unharmed from her prose, not the talented men and women who dance in the entitled glitter nor those who work in obscurity behind them.

Here is how she captures the crazy rhythm of the times: “Then, the moment arrived. Cymbals crashed, and the floodlights danced around, bouncing off the water in the gigantic pool that began to sparkle with diamonds, leaving the crowd momentarily dazed. Taking that opportunity, the colossal specter of Wei Min glided to center stage, and the spotlights came to rest on his magnificent appearance. He started to sway and dance, turning around and around in slow motion, causing his many garments to swing out and the golden tree, filled with doves, to float in space. The orchestra played a sweet Chinese melody, as the old Magician took each bird to his finger, made it disappear, and in its place, he lit a flame. The audience by now was glued to the unearthly sight of this huge person, topped off with a golden, flaming tree.

“Then, suddenly, the stage went dark and all was still for long moments. Just as everyone thought the show might be over, the lights came on, and the stage was filled from one end to the other, with a long line of nearly nude girls, each holding a red umbrella. They tapped out the beat, in perfect unison, with their shiny Mary Janes. The vision was so spectacular; everyone clapped madly, as the women came together, making a wall with the umbrellas. Cleverly creating a small opening in the center, a dazzling beauty danced out, and with a long red ribbon, proceeded to perform stunning acrobatic movements. She kept the ribbon flying through the air, no matter how many twists and turns, sailing upside down, down side up. When she finished, she disappeared, and the umbrellas broke apart, then formed the long line of girls that danced off.”

Stockwell has a keen and fascinating eye for detail. An eighth generation descendent of Thomas Jefferson, she has lived the Montecito high life herself and has a firm grasp on the crises that challenged each decade.

Indeed, her first book, Thomas Jefferson’s Table, clearly shows her understanding of the manner in which culture and creativity has contributed to upper class family life. This first effort demonstrated her deep knowledge for historic cuisine and helped build her gilded reputation as a food writer.

Lovers of Montecito will relish the fact that much action takes place in the storied fleshpots, restaurants, and clubs of the city—The Coral Casino, The Santa Barbara Club, The Valley Club, and the Sevilla. And so many prominent families like Ludington, Prentiss, and de Forest make cameo appearances.

Even as the terrible Depression was changing everything, Stockwell paints the party raging on: “Next in the show were the jugglers that clowned around with a huge painted pottery jug. By now everyone had plenty to drink, and the food service was almost finished. The stage went dark, and then blazed again, with spotlights on two velvet-draped pedestals. Soon, with stealthy movements, what looked to be a real tiger prowled around the base of one of the tall columns.

“Bounding with exacting cat-like grace, the animal had to be a dancer, but the skilled way he created the illusion was awesome. The tiger glowered and threatened the audience. Eventually, from out of the second column, a young woman in a gauzy slip and toe shoes, walked slowly forward, appearing not to notice the tiger, who sat up and licked his chops. Like a babe in the woods, the ballerina danced circles around the pedestals, not seeing the tiger that followed her every move from above. Finally the big cat pounced on the girl, laying her out flat as the lights went out, leaving a particularly vicious impression.”

The Hills Are Talking is full of twists and turns and takes Paco to Italy where his passions explode along with some curious insights into his family’s rather Byzantine past. The book is not without its steamy sex, deep betrayal, war, an illicit and sinister booze syndicate, and even murder, but none if it ever appears gratuitous in Stockwell’s hands.

Stockwell is not shy about lust: “Later on Paco walked Fi back to her quarters.  As they separated, they discussed meeting the next day to attempt their new crazy conquest in the city’s greatest venues. Tomorrow, undeterred by the fiasco in the Campanili, their target would be the phenomenal Uffizi Gallery. They had fantasized about selecting a spot at the foot of Botticelli’s Venus, imagining her smiling down on them from her half shell. In reality, they had to wait until the last moments before the museum’s closure, having difficulty hunting around for some privacy, passing up the Botticelli room that never seemed to empty.

“It was a long quiet galleria, with a superb black and white checkered marble floor laid out in a diagonal pattern, providing them with a hidden niche behind a large sculpture. The white marble figures were two men, one very young and one old, with extremely prominent genitals, and they momentarily marveled at the intricate detail, so carefully rendered in some unknown ancient Roman studio. A brilliant sunset became crimson, causing everything to turn rosy in stretches of light, from a solid bank of windows, overlooking the Arno. Paco sank to the glossy marble floor, bringing Fi down onto him.”

S. Howard Stockwell has invented a complex universe of colorful characters, each caught up in their emotions, desires, fears, and goals. One of her principal players, Sandro, is introduced thusly: “Seated with his back supported by the softly slanting tree trunk was Tomass Lepo Allesandro Mazzei, known by most as Sandro. His tan skin was fine grained, almost hairless, smoothly wrapping around a powerful body that clearly exposed a muscular chest with strong arms. His shirt lay open to the waist and he wore leather pants with riding boots that now stood flopped over at his side. His eyes were closed hiding the dark, almost black, color and his splendid golden curls spiraled together making a soft crown. Now he was the chosen escort, designated by heritage, as the Grandson of the old Don’s long gone best friend Fillipo Mazzei, his great compatriot in the fight against fascism.”

The Hills Are Talking is a roller coaster ride: You will learn a little Italian by reading her books, experience a lot of tender emotion, recoil from some acts of genuine horror, be dismayed over treachery, get excited by love, feel reassured by fidelity, gain an insight into art, and even perhaps build up an appetite for fine cooking.

In the process, you will also examine moral purity, ponder the ephemeral that is love, suffer heartbreak and the unbearable sense of loss, sort out the hazy aura of dreams, overcome setbacks, and disparage corruption. It’s all in there and more, just for the taking. We eagerly await the final installment in this trilogy of drama.