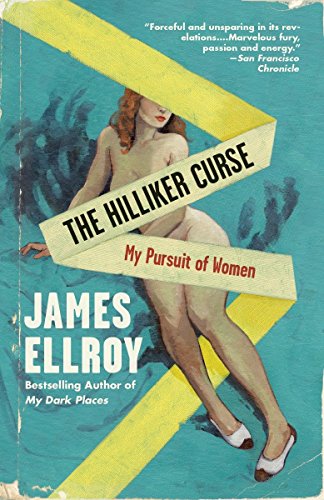 “So women will love me.

“ . . . I have spent five decades in search of one woman to destroy a myth. That myth was self-created and speciously defined. I imposed a narrative line to insure my own survival. It levied blame to suppress grief and vouchsafe my crazy passion. The Curse was half a blessing. I’ve survived just fine.

“So women will love me.

“It’s a fine raison d’etre. It’s kept me hungry and working. I am predisposed to rash and thoughtless acts in love’s name. This memoir will help me to interdict the practice. . . .”

James Ellroy, author of such crime classics as L.A. Confidential and American Tabloid, is arguably the genre’s greatest living writer. His work, as many know, has been deeply influenced by the murder of his mother, Jean Hilliker, when he was only ten.

In his earlier memoir, My Dark Places, Ellroy describes his mother’s murder, his investigation into the murder, and his exposure to details of numerous other L.A. homicides.

The Hilliker Curse: My Pursuit of Women is a more personally revealing memoir—a penetrating look into how Ellroy’s life and writing have been molded by the tragic murder of Jean Hilliker.

At age ten, James Ellroy “mandated” the death of his mother, or so he thought. He did it with the Hilliker Curse, a curse that outlived his mother and has hung everlasting over him.

Ellroy’s parents, a hard-drinking nurse and a scheming movie-industry accountant, had split up. James lived with his mother. But when he insisted that he wanted to move in with his father, Jean Hilliker smacked him—and became immediately regretful. Yet the boy, in anger, wished her dead.

Three months later Jean Hilliker was murdered, and James was sure that he had conjured her death.

Thus begins the Curse; and true to the subtitle, the book follows Ellroy’s quest for Her—the one woman he can love and protect, the woman to replace his brutally murdered mother. It’s an obsessive pursuit, alternately perverse, bullying, duplicitous, crazed, sincere, loving.

In his teens and twenties, Ellroy, homeless, lived in a park and engaged in voyeurism and breaking-and-entering—mostly to steal women’s underwear and sniff their pillows. These misguided efforts were all part of the Curse, his desperate need to see, touch, smell, and commune with Her.

All the while he was drinking and getting high on the cheap, in ways that progressively destroyed his health.
Ellroy emerges from this dark, suicidal existence, though, getting straight, getting his drug-damaged lungs cured. And using Alchoholics Anonymous, book stores, record shops to continue his stalking of Her.

Somewhat abruptly, the story takes the reader to Ellroy as a struggling but hopeful crime fiction writer with an ex-wife.

Ellroy goes on to trace his Oedipal search, the objectified femmes ranging from whores to successful, established women and mothers.

He tells of the sadness, loneliness, hypochondria, panic, and the torturous nervous breakdown that accompany his quest. He narrates a time of happiness with his second wife, but also the years of that marriage’s painful decline.

Ellroy reveals also how this hellish pursuit nurtured his writing, perhaps even fueled its greatness.

“. . . I was consumed with the hyper-feverish urge to tell stories. Jean Hilliker had been dead for 21 years and six months. . . . Now I could trump her. Now I could write her story as fiction and quash the Curse flat.”

To tell much more of Ellroy’s story would be a spoiler. Yet the reader can’t help but feel fascinated seeing deep inside the mind of such a powerfully obsessed, often deluded and self-defeating character. And that’s where Ellroy remains, throughout, trapped inside his own mind.

Readers will judge Ellroy’s behavior themselves. Everyone has a dark side, usually hidden, denied, suppressed deep within a relatively normal life. Ellory’s essential truth is that he lays open his own dark side.

And he is quite likely proud that his actions and exclamations antagonize and discomfort the reader.

The prose in this memoir is compelling—for the most part. The fast-paced curt sentences mesmerize poetically, beginning in the one-page prologue that introduces readers to this intensely revealing tale.

“. . . I write stories to console her as a phantom. She is ubiquitous and never familiar. Other women loom flesh and blood. Their touch has saved me and allowed me to survive my insane appetite and ambition.”

Ellroy’s writing pierces the reader’s brain and consciousness. Choppy sentences and fragments rush to tell his story, his pain, his anguish, his obsession. These small bursts of words have no time for deceit. They hone in on the soul:

“Deep talk, lovemaking, deep talk. On a transferably monogamaous nightly basis, with any woman who might be Her.

His words etch images on the brain:

“My mother had lost the tip of one nipple to a post child-birth infection.”

Yet the truth attained through this prose is usually sad and ugly. It’s the truth of an obsession held on to for almost sixty years.

The reader may eventually tire of the fast-paced prose, with its blithe slang clichés such as “dipshit, “splitsville,” “boocoo.” Especially since the prose chronicles repetition of the same mistakes, delusions, and deceptions into the author’s sixties. The reader may want to scream at Ellroy to find a truly good therapist.

But Ellroy has said that his writing aims for “universal meaning.”

What is that universal meaning?

That’s for the individual reader to ponder and decide—which is the most fulfilling and challenging part of reading The Hilliker Curse.