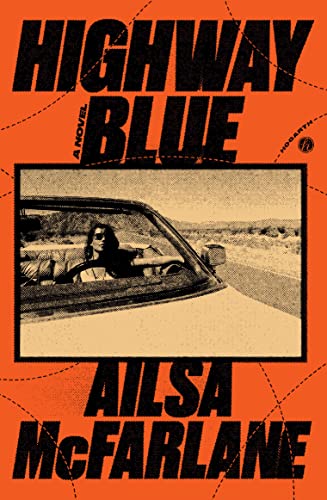 “Sometimes the highway doesn’t take you all that far.”

An old trick for when a plot isn’t moving is to make sure your characters are: Give them a destination and a means of locomotion, then let them talk their brains out. Thus The West Wing’s famous walk-and-talk scenes, policy debates galvanized by actors trotting down endless hallways. Ailsa McFarlane uses a similar approach in her debut novel, Highway Blue: narrator Anne Marie and her estranged husband Cal are on the run, and thus on the road, for almost the entire novel.

Exactly why they are running is unclear. Anne Marie has been working at a bar, renting a room in a communal apartment, and living a gray, friendless life. She is depressed, still suffering from Cal’s disappearance years ago. Now he’s back and in desperate need of money to pay Sandro Martin, a dangerous thug who almost immediately assaults the pair at gunpoint. During a scuffle Martin is killed. It’s a clear case of self-defense, but Cal is inexplicably convinced he needs to go on the lam; and despite the fact that nothing whatsoever links Anne Marie to the dead man, she is equally convinced she must go with him. They decide to ditch their bloody clothes and flee.

All of this happens by page 33, less than one-fifth of the way into the novel. The remaining 140-odd pages are set almost entirely on the highway. The fugitives appear to have a surprising amount of money, considering, and no concern they will be traced by either Cal’s credit card or Anne Marie’s cell phone, so besides watching the speed limit there is nothing to occupy them by way of evasive action; instead they just drive. Stuck in a car with the man who hurt her, Anne Marie thinks back to their life together. She also recalls her mother, who abandoned her by dying when Anne Marie was still in school. She wiggles the tooth of her memory, however painful, because life has given her little else.

Anne Marie often describes at length things she sees or remembers, as if she hopes detail might lend her pain some deeper meaning:

“Through the door there was a small room and the walls were painted dark red and they were stained with squashed mosquitoes. In one corner a big dark plant stood with heavy leaves, ugly, obtrusive, and there was a desk which took up a lot of room and behind the desk on the wall was a calendar. It was a joke calendar. It showed three men posing in kilts and they were topless and muscular and tanned and behind them rolled the soft green of some hilly countryside on the other side of the world. Under that were rows and rows of sticky notes and on the sticky notes was crass rounded handwriting, phone numbers I think, and names and things like that.”

It’s a poor vein to mine, and no more comforting a topic than her marriage, but in many ways Highway Blue is precisely about such futility. Even their driving, theoretically the mechanism powering the story, feels unproductive: They will reach Eidon, a fictional city in what is presumably a fictionalized California, without any plan or even a clear idea why it might be safer for them than elsewhere. (Anne Marie’s only family live in the area, so presumably any cop actually looking for her would head there first.)

In fact, it is the great irony of Anne Marie’s story that the minute she starts rolling down the highway of the novel’s title, both the characters and their situation became almost entirely static, even to the point of repeating the same conversations. She reminds him that he left her; he apologizes. They wonder aloud if they ever really loved one another, if they have changed in their time apart. Predictably, they come to no real conclusions.

Readers might have a similarly ambivalent experience. Nothing we learn about Anne Marie’s past reveals anything that might fundamentally change our understanding of the narrative present, still less how the story will progress in the future. Anne Marie clearly suffers her personal history as a burden, an anchor that keeps her from advancing in life. The question is whether it also becomes a burden on the novel, trapping it between a past we already know and a future that seems not to matter, freezing the characters so they can’t evolve. It’s telling that the novel ends almost exactly as it starts: with Anne Marie on the phone to her cousin, Tricia. Sometimes the highway doesn’t take you all that far.