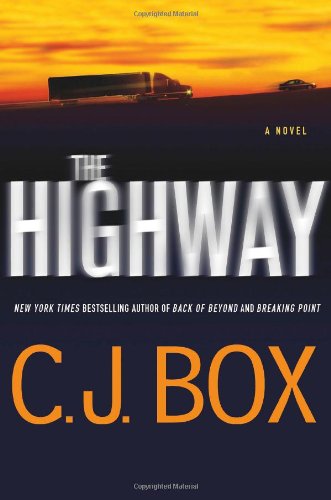 Winner of the Edgar, the Anthony, the Macavity, the Gumshoe, the Barry, and an L.A. Times Book Prize finalist, C. J. Box is deserving of all his awards. One of America’s best thriller writers, Mr. Box doesn’t disappoint his fans with his latest stand-alone novel.

Cody Hoyt is fired as an investigator for Lewis and Clark County, Montana, Sheriff’s Department for planting evidence in a murder case. He falls off the wagon of sobriety the same day. Only his son Justin’s appeal for his father’s help pulls Cody away from the bottle. Two young teenagers, one Justin’s girlfriend, suddenly disappear on their way to spend Thanksgiving with him.

Cody is certain there is a logical explanation for the girls’ sudden break in communicating with Justin, but his son is convinced something has happened to them. As an investigator Cody has heard the same fear dozens of times from family members when someone goes missing. “People always assumed the worst when a loved one was missing. Sometimes they were right.”

While Cody reaches out to contacts in law enforcement who will help him despite his unemployed status, the two girls, Gracie and Danielle, are facing a nightmare more horrible than any they could imagine. The driver of the big, black 18-wheeler, known as The Lizard King, has just trapped fresh meat in the persons of Gracie and Danielle. He is an expert in such hunts. He has been doing it for years along America’s interstates and back roads and has never been caught.

While Cody drives from Helena to the First National Bar in Emigrant, his ex-partner, rookie investigator Cassie Dewell, keeps in touch by texting him information she finds on the internet and various law enforcement websites. One interesting item she discovers is the existence of a task force investigating serial killers operating along America’s highways. Are Gracie and Danielle victims of a serial killer, a long haul trucker who picks up victims in one locale and dumps them in another.

Before Cassie can text her latest information to Cody, he also disappears off the communication grid. Worried that her ex-partner has bent the rules again and entered a suspicious religious commune without a warrant or backup, Cassie drives to Emigrant to meet State Trooper Rick Legerski, the last man to see Cody.

Legerski denies knowing Cody’s whereabouts, but there is a vibe from the trooper that Cassie doesn’t like. In fact, she doesn’t like anything about the First National Bar, the bartender, or Rick Legerski. Still, Cassie is a rookie and inexperienced, so it is possible her instincts are wrong. Then again, maybe not.

C. J. Box’s ability to explore the mind of a serial killer and in doing so create a three-dimensional character is frightening. It would make one wonder about his dark side, if he didn’t also create such wonderfully well-rounded characters whose goodness overcomes their flaws.

In The Highway the reader is taken for a terrifying ride with killers and can only hope rescuers arrive before the journey ends in a bloody torture chamber.