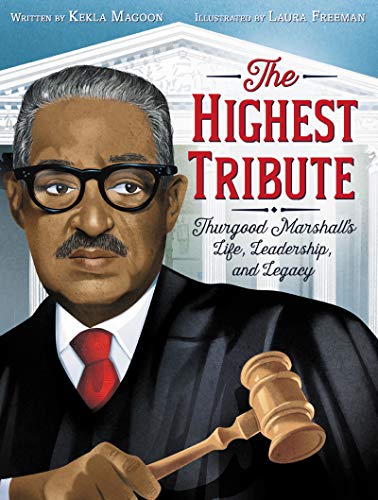 “‘The whole country knew and still knows: through his lifetime of service to humanity, Thurgood Marshall earned himself the highest tribute.’”

A towering book about a towering figure, Kekla Magoon’s The Highest Tribute: Thurgood Marshall’s Life, Leadership, and Legacy tells the story of the first Black United States Supreme Court justice, how he got there, and his lasting impact. Following a chronological timeline, the reader first meets second grader Thoroughgood Marshall, who changed his name to Thurgood, the first of many things where he decided, “if there something he didn’t like about the world, he should try to change it.”

Growing up in segregated Baltimore with supportive parents who “were determined to see their children break boundaries the country’s laws had set for them,” Coretta Scott King Honoree Magoon traces Justice Marshall’s determination and drive to change segregation laws in this country. As a child, Marshall saw what “separate but not equal” looked like: separate Black and white restrooms, water fountains, stores, and theatres. And after misbehaving in class and having to read the Constitution of the United States as punishment, Marshall instead “loved learning about the law” and began to question quite poignantly how segregation laws that treated people differently exist if “all people are equal.”

Coretta Scott King Illustrator Honoree Laura Freeman delivers inviting digital artwork to this moving biography, presenting Marshall as he moves along his fight for fairness and equality. In high school, Marshall joins the debate team, where he learns about teamwork, how to win arguments, and what it means to use words and ideas to unpack complicated issues. He continued on the debate team in college and participated in the first interracial debate between U.S. colleges. Marshall went to an all-Black law school (like his college) because segregation meant Black students could not be admitted to his preferred schools. These experiences made him even more determined to “do what was necessary to change unfair laws.”

As a young lawyer Marshall won a case that questioned a school’s whites-only admission policy, “resulting in the nation’s first court order to desegregate a school.” As he matured, Thurgood “Mr. Civil Rights” Marshall became even more of an activist, “each case was one piece of his plan to make the United States a fair and equal place for all people.” In his most famous case, 1954’s Brown v. Board of Education of Topeka, Marshall presented before the Supreme Court of the United States—and won! His victory meant schools across the country could no longer be segregated. He would go on to win several other cases before the Supreme Court.

Magoon shows Marshall in his personal life as well. After his first wife of over 25 years dies, he remarries and has two children. His second wife Cissy was Filipina. Their interracial marriage was controversial at this time; it would be 12 more years until the Supreme Court struck down the ban on interracial marriage. As Magoon notes, “Thurgood didn’t care what people thought,” since he loved his wife and children, and yet, here was another example of societal unfairness and inequality.

Marshall’s successes as a powerful attorney certainly got the attention of many, including U.S. presidents like John F. Kennedy and Lyndon Johnson. They asked Marshall to be a judge, where he got to decide the outcome of a case. So Marshall became a judge, then solicitor general, and ultimately was nominated to serve on the Supreme Court, where he stayed for 24 years. “He was no longer a young Black boy from Baltimore, limited by unjust laws. Now he was one of the people who made sure the laws were fair.”

The backmatter in The Highest Tribute: Thurgood Marshall’s Life, Leadership, and Legacy includes a timeline of Justice Marshall’s life as well as information about his major court cases, and additional reading suggestions. Magoon’s factual depiction of Justice Marshall’s life culminates on an intimate note, where she describes his death at 84 and was honorably laid in state in the Supreme Court rotunda: “The whole country knew and still knows: through his lifetime of service to humanity, Thurgood Marshall earned himself the highest tribute.”

Michael Genhart is a staff reviewer for New York Journal of Books.