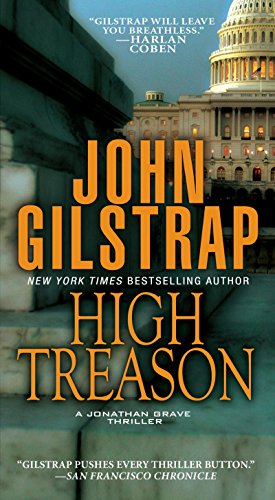 High Treason is a high-action thriller, the fifth book in the Jonathan Grave series.

The story begins in a dark part of town in South East DC. Six United States Secret Service agents are outside the Wild Times Bar. An armored Suburban idles at the curb. Enjoying another late-night party inside the bar is the First Lady of the United States (FLOTUS).

Then everything happens at once. Without warning, there is an explosion. A gunfight ensues. When the gun battle ends, the entire security detail for FLOTUS is dead, and the First Lady has been kidnapped.

Almost one week before, an attack on an airline at the O’Hare International Airport in Chicago killed 173 people. Terrorism is suspected, yet not confirmed.

The build up of suspense in the first two chapters is excellent.

Freelance hostage rescue specialist Jonathan Grave is on his way to meet with the Director of the FBI, Agent Rivers, or Wolverine. Rivers often calls on Grave for missions that require handling outside of the law. Senior members of the White House are present at the covert meeting, including the president’s chief of staff.

Grave hates politics. When he learns the reason for the meeting and receives his instructions—to track down and rescue the First Lady—he is reluctant to get involved.

Meanwhile, journalist David Kirk receives a phone call from a trusted news source, rookie cop DeShawn Lincoln. DeShawn tells Kirk he has knowledge of a Government conspiracy and requests a meeting. Kirk wonders if there is a connection between the airline attack and the kidnapping of FLOTUS. In DeShawn’s voice, Kirk hears fear and a touch of panic. He agrees to the meeting.

What follows is a complex and twisted plot. As Grave undertakes his new and secret mission, he unearths shattering truths about the President, FLOTUS, and the Secret Service. Simultaneously, reporter David Kirk is also uncovering information that will put his life in danger.

While the build up of suspense is excellent, and the plot chilling, some readers might consider parts of the story line unthinkable, if not improbable. FLOTUS’s background is certainly one such point of contention (vague to avoid spoilers) and begs an early question: How does someone with her personal history wind up as the First Lady? While the answer is provided further into the novel, it might still strain credulity for some readers.

The author shares his extensive knowledge of and proficiency with weapons and explosives, which, at times, tends to slow the pace. At over 500 pages, the book is long. Perhaps some of the arms information could have been trimmed.

As implausible as the mission may seem, more improbability lies with the ragtag team Grave brings along with him for the assignment. But the disparity of personalities, abilities, and experience makes it an amusing and mostly enjoyable read. Perhaps more entertaining than thrilling.

Although slow in places, High Treason is a well paced, well written suspense. The character development is good. When dealing with crime of this magnitude, violence is an essential element, yet the author keeps the more gruesome details to a minimum, sparing the more sensitive readers and trusting them to draw an accurate conclusion.