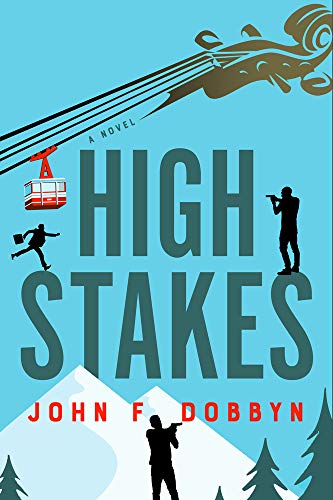 “This is a very entertaining novel, full of local color equally in Boston, Romania, and Istanbul, where the author dwells lovingly, with the finesse of a gourmand, over the many meals the characters consume, while weaving an intriguing plot.”

As reward for saving his grandson from a prison term, Han Liu, head of the Chinese Merchants Association in Boston’s Chinatown, offers Attorney Michael Knight a free vacation to a resort in the heart of Romania’s Carpathian Mountains.

Being recently married and with such a heavy caseload he hasn’t seen his bride very much, Michael is delighted.

“My immediate response should have been, ‘Thank you, but no thank you.’ But the mouse bit the cheese. I was oblivious to the second shoe about to drop.”

Mr. Liu has a small favor to ask: Will Michael pick up a purchase and bring it back with him? A violin, a Stradivarius, to be given to the concert master of the Boston Symphony.

Michael agrees, but no sooner do they arrive than wife Terry is abducted by men who want the Strad. She’s rescued but not without loss of life on their side, and plenty more to follow.

When the couple arrive back in the States, Michael discovers Mr. Liu dead, and his bodyguard switches his allegiance to saving Michael’s life—twice.

Making certain Terry is far away from Boston and safe, the young attorney finds himself facing a powerful contingent of criminality—the Boston segment of the Chinese tong, a group from the Russian mafia, and Romania’s own version of a crime family.

What do they want?

Not only is the violin valuable because of its maker but sometime in the 17th century, a code was carved into it, a code that will lead to a treasure hidden away by Vlad Dracula, ruler of the country in the 15th century. That’s right—Dracula of Bram Stoker fame, or rather the man on whom Stoker based his vampire.

“Tell me, what do you know about Dracula?”

“Ahh, you mean the vampire? Bea Lugosi? Bram Stoker’s novel about the so-called ‘undead.’ All that stuff about garlic necklaces and wood stakes and . . . “

He held up a hand. “None of that. I’m talking about the real Dracula, flesh and blood, a very real person.”

Realizing that if any of the three get their hands on the Strad or the treasure, they will have enough money to spread their corruption more fully around the world, Michael devises a plan to find the treasure and foil the Russians and the Chinese while managing to remain alive.

To do this, however, he has to make an ally of the third member of the groups menacing him—the Romanian crime syndicate.

This is a very entertaining novel, full of local color equally in Boston, Romania, and Istanbul, where the author dwells lovingly, with the finesse of a gourmand, over the many meals the characters consume, while weaving an intriguing plot.

Though there is historically no evidence that Vlad Dracula left behind a treasure, it’s an intriguing premise, and one the author makes into a definitely engrossing story.

The characters are well-developed and remarkably likable, especially the Romania crime boss George, and Mr. Liu’s bodyguard, Mickey. Though Michael’s business partner Devlin and ADA Billy Coyne play only a secondary role, they will be well-recognizable to repeat readers of this series.

With descriptive passages and many well-chosen turns of phrase, the story has its violent moments but they aren’t played for bloodily realistic  gore-and-destruction but for more of a flippant, smart-talking crime noir, if such a term may be used.

It’s an adventurous read, with a very satisfactory ending and characters the readers will enjoy.