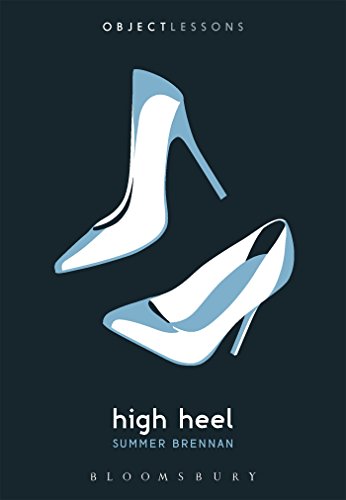 Summer Brennan takes on much more than just the high heel. This book is written about a shoe but also examined sociologically, esthetically, physically/bodily, fetishistically, symbolically, mythologically, etymologically, and historically but also though the eyes of a feminist, a misogynist, a skirt chaser, and historian as well as supposedly normal peers. This is just a sampling of what the reader can expect from its content. You will be given the past, present, and future of the high heel via any number of references and facts that surround it through the ages.

“it is hard not to despair that when one follows this rhetoric to its logical conclusion, which is that ‘sensible’ shoes are unfeminine, and ‘feminine’ shoes are not sensible, therefore to be feminine is to be without sense.”

The book also includes first hand stories about what the shoe represents to her as well as the perceptions and power that these shoes possess. Each section of this diminutive book is filled with facts, tales, and morsels of information as well as anecdotes all centered on the high heel.

“High heels or their predecessors have been denounced, then defended, and then denounced again, denigrated and made quasi mandatory by the same cultures, both at the same time.”

Approximately midway through the book Brennan takes off on a series of scientific, mathematical, and anthropological tangents that lead the reader through some mind bogglingly overwhelmingly overly informational data. Honestly, the segment is very off putting as it comes off very dry and overly intellectual like some arcane esoteric thesis that steers the book into obsession!

This second half of the book deals with shoes and the parts they play in everything from literature, fairy tales, music, ancient Asian history, and more erudite topics than anyone needs to know about. In the end Brennan turns this into a sort of feminine manifesto in which women have suffered for their beauty and been victim to a high heel among other sources of supposedly imposed beauty. Most of the section morphs into more of a history lesson than an engaging and enjoyable read unless of course you feel the need to know every bit of minutiae when it concerns how women and men were shod from the beginning of time.