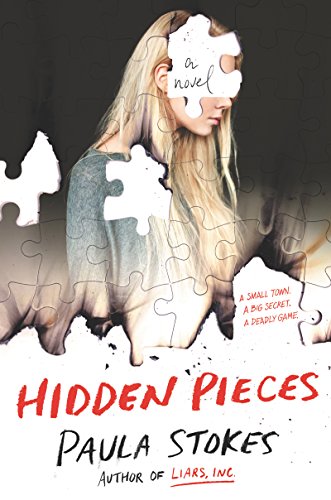 A small town. A big secret. A deadly game. A dark, contemporary thriller.

The first paragraph sets the tone of the rest of the novel. “There has always been this gap between the person I am and the person people think I am . . . But I keep a lot of secrets . . . My inner pieces? I don’t show those to anyone.” The cover of the book shows the outline of the puzzle, but we can only make a guess about the picture.

Embry, at 17 years of age, has had to face many trials and tribulations in her short life, such as her mother’s illness, her father’s abandonment of both of them, and two boyfriends, each vying for Embry’s love. However, she feels that she must keep these a secret even from her mother, whom she loves and cares about.

While her first boyfriend, Luke, joins the army and is stationed in Afghanistan, she meets Holden Hassler, with whom she enjoys passionate sex. When Luke sends her an email proposing marriage that would help her mother financially, Embry is in a quandary. She really doesn’t love Luke anymore but can’t bring herself to confess. So she decides to keep this a secret as well.

Holden is the only person to whom she can reveal her true feelings. She also feels guilty that she took Holden away from her best friend, Julia, who doesn’t know. Embry can’t tell her because she’s scared to lose Julia. So far, her secrets are not affecting anyone else except that she has to lead a double life.

Then an unexpected event occurs which she secret at all costs. It is the fire that flared up at the Sea Cliff Inn when she was with Holden. She rescues a homeless boy from the fire and overnight becomes a hero to her classmates and the town. Although she knows that this is far from the truth she must behave like a hero.

Outwardly, Embry behaves as if nothing is wrong. She helps her mother in their restaurant, goes shopping with Julia, and attends her classes. Wracked with guilt inside, she and Holden think that they can take this terrible secret to their graves.

Until she receives an anonymous note. Someone else was there that night and is threatening to expose her if she doesn’t obey his commands. She’s forced to make impossible choices, until the threat becomes murder.

The author gives us relief from the frightening situations such as when she describes the fun Embry and Julia have on their shopping trip. They laugh and squeal with delight when trying on dresses. But when Embry arrives home she finds a threatening note. If she doesn’t reveal the truth about the fire at the Sea Cliff Inn, someone she loves will get hurt.

The suspense continues to build up when she sees a man in a brown bomber jacket and baseball cap hanging around her home and when she meets Holden in the Pot Hole near the beach. “I start to let my eyes fall shut, but suddenly there’s a flash of movement. A shadow crosses my field of vision—a shadow from inside the Pot Hole. Someone is watching us.”

The book is full of uncertainties: Will Embry confess to Julia? Will she finally tell Luke the truth about Holden? Will she discover the blackmailer? And when the stakes become so high that it might lead to murder, will she finally reveal what really happened at the Sea Cliff Inn the night she spent there with Holden? Embry has a moral dilemma but makes a decision. “But the truth is, there’s been one right choice the whole time . . .”

This thriller is about friendship, betrayal, and character development. Unlike other thrillers, it is almost impossible to guess the identity of the blackmailer and it comes as a complete surprise. Although at times the narrative becomes melodramatic, this book has all the characteristics of a suspense novel.