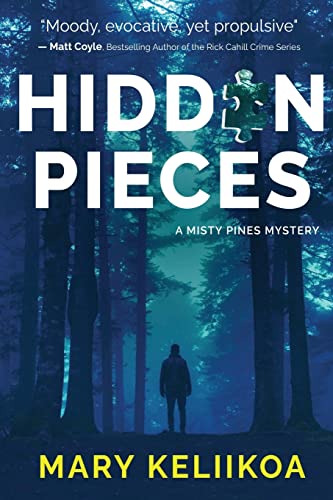 The loss of a child is heartbreaking; it can either make or break a marriage and tear a parent apart to the point of no longer wanting to go on. This is the case with Sheriff Jax Turner. His precious daughter Lulu passed away five years ago from cancer, and since her death, his life is nothing but a living hell. Unable to share his grief with his beloved wife Abby, he is now alone and a shell of a man. His job as the head of law enforcement for the tiny town of Misty Pines, WA, is suffering too, and he depends on his deputies, many of whom are rookies.

Despondency weighs on Jax, so he goes to a deserted beach with the intention of ending his life. What is his reason to live with both Abby and Lulu gone? Life does not hold meaning for him any longer. He remembers the happiness he felt as a dad and husband, and the dollhouse and furniture he is still carving for the daughter—a toy which will never be used. With "good-bye" letters secreted in his glove box, he pushes the cold, metallic gun barrel into his mouth.

"His throat closed, and he forced a swallow. Quit stalling. Eyes squeezed shut, sadness flooded his chest. Regret shoved him. Don't think. He drew in the cool air through his nostrils one more time. Held it. Waited. Was this what he really wanted?"

When his radio comes to life with his assistant Trudy calling him, he wonders if he is imagining her voice. But, no, she continues trying to reach him, and the panic in her tone makes him respond. She reports local teen, Allison Krueger, did not get on the school bus and is missing. He suggests she contact his top deputy, Chapman, to handle this, but remembers Chapman is on a fishing trip in Alaska. Reluctantly, he returns to the office, planning to finish what he started after he locates the child.

Jax heads to Allison's farm outside of town he finds her mother Emily in a panic. A single mom after her husband left, Emily insists Allison is not one to disappear without a word, especially regarding her best friend Kylie, who hasn't heard from her.

Now, four hours since Allison's disappearance, Emily contacts everyone she can think of who may know where the 14-year-old could be, and with nothing to report, she needs Jax's help. She admits she and Allison quarreled but states it was not something to make the teen run away.

Kylie discloses problems Allison between her on-again-off-again boyfriend, Dylan, and she adds he almost didn't make it to the bus that morning. Knowing he must talk to the young man, Jax also understands the kid's dad, Commissioner Troy Marks is going to give him a tough time. They are adversaries, so he is prepared for a battle when talking to Dylan.

The school bus driver informs Jax of seeing a black SUV on the deserted road where Allison lives. Soon after an all-points bulletin is posted, a deputy locates the empty vehicle near Osbourn Park. Inside he sees Allison's backpack. With heart pounding, Jax races to the site, remembering another abduction from years ago, culminating in the murder of a teen. A repeat crime?

Digging through the backpack, Jax finds the expected belongings of a teenage girl but is surprised to see a container of chew, a very unlikely item. As he and the deputy comb through the area, they spot Richard Johnson who is fishing. Jackson runs upon seeing the sheriff, but Jax catches him and grills him about Allison's whereabouts. He admits he knows nothing, so Jax has Trudy run information on him. In the interim Jackson complains his uncle will "go ballistic if I don't bring back his car." Jackson's uncle is Vince Wallace, superintendent at the orchard next door to Emily's home. Jax is determined to find out how the backpack ended up in his back seat.

A search commences at the farm with Jax realizing Wallace is acting shady. He refuses them access to the farm stating the owners would not allow it without a warrant. Jax soon learns his nephew Richard, also known as Rick, has a record for raping an underage girl, though the kid states she was his girlfriend, and the sex was consensual. His background and Wallace's shiftiness raise red flags, and Jax believes something is amiss. His gut tells him Allison is there, so he desperately needs to search the property.

Meanwhile, psychologist Elena Massey, marries Allison's father after he left her and Emily. But their marriage soon collapses after Elena tries to care for her older brother, Steven who suffers from mental illness. She neglected Allison's dad, causing the divorce.

The plot thickens as Jax learns about the abduction of Elena and her sister Maddy 25 years ago. Elena escaped but Maddy was murdered. With the cases so similar, the sheriff wonders if they are tired, especially finding out Elena still considers Allison her stepdaughter.

Elena tries to reach Steven, knowing he vowed revenge after her attack and Maddy's death. She wants to find out if he abducted Allison. She becomes terrified when he does not answer her phone calls. When Jax interviews her, she does not want to mention Steven, hoping he is innocent in all this. But is he? Especially with the knowledge of Elena's closeness to the girl.

With thoughts of ending his life now gone, Jax is determined to save Allison and try to mend his own life. When he discovers shady dealings at the farm Wallace is overseeing, he notifies the FBI—and Abby, the head agent, his ex, and one he loves more than life. Will Jax be able to pull himself together, get over his grief, and find meaning in his life?

Hidden Places is an intense novel offering hair-raising twists and turns and differing plots making it difficult for the reader to discern the culprit. Surprises arise to give the story more power and excitement. A page-turner up to the conclusion, this is an exhilarating and spine-tingling read.