The Hidden Language of Baseball: How Signs and Sign-Stealing Have Influenced the Course of Our National Pastime 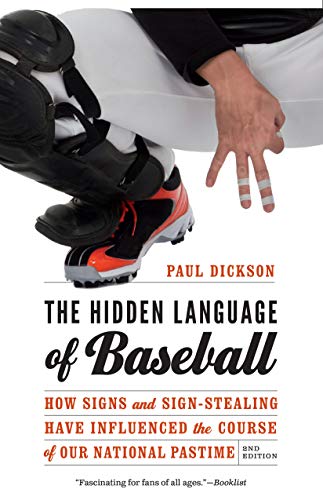 Paul Dickson is baseball’s Duke Ellington. His “band of books” have enhanced our appreciation of the game. Dickson has written more than a dozen books about baseball. His Dickson Baseball Dictionary was named by the Wall Street Journal as one of the five best baseball books ever written. The Hidden Language of Baseball was first published in 2003. This second edition is essential reading for the fan who thinks he or she knows everything about the game.

Dickson throws a lot of history and anecdotes at the reader. He explores and explains the game within the game. The book is similar to a chess handbook. His “Extra Innings” at the back of the book is a glossary of what he defines as signs, signals, and tip-offs. There are 70 terms listed. If they were placed on a college entrance exam enrollment would drop. To understand the game of baseball one has to master the hidden language of baseball.

Dickson’s appreciation for the game came from his family.

“It took me a while to figure out one of my great-grandfather’s best baseball lessons: that there is an inner complexity to the game not readily apparent to those in the ballpark or those who watch on television. And there is no better reflection of baseball’s inner workings than the rich, largely unspoken sign language that has guided the course of games for almost 150 years. I would argue that it is one of the elements that most distinguishes baseball from other sports.”

According to Dickson a nine-inning baseball game consists of hundreds of silent signs given and received. Some signs are false signals, others are simply routine instructions given to a player. Even umpires have signs that they share.

What Dickson primarily writes about is sign-stealing. This is very much a part of the game and its lore. He explains how different situations demand different signs. He informs us that the game is one filled with deception. There are also limits.

“The long-established code says that the use of mechanical or electronic devices or the use of anyone not in uniform or outside the confines of the ballpark constitutes cheating.”

In his book, Paul Dickson’s comments about the early history of baseball is fascinating. He writes about how the game became popular among soldiers during the Civil War. This is followed with references to a number of baseball legends and how the hidden language of baseball was a key part of their game. Ty Cobb is at the top of the list.

Dickson’s encyclopedia knowledge of the game is on display throughout The Hidden Language of Baseball. He even explains how a game should be watched. This is important information since the game today is under pressure to reform itself and make it faster and more enjoyable to a younger audience. The best defense against this is perhaps found in Dickson’s book.

“One of the great advantages of baseball is that it is played at a pace that allows time for the spectator to speculate on the next managerial decision before it happens.”

Baseball like so much of our society is changing because of technology. Everyone seems to have a phone or a camera. Notice how players now hold gloves in front of their mouths (when talking) in order to prevent a sign from being seen and stolen.

Baseball however remains an ethical game. It speaks to something deep inside us. What cannot be hidden is the joy so many have for it. The language often spoken and expressed inside a ballpark is one of love. Paul Dickson teaches us how to continue “romancing” the game.