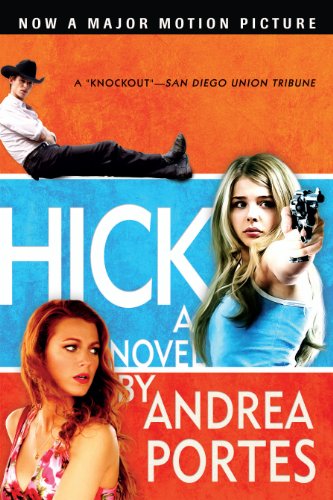 “Slated for film, Hick is a gripping, gut-wrenching story depicting the harsh realities of the life of a young, defenseless runaway. Written in the first person from Luli’s point of view, the tale is poignant, brash, and heartbreaking.”

Thirteen-year-old Luli Cutter lives in Nebraska with her parents, Tammy and Nick. When they aren’t drinking, they are fighting, and more often than not, they drag Luli with them to the local bar. It is not unusual for Ray, the bartender to take Luli home because her folks are too inebriated to drive.

One morning after yet another bender, Luli awakens to find a well-dressed man sitting in the kitchen. After she questions him about what he is doing there and how he got in, he introduces himself as Lux Feld. He states casually that the door was open, and that he is supposed to meet her mother to discuss investments with her. At 8:00 in the morning?

Tammy stumbles onto the scene, hung over and disheveled, but upon seeing Feld, she rushes to dress. She returns only to depart with Feld, leaving Luli with the gut feeling she is gone for good. When Nick learns Tammy has taken off, he, too, makes tracks, giving Luli the excuse that he needs to attend to some business. Luli knows different, for Nick has never attended to any business as long as she’s been alive.

Alone with an empty stomach and no food in the house, Luli plans her own getaway. She steals Tammy’s hidden stash of $200, and grabs a change of clothes and the .45 her uncle has given her. There is nothing to stick around for, so she ventures out of her hovel of a home, planning to find a better life and someone who cares.

Luli starts hitchhiking. A gawky young man named Eddie picks her up. She tells him she is headed for Vegas, hoping he is heading the same way; but after being with him a short while she realizes the guy is stone-cold crazy. She confronts and sasses him, so he promptly pitches her out of his truck.

Left in deserted farmland in the middle of nowhere, Luli settles in for the night, planning to sleep in a ditch, until a woman startles her by using the nearby brush as a bathroom. Luli alerts her of her presence and strikes up a conversation, learning her name is Glenda. Glenda initiates a warped friendship with Luli, offering her a ride. Along the way, Glenda snorts cocaine—even offering some to Luli!—then devises a plan for them to rob a small store. Unfortunately, the robbery does not turn out as planned.

Glenda later stops to see her friend, Lloyd, and they encounter Eddie at Lloyd’s home. Glenda pushes Luli off on Eddie so she can be with Lloyd, leaving Luli abandoned yet again. On the run once more, Luli is soon overtaken by Eddie who holds her hostage in a hotel room where he ties her to the bed and rapes her.

Caught like a fly in a spiderweb, Luli realizes the grass may not be truly greener away from home. Will she be able to escape from this lunatic or will she be left in this nasty hotel to die before her time?

Slated for film, Hick is a gripping, gut-wrenching story depicting the harsh realities of the life of a young, defenseless runaway. Written in the first person from Luli’s point of view, the tale is poignant, brash, and heartbreaking.